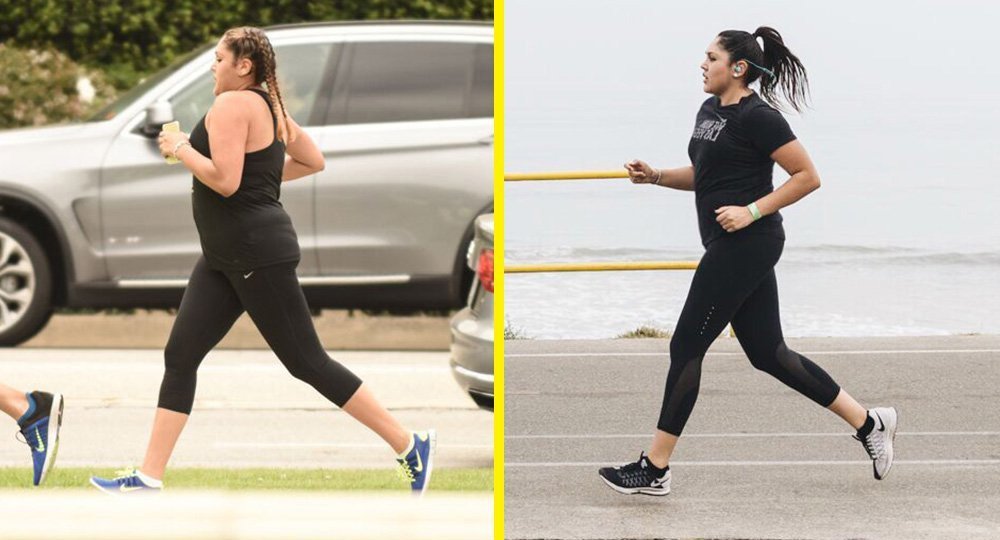 Growing up, I didn’t think twice about healthy eating. We ate a lot of greasy Mexican meals, but I stayed pretty slim because I played softball.

When I started taking uni courses full-time and working on the side, I began to pack on the pounds. I had a gym membership, but dreaded going. I spent a lot of time commuting, which usually meant stopping for fast food almost every day.

By the time I finished college, my clothes didn’t fit anymore.

THE CHANGE
Last summer, I went shopping with some friends. We took a photo together while we were out, and I was horrified when I saw it. I couldn’t believe how much weight I’d gained.

Not long after that, I visited the doctor. I stepped onto the scale for the first time in forever and cried when the doctor told me I weighed 92kg. I knew I had to do something.

THE WORKOUTS
After hearing about Nike Run Club, I decided to try it out. I went to a meet-up specifically for beginners where they taught us how to stretch and prevent injury. I couldn’t even run a half-mile without stopping. I seriously struggled, but I pushed myself to keep trying.

The more I stuck with it, the better I felt. Having other people to cheer me on helped me run farther than I ever thought I could.

THE FOOD
I’ve got to be honest, changing my diet was a lot harder than starting to exercise. I still eat the classic Mexican meals my family makes, but I don’t stuff myself anymore.

Other healthy changes I’ve made include cutting out fast food, ditching potato chips, and starting to eat breakfast. Now I love to start the day with whole-wheat toast topped with peanut butter and a banana or a fruit and veggie smoothie!

THE REWARD
Joining running groups not only helped me conquer 22-km-long runs, but also gave me a support system of friends I never had before.

I have so much confidence now, and know that I can tackle any challenge. Now I’m training to run my first half-marathon. I even plan on running the L.A. Marathon next spring!

DIANA’S NUMBER ONE TIP
You have to let yourself be a beginner at first. When you try something new, you’re going to feel uncomfortable and get frustrated at times, but that initial struggle is worth it.

I thought I was going to pass out the first time I ran, but my life has completely changed because of it!

Related posts:
07/01/2018 Diet & Food Comments Off on How I Learned To Like Running And Lost 14 Kgs In The Process
Diets News