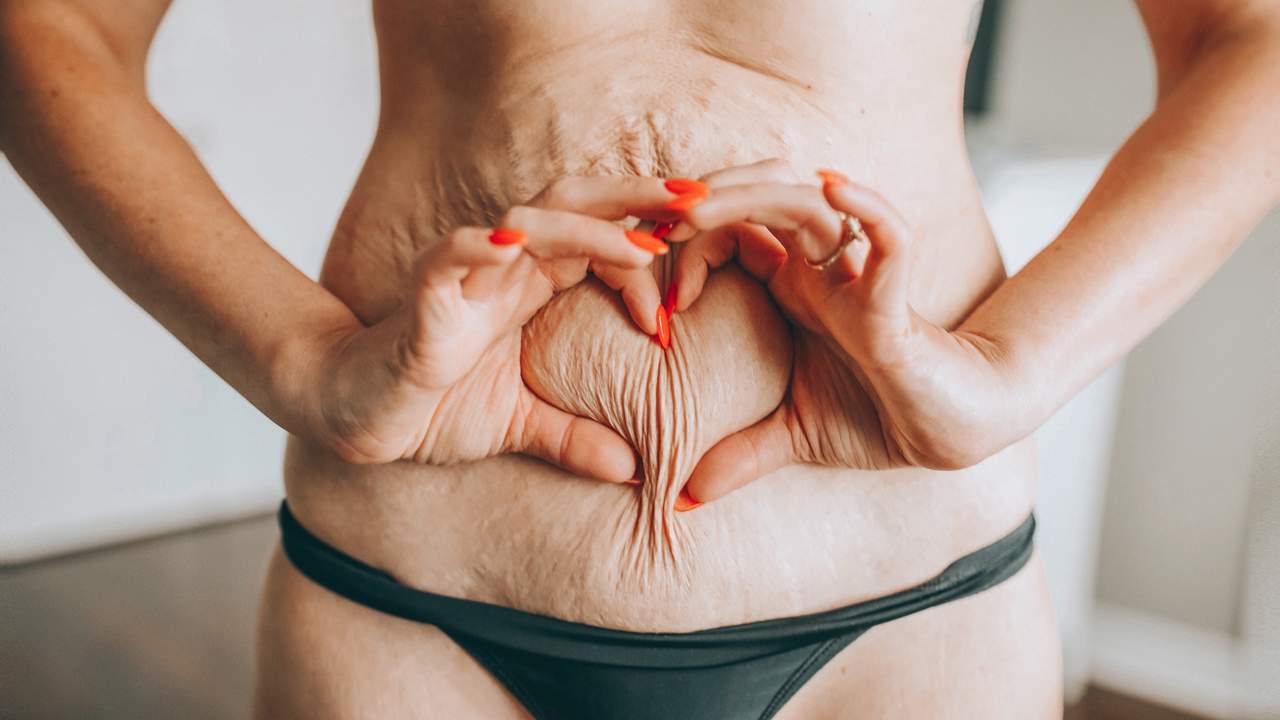 Weight loss can sometimes come with a loss of confidence. That’s what happened to Sarah Nicole, a 33-year-old influencer based in Canada—who on Sunday shared a powerful message about finally learning to love and honor what she called her “imperfectly perfect” body.

After having three kids, Nicole lost 100 pounds. It was a major win for her health, yet she continued to struggle with her body image. Yet instead of bashing her shape, she took to Instagram and posted a photo of herself in a sports bra and underwear, her hand over her stomach. In the caption, she wrote about accepting the body she’s in and all that it’s done to make her the woman she is today.

“Stop worrying so much about not looking like you’re a brand new and shiny human,” she wrote. “Because you’re not. You’ve lived. Loved. Experienced. Your body in its own way will show itself through those memories.”

Lately I’ve been drawn to imperfectly perfect bodies. I think in the process of grasping my own beauty amidst scratches and dents, I’ve begun to absorb it everywhere around me. Taking it in with awe. And then this morning laying in bed I was looking at room decor and inspiration and kept finding myself drawn to these old pieces mixed along with the new. The shabby chic, the roughed up tables and chairs and pieces passed on from generations before. They don’t look out of place amongst the new and shiny, they stand out because they look like there’s more to them, stories and memories…just more. Then there’s the refinished ones. The pieces that someone saw as beautiful and built upon that. I guess that’s how I feel about tummy tucks, and I’m asked about that a lot. Someone told me that she felt she wasn’t as strong in self-love because she’d had one. But I disagree. I think it takes strength and love to make big decisions for yourself like that. To own that choice. To refinish. The stories and memories, they’re all still there. They don’t go away with a little love and care and the buffing out of scratches and dents. The point is? Stop worrying so much about not looking like you’re a brand new and shiny human. Because you’re not. You’ve lived. Loved. Experienced. Your body in its own way will show itself through those memories. Whether you live it out shabby chic or get refinished, it doesn’t matter. Because ultimately you are something that has grown in worth, not lessened. Not one bit.

Though many of her posts on @thebirdspapaya are flawless photos taken with her family and friends, she tells Health that it was important to share this particular message of self-love.

“I found myself faced with so much self-loathing and worked my way through that and realized I had worth,” she says. “Even amid the scars and stretch marks, I still had beauty. I knew that if I felt this way, others must too. So I decided to be vulnerable and put it out into the world to share.”

This wasn’t her first candid body positivity post. Last month, she shared a similar image of her stomach with another inspiring caption.

I guess since it’s impossible for a heart to grow stretch marks, they had show on your skin instead. So they could tell a story. A story of growth, love, sacrifice and a body that is capable of miracles. See them for what they are, and they’ll lose their power over telling you what you are not. These are not marks of weakness, but of strength. You don’t have to love them, because that’s a pretty hard ask. But don’t for a second allow them to make you feel like less. How much sense would that make? Your body grew children, and it shows signs of that. Or maybe you lost weight. Maybe you just grew. Your body is strong and capable, and these are the marks of proof. ❤️

“These are not marks of weakness, but of strength,” she wrote in that post, referring to her stretch marks. “You don’t have to love them, because that’s a pretty hard ask. But don’t for a second allow them to make you feel like less.”