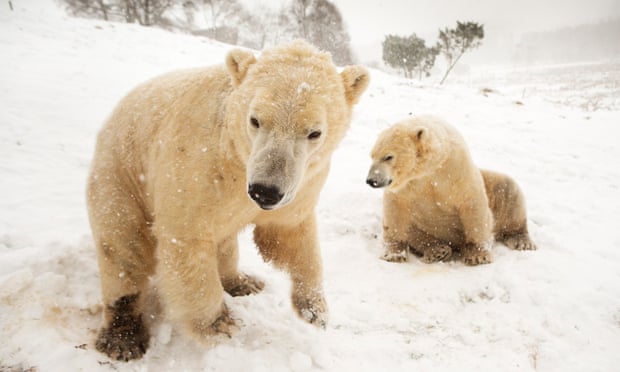 It’s been a while since I had a race. The last one was a 10km fairly soon after the New York marathon, and my legs were either still very much recovering, or had just decided to go AWOL that day. That was a few months ago, and I’d forgotten the pre-race nerves. Half “oh god this is going to hurt” and half “why am I nervous? No on cares except me!”

So I felt a bit jittery lining up for the first Winter Run 10km in Central London yesterday. When they set the race date as February 1st it was clearly odds-on that the weather would cooperate, and yesterday’s temperatures were doing their best to help with the atmosphere. Polar bears offering warming bear bugs before and after the race had their work cut out. The fake snow showers had to battle against an icy wind blasting the snow away – a particularly weird wind tunnel effect in the loop of the course around St Paul’s had me almost at a standstill, if momentarily.

Back at the start, the wave system was a bit peculiar. Instead of colour coded or numbered waves, as per usual in these big races, you were emailed a start time. I was supposed to start at 9.30 but despite arriving in plenty of time and making my way to the start line after an ambitious but doomed attempt to warm up, I was told – along with many others – that we’d be in the second wave, eight minutes later. I know it’s a big race, but there’s not much point having wave system if it operates entirely arbitrarily – it’s not fair on faster runners who want a clear run for a good time, and it’s not fair on the slower runners in front of them who feel like human pins in front of speedy bowling balls.

That gripe aside, it was a lovely closed roads course – along the Embankment to Tower Bridge, back and around St Pauls and finishing back near Westminster. Either I was running somewhat erratically, or the kilometre markers weren’t very evenly spaced, because my watch checking kept veering between “ooo I’m on for a great PB here!” and “absolutely miles out”. As it was, I managed to put on a lung busting sprint in the last 400m or so to clock a PB by two whole seconds (39m 46sec) – before setting another PB at the bag drop for fastest change into multiple warm layers (about 15 seconds dead). Then going home and doing another 12 miles on a different stretch of the river. I certainly saw plenty of the Thames yesterday.

So, any other Winter Runners, or did your weekend see a different race, a parkrun or some solid training? As always, share your stories below the line.

Related posts:
10/01/2018 Fitness Comments Off on Running blog: How was your weekend running?
Diets News