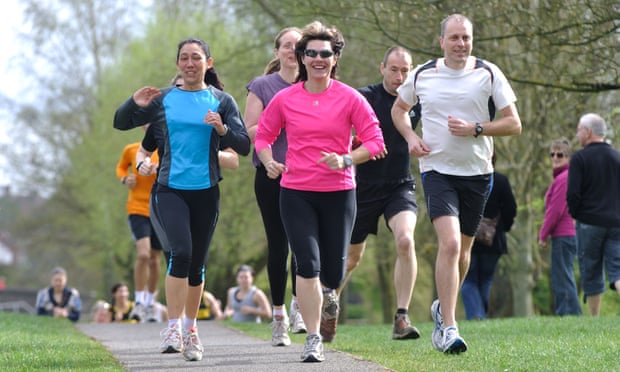 It’s the New York marathon next month, and a lot of people received their numbers this week. I know this because they all posted them on Facebook, thereby marking the beginning of the pre-race season and an upsurge in the intensity of running self-coverage. Whereas customarily, the amateur runner might data-log her every run for friends and followers to enjoy, now we get every run – sorry, training session – plus the feelings that went with it, and what it means in terms of the countdown to the race.

Brace yourselves. There will be photos.

You can see why running inspires such devotion: there’s something mythic about it that transcends other exercise. In his book What I Talk About When I Talk About Running*, Haruki Murakami suggests that the activity is analogous to writing. “Most of what I know about writing I’ve learned through running every day,” he writes, observing that both undertakings require an obsessiveness, endurance and strict adherence to schedule … plus something vague about the nature of existence.

While running might be a bit boring compared to the new exercise crazes being born every week, for people trying to keep fit and reboot their psyche it still offers the cleanest metaphor for getting ahead. What I Talk About When I Talk About Spin Class would be about the depressive aspect of sitting on a stationery bike while pretending it is actually going somewhere. CrossFit is just shorthand for masochism.

Running, on the other hand, is the perfect post-break-up, pre-weight-loss Route To The New You, offering adherents imagery that draws down deep into our collective consciousness: Stallone running up the steps of the Philadelphia Museum of Art (which now features a statue of him doing so) in Rocky; skinny students scarpering on a beach in Chariots of Fire. It’s also a sport for the non-sporty, since it’s not done in a team or in front of mirrors. There is a purity and a romance to running, a rugged self-reliance that counteracts the shouty horrors of gym class culture.

For non-runners, the problem is that talking about running seems to be as large a part of “running” as actually going for a jog. Uploads from friends’ GPS watches, telling me they’ve just bombed up Highgate Hill or done a loop of Central Park, are a daily part of my news intake. Anything involving a race … and welcome to the live-feed from my brain!

Several years ago, I went through this phase myself. I bought the Garmin watch. I thought a lot about layering. I still have a third of a dresser full of shiny black running gear, including a wooly tube you put round your neck for running in the cold. I learned that, when runners want to blow their nose, they press a finger to one nostril and snork on the ground. I even ran the Fifth Avenue Mile and made two people stand by the finish line to watch me. (My dad was one of them and, to his credit, he got there late and missed the whole thing.)

For my birthday that year, a friend somehow got Todd from the Running Mate Couch To 5K programme to send me a message.

Eventually, I stopped running. But I still talk about it which, I suspect, was what the whole exercise was about in the first place.

Related posts:
10/01/2018 Fitness Comments Off on Status update: nobody cares about the run you just went on. Or your marathon | Emma Brockes
Diets News