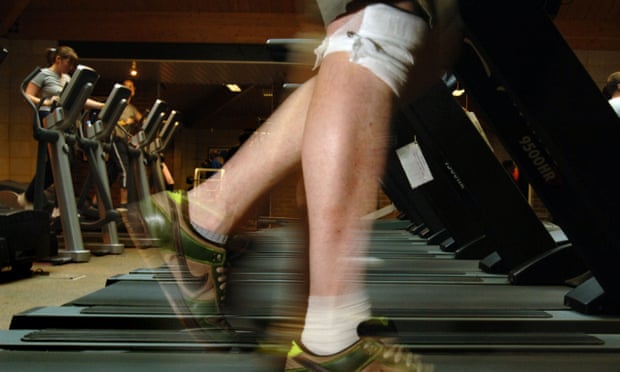 Two hundred metres did it. Not even that. It was a couple days before a big mile race, and we were on the sixth of eight 200-metre reps. Rounding the bend in lane two, I was getting ready to straighten up and push for home, when something snapped. It felt as though someone had got to the back of my leg with a pair of pliers. I faltered, hopped, and tried to get back into some kind of a stride but found I couldn’t. It hurt too much. Out in lane eight, and subject to the inquiring glances of clubmates, I tried desperately to sound cheerful: “Not a biggie – be all right in a mo.”

I maintained just the slightest hope that perhaps I could run this off, and made a desultory attempt at a jog to the finish line, but the truth – and the pain – was swift and conclusive. Something had happened to my hamstring, and my hamstring didn’t want me to run. It wouldn’t be wanting me to run for quite some time, in fact. I was injured.

Nothing about this is all that serious. I’m not a professional athlete. No money will be lost, no career will be damaged, no sponsorship deal will be affected. Nor is the injury terribly bad. It will heal and I will run again and may one day even be a better runner for having had this experience (and many others like it). I do not expect or deserve sympathy. But I do want to talk about what being an injured runner is like, at least for me, and I suspect others.

When you are truly committed, irrespective of ability, running can start to define you. You don’t necessarily mean for it to happen, but as you run more and you get better, and the challenges build up and you continue to meet them, it gives you a lift. Much of the time you spend away from home or at work is based around running. Before you know it, your sense of identity is inextricably linked with your standing as a runner. The regular challenges, the immediate feedback and the real accomplishments that running can provide are all a major boost to your self-esteem. All of which is fine when you’re doing well, but take running away suddenly and you can find yourself feeling adrift.

Unable to go out and run, you are left without the social network that has given you so much support. And there are constant reminders of the things you can’t do. You don’t want to look on Strava, for example, but you can’t help it and the loneliness and the frustration get worse. Running injuries are mostly internal things, and because there are no visible wounds you can’t see the healing process. You never really know how long it will be.

In my own case, it couldn’t have happened at a worse time. It was mid-summer and the races were piling up. The mile race we were training for when the injury happened is one of the highlights of my year, a few days after this there was the last in a league of 10k races and I was in the overall lead. The following Saturday I was planning to run my first fell race, and a few more track races were lined up for the weeks after. It was immediately obvious I wouldn’t be running the mile race, and one by one, as the day of each of the other races approached, I would be forced to admit that I wouldn’t be able to do it.

Missing the mile, and losing the lead of the 10k series, and not doing the fell race that had been in the diary for six months were not what really hurt though. The day after I got injured was my seven-year-old’s sports day. There was a dad’s race; he’d asked me if I’d do it and I’d told him I would. Seven-year-olds don’t think about hamstrings much, nor should they. All he knew was the race was on and his dad was taking part. It was only about 50 metres. All of his friends’ dads were doing it. He’d even gone and won his own race (massively proud moment, that one). How could I let him down?

I couldn’t. What followed might just have been the most painful few moments of my life. Every stride was agony, and to make matters worse the other dads were really going for it. I think I finished fourth in the end, sandwiched between a heavy smoker and an overweight bloke. But the damage to my ego was not quite as bad as the damage to my leg.

“You’re an idiot,” my physio said when I explained why I thought the pain had started to get worse. The net result being a longer layoff. A longer time spent not getting those regular challenges, that steady stream of feedback and support.

I hate to admit it, but when I can’t run myself, there are few experiences less appealing than scrolling down the Strava dashboard handing out endless kudos to friends for races (and 10k leagues) won, and PB’s gained and all the rest of it. But I do it anyway, because it means I’m still involved, and being involved is the best remedy I’ve found for the loneliness of being injured. Staying at home and licking wounds, although a natural response, only deepens the sense of isolation. I did go to support the mile race, despite my disappointment at not being able to run, and was there marshalling at the 10k race the week after. It’s always good to give something back to the running gods by getting involved in ways other than running, and supporting others do what I can’t – albeit temporarily – is undeniably enjoyable. There are plenty of races ahead. I may not be in the them for a while, but that doesn’t have to mean I’m not still part of the team.

Related posts:
10/01/2018 Fitness Comments Off on The loneliness of the injured runner
Diets News