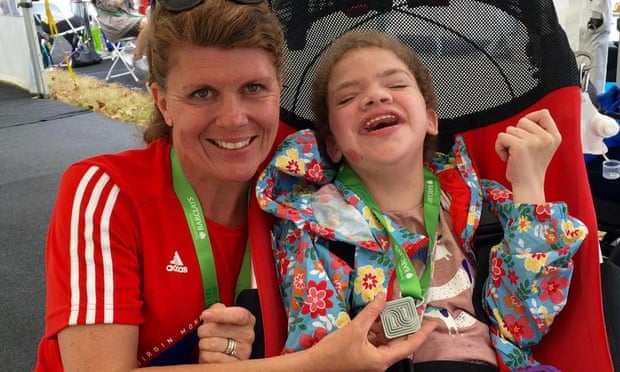 I may not be the fastest runner in town. I’m never going to win any podium places, but for me it’s about so much more than silverware. It’s about keeping fit (obviously) but also about being a role model to my children – and showing that exercise need not be a chore.

Growing up in south Wales I would often go out running with my Dad. Unlike my contemporaries I actually looked forward to school cross country races and today I like nothing better than a long run around Richmond Park in London, hopefully with a few muddy puddles to splash in. I’m trying to show my own children that running and fitness can be fun – but what happens when one of your children is disabled, and running is a physical impossibility?

My youngest daughter, Daisy, is wheelchair dependent, and has complex disabilities which mean that participating in sport, even Paralympic sports, is really difficult. However, I’m not one to give up easily and, thanks to a special-needs jogging buggy that my running club helped to fundraise for, I take Daisy out for laps of our local park. She can feel the breeze on her face as we race around the paths – and she tells me to go faster.

Recently, Daisy got a chance to take part in a race and win her own medal at long last. The first Parallel London festival took place in the Olympic park just a few days before the Rio Paralympics opening ceremony. Billed as the world’s first fully accessible and all-inclusive mass participation push/run event, the vision of its founder, Andrew Douglass, is to encourage more active lifestyles and fitness, regardless of ability. 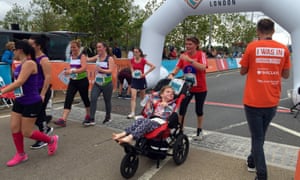 Thousands of people participated in one or more of the five Parallel London challenges – 100m, 1km, 5km, 10km and Super Sensory 1km. Over 40% of the participants had some form of disability and were in turn supported by 500 carers. The races were open to all, regardless of age or ability. Guide Dogs, racing chairs, scooters, walkers – nothing was off limits. We even saw a young woman on roller skates holding the back of her dad’s wheelchair as he raced along the route.

We chose to take part in the 5K race, which took in many of the sights of the Olympic park. Daisy loved it, as always telling me to go faster, high-fiving marshals and waving at the crowds lining the route. The atmosphere was as good as any major race I have participated in: it felt, for want of a better word, like a “proper” race, not just a nod to the disabled. I felt pretty choked up – at last, I was running in a race with my daughter, doing something that many families take for granted, participating in sport together.

Daisy was so happy to receive her own medal, and later that evening she insisted she wanted “more running” although next time her brother could push and I could watch – clearly she needs to go even faster. Parallel London is planned to be an annual event and a national celebration of inclusivity, it could be a game changer for people like my daughter.

Related posts:
09/29/2018 Fitness Comments Off on Parallel London: an inclusive running festival like no other
Diets News