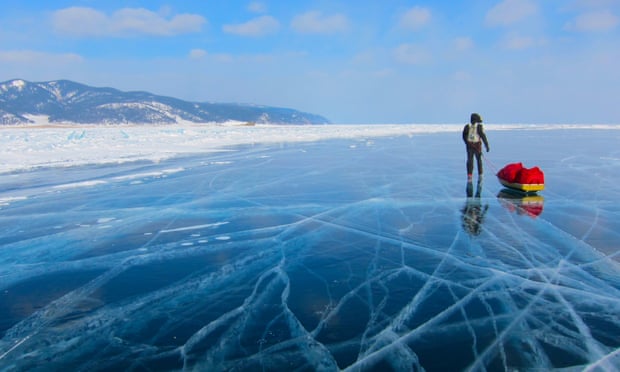 Ray Zahab has run thousands of miles over deserts: the Gobi, Sahara, Atacama, Antarctica and plenty more. Alongside Kevin Vallely, he has also run across the biggest lake in the world, Lake Baikal in Siberia.

Now, I know you’re thinking: “Hold on, can he run on water? What’s going on there?” Well, in the winter months, Lake Baikal completely freezes, solid enough for people to ski, bike, drive and run across. So, in 2010, Zahab and Vallely decided to run the 600km (373 mile)-length of the lake; it took a little over 13 days.

Zahab is a lover of geography. When he discovered ultrarunning back in 2003, winning the Yukon Arctic Ultra in rather chilly conditions, he found a passion that was to shape his life. Now, one of his main aims is to share that passion with other people. He founded the charity Impossible2Possible (I2P), taking young people from a whole range of backgrounds on life-changing expeditions.

One of the reasons I spoke to Zahab was that his Lake Baikal adventure looked so amazing that I was inspired to run the same trip in February 2018, with Neil Bryant and Majell Backhausen. So, chatting to Zahab seemed like a good place to start.

Even seven years later, breathtaking pictures from that expedition keep popping up on Zahab’s social media. Clear ice that stretches as far as the eye can see, mountains on the horizon. But landscape aside, I wanted to know what we could expect.

The biggest difficulty Zahab warned of was the zigzagging lines that must be taken in search of good ground – with deep snow the least favourable and black ice exactly what they wanted. In all, they covered more than 720km to reach their goal – and making their feat even more amazing.

Second, the wind was inconsistent, coming from all directions, but would flip 100lb sleds at least once a day. After running 300km into a headwind and rain while running across Iceland, this sounds almost pleasant to me, but then I thought about the interruption of your rhythm, which is so vital for an ultrarunner to maintain, and how having to deal with the unknown makes things a lot harder in general.

Then there’s the temperatures, which can drop to -40C, but Zahab shrugs this off with: “Well, we’re Canadian – we’re used to the cold.” His attitude seem to be to welcome challenge and adversity generally and trusts that his experience, personality and training will see him through. We spoke about embracing the potential of failure, instead of shying away from it, and his passion to be contagious.

But while the wheels have only just started turning on our project for February 2018, Zahab himself is just a week away from his next big adventure – 1,000km on foot, ski and fat bike across the Canadian Arctic. Along with Stefano Gregoretti, another inspiring adventurer who hosts I2P programs in his native Italy, Ray will celebrate 150 years of Canadian history by showcasing some of the finest parts of Canada.

Related posts:
09/29/2018 Fitness Comments Off on Over the ice … how to run across a Siberian lake
Diets News