A few years ago I travelled to Finland to compete in the Winter Swimming World Championships. It was one of their mildest winters for years but, even so, the water was still -0.7C. Adrenaline got me through the very short race – but afterwards I felt like my hands had been slammed in a car door and that my feet had been pounded by mallets. It was brutal.

For the past 10 years I’ve been swimming outdoors throughout the winter. I’ve swum regularly, sometimes gloriously and sometimes painfully, in water gradually dropping to around 1C or 2C. I swim in the North Sea on New Year’s Day in Scotland, alongside all my family. People ask me why I do it. I think it’s a kind of invigorating, tingling, mad high – and a serious adrenaline rush. I love it. It can be daunting at the same time as being life-affirming.

However there is one thing I have not contemplated, and have absolutely no wish to take part in. It’s something that is gaining popularity among outdoor swimmers and endurance athletes around the world. It’s a cold-water challenge called the “ice mile”.

The basic rules for swimming an ice mile are pretty straightforward. Find a body of water that is below 5C, and swim one mile under supervision wearing only your swimming costume, a pair of goggles and one silicone swimming hat. There is a new organisation, the International Ice Swimming Association (IISA), which is ratifying swims, although not everyone feels the need for officialdom. The IISA encourages swimmers to have an ECG before any ice mile attempt, and to have a medical team on hand for the recovery phase at the end of the swim. It’s a serious, serious endeavour that should not be taken lightly.

I have no desire whatsoever to swim an ice mile. Swimming a few hundred metres in water much below 10C is enough of a challenge to me, and hurts like hell. It does to most regular cold-water swimmers. For every degree below 10C, your feet and hands hurt more, your muscles contract so much it’s hard to make your arms and shoulders stretch out to pull your stroke. Your hands splay as you lose motor function. You can have massive ice-cream headaches. And once you stop generating heat while swimming and are out of the water, the recovery is appalling and you can be cold all day. And that’s all just for a short swim.

An ice mile to me seems punishing in the extreme.

Of course most people I know cannot fathom my long-distance exploits. “You are mad!” they say, or “Isn’t it hideous?” and “How do you manage to swim for so long?”. I rebuff their questions by telling them that it is worth pushing myself to the limit physically and mentally. The irony isn’t lost on me that I, in turn, feel so bewildered and incredulous about ice milers. Who am I to say it’s too punishing?

Colin Hill, who was the technical operations manager for the marathon swimming events at London 2012, and is an accomplished open-water swimmer and English Channel solo swimmer, swam his first official ice mile in February 2013 in Lake Windermere, in England’s Lake District. It took him 24 minutes and 22 seconds. “Even in this short time I felt my hands and feet stop responding,” he tells me. “After 15 minutes my arms were struggling to actually pull through the water properly. At 20 minutes I knew that I could do it, as the shore was close. I really just tried to keep my arms moving, hoping that I wasn’t slowing too much. At this point my extremities were hurting and I knew that the recovery would be long and painful. The swim is one thing, but the recovery after the swim took two hours, while being monitored by a medic.”

It does seem that a lot of ice milers are long-distance swimmers who, having completed the famous long swims, are casting around for something new. An ice mile, after hours of training in coldish water, is a natural progression. Paul Duffield, Canada’s first ice miler, says that the seeds of his ice mile were sown as he was training for a English Channel relay. It was apparent to him that he was better at dealing with the cold than his teammates, and faster at recovering. “The relay team stopped training outdoors in mid-October and I decided to see just how far into the winter I could continue swimming.” He completed Canada’s first ever officially ratified IISA mile in December 2012. The water temperature was recorded as 4.3C. Paul swam 1.08 miles in 36 minutes. “It was intense. Probably the most challenging thing I have ever done but also the most rewarding. It is for sure an extreme test of physical and mental endurance. The physical of course is the cold. A head-crunching, painful cold. But it also takes incredible mental strength to overcome this and complete a mile in water colder the 5C. Nothing short of 100% mental focus will get a swimmer through it.” 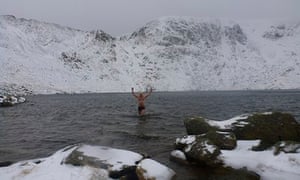 I have to admit to thinking that there is something macho about ice milers. It’s a level of punishment and pain that I can’t fathom and don’t want to experience. But ice milers aren’t just burly men. A surprising number of women are embracing the agony and ecstasy of ice miles as well.

Elaine Hawley, an ocean lifeguard and writer, completed her ice mile in Boston Harbour in December 2012, on a wet, raw day with no sun and drizzly mist. “In the week leading up to the swim, I was in a panic. I remember well, two days before the swim, coming home from work at lunchtime so I could crawl into bed and have a good cry. I was fairly certain I was going to die out there while trying this silliness, and I was terrified.” But she felt that she couldn’t back out after telling everyone that she would do it and going to all that effort to train and coordinating the logistics. “It took a lot to get to that final moment of deep self-doubt, and I think it was good for me to be there and be honest with myself about how dangerous what I was about to do could be. I think that meant my adrenaline was really high during the attempt, which shielded me from feeling much during the swim.” She reflects: “Looking back, it was scary and exhilarating and empowering all at once. I looked fear right in the face and said, ‘Catch me if you can.’ I was surprised by how well I did and how quickly it was over.”

Many people who swim a few hundred metres in cold water in winter are now contemplating ice miles. But the majority of the ice milers who I’ve spoken to who have completed the challenge are worried that swimmers should realise the extreme difference between dabbling in winter swimming and training for and completing an ice mile. “You have to be realistic – it is not for everyone,” says Annette Stewart, a grandma-to-be in her 50s from the south coast of England. “You cannot do it without training. I did not realise it could be such an extreme threat to my health and sanity until after my swim. But I think this is part of the mindset before the event – you have to think yourself invincible.”

Annette has swum a solo English Channel alongside other countless long and hard swims but maintains the ice mile is something else. “An ice mile is short compared to a channel swim but I discovered, although concentrated, it was very intense and stretched me mentally and physically more than any other swim.” After finishing her ice mile in February 2013, in 4.6C water, Annette’s recovery was hard. “I stood up and started to walk from the water and was then carried to the recovery room by two divers. Here I was stripped of my clothing, dressed and questioned. I remember it all, what I was asked and my response but I have no memory of vision. I remember having never felt as cold as I did that day.”

For some people, an ice mile is a one-off challenge. John Donald is a breed apart, though, and has done much to publicise ice mile swimming in London. Last year he racked up over 20 (unofficial) ice miles over the winter in Parliament Hill lido, an unheated pool in north London. You would think that after so many ice miles that he would be casual and sanguine about swimming each one – that it would seem an everyday affair to someone like him. But he confesses that he still finds each ice mile an internal battle.

“On the way to a swim I am filled with dread and almost nothing but sheer determination (and having told someone else I’m going to do it) can get me to do it,” he says. “When you get in you may have brain freeze. You push on. After a minute, it passes. For few minutes the shock is very bad and you can hardly catch a breath. You concentrate on breathing out and relaxing. Panic grips the mind. This comes and goes throughout the whole swim. Your toes go numb, then your fingers, then feet, hands.

“After eight to 10 minutes, the pain stops and you start to feel good. Soon feeling good is replaced by elation – you start to feel invincible. You feel numbness traveling up your legs and down your arms. sometimes your neck gets really cold and this is, of course, a worry. As the blood starts to be pulled from your head to your core, you can sometimes feel your consciousness dulling down. Sometimes you don’t notice. There is a ticking time bomb as your core temperature drops and your body wants to stop moving. You know that your time is limited and you wonder where the limit actually lies.”

Having heard this I am even less inclined to try my own ice mile, and even more inclined to think: why? Why are so many people trying to do an ice mile? It can’t just be because there are more open-water swimmers around.

Elaine Hawley says, “I think it falls in line with the same cultural zeitgeist as things like Tough Mudder, the rise of CrossFit, and the booming popularity of triathlon. It does seem that, here in the US at least, being invincible and tough has become perhaps the most important characteristic a person – and especially an athlete – can have. Popularity brings people, and I think we’re going to see a continued rapid increase in ice milers and interest in the sport as a new outlet for this tough-guy syndrome.”

To Paul Duffield, ice miles are a great leveller. “There is a place in the sport for all types of swimmer. You don’t have to have the Olympic physique or be a particularly quick swimmer to take part. IISA swimmers range in age from late teens to late 60s and come from all walks of life. As the water temperatures dropped last winter I found myself thinking, ‘I may have finally found the sport that my body type is built for.’ I was never a sportsperson as I grew up but feel that I have found a niche in the ice swimming world.”

Related posts:
09/29/2018 Fitness Comments Off on Meet the ice mile: the toughest swimming test on the planet
Diets News