I have only swum in open water a few times, and always in calm reservoirs or gentle lakes, so I wasn’t quite prepared for how imposing and rough Lake Windermere appeared on a cold grey day. But I, along with 10,000 others, braved the lake to complete the challenge of the Great North Swim, an experience I am already keen to repeat.

The Great North Swim, and open-water swimming in general, is seeing a surge in popularity. The event started in 2008 with 3,000 participants, and now 10,000 take the plunge, going from their local pools to the breathtaking setting of Lake Windermere. It’s part of a series of five swims throughout the country, with 20,000 people swapping lanes and chlorine for the great outdoors. 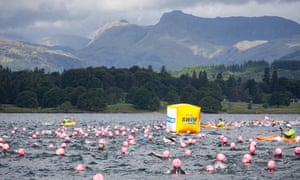 Simon Griffiths of H2Open magazine says he has noticed an increased interest in the sport in the last few years. He believes that becoming an Olympic event helped raise its profile, while the growth in triathlon means stand-alone swimming events are often run alongside triathlons. There are now about 200 swim events each year in the UK.

I arrive on a train packed with people descending on Windermere, and the hotel is buzzing with talk about what distances they are doing, and swapping techniques and advice. I head straight to the lake just as the 5km race is finishing, the longest distance over the weekend. David Hastie, who has just completed this race, tells me the water feels colder than the 15.6C it’s been measured at. “It’s much nicer than swimming in a pool,” he says. “You just have to focus. It’s very choppy though.”

Choppy seems to be the description most people repeat as they emerge from the water. Even Christine Jennings, who won the Women’s Elite race in 19:05, uses that word. But if 10,000 other people aren’t daunted, I won’t be either.

My training has involved a few sessions in a local reservoir, but has mainly been in a pool where sighting is fairly straightforward. It’s very different in a choppy lake. My new Huub wetsuit only arrived two days before the swim so I popped to my local lido to give it a quick tryout. I managed to do the mile there in 29:30 – but how would I fare in open water? 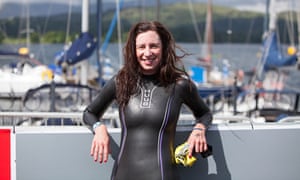 Most of the people taking part are doing the one-mile race, of which there are 26 waves over the weekend. There seems to be a mix of open-water enthusiasts alongside complete novices – which is precisely the aim of the swims, to get as many people as possible completing their own challenge. The oldest woman competing is 77, taking part in the two-mile race alongside a man who last year swam in every mile swim wave.

I have opted for the mile in the third wave of the day, which gives me time to watch the impressive performance from the elites and the start of the masses. Former Olympic butterfly swimmer Stephen Parry emerges from his mile event, completing it in 22:29, and I ask his advice for my race. He tells me: “You’ll be fine, it’s all about sighting and staying calm.” Easy for him to say.

There are just over 200 people in my wave. We are all taken through an acclimatisation area, a paddling pool-sized part of the lake where we plunge in to feel how cold the water is. Not too bad is the verdict! Iwan Thomas, the Great Swim ambassador and sprinter turned open-water swimmer, is going to start our race before taking part in the next wave. He tells us all to relax and enjoy it, though he seems more nervous than the rest of us.

We take off with a flurry of splashes and head out towards the middle of the lake. We were warned that the first 100m would be really choppy, but that it would feel much calmer after that. Somewhere near the 750m mark I’m still waiting for the calm, and at times it felt more like swimming in the sea than a lake.

I feel battered by the water. I try to focus on my breathing and technique, and just keep going. Somewhere near the 400m-to-go mark my lower right leg cramps painfully. I recall overhearing people in the bar the night before talking about how they keep swimming through cramp, so I try. It doesn’t work, so now instead of just my lower calf cramping the entire leg goes into spasm. I don’t want to stop, so flex my foot and just kick with the left leg: fine until a friendly steward in a kayak points out that I’ve drifted off course. However, I can now see the finishing post so just concentrate on getting there – still one-legged.

My finishing time is 38:23 but that doesn’t seem to matter – the atmosphere is fantastic and everyone feels a sense of achievement, whatever their time. Ten thousand people can’t be wrong. I’m hooked, and want to give it another go. I’ve already signed up for the Great Swim in London.

Related posts:
09/29/2018 Fitness Comments Off on How I got hooked on open-water swimming
Diets News