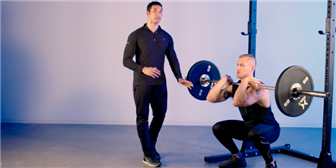 The front squat is a core training staple that can build size and strength in your lower body—but are you sure you’re even doing the exercise correctly?

For this basic gym necessity, you shouldn’t settle for anything other than perfect form—especially because it’s such a simple, essential movement that should serve as one of the centerpieces of your training plan. Let Men’s Health fitness director Ebenezer Samuel, C.S.C.S. and associate fitness editor Brett Williams guide you through the move’s subtleties, saving you from the bad habits that are keeping you from unlocking your fitness potential.

Before you shoulder up to your barbell and drop down as low as you can go, take note that it’s extremely important to pay attention to the subtleties of the movement here, particularly if you’re more accustomed to the back squat position. The front-facing grips you’ll use can be tricky at first, and the position of the load is harder on your core than you might think—so be ready to start light until you’ve got the form down.

Get A Grip… or Two

Eb says: Depending who you train around, you’ll hear a lot about how one grip is “better” or “safer” for you than the other. Don’t buy any of it. Find and use a grip that works for you. The front squat is a total body move, but to get the most out of it, you need to be comfortable with how you’re holding the bar.

If you’re over-focused on your upper-body positioning because you’re trying somebody else’s grip, you’ll bounce at the bottom or speed up your reps more than is normal. Work to be proficient with both grips, because you never know when you might need one. You’re always an injured wrist away from having to use the bodybuilder grip for a few weeks.

Get Comfortable With Being Uncomfortable

Eb says: The bar is going to get close to your neck—and it should, because that’s when it’ll be on the meaty part of your shoulders. If it’s too far in front of you, it’ll feel less dangerous but it’ll also place more stress on your anterior delts, stress that those small muscles aren’t meant to handle. It’ll also be harder to sit back.

The only thing preventing the bar from hitting your neck should be your fingers. That’s also why it’s critical to keep them wrapped around the bar at all times, no matter the grip you’re using.

Keep Your Back Muscles Live

Eb says: All of them. You want some tension in your upper mid-back; that’s important because it’ll help keep your shoulders in a safe position. You want to keep some tightness in that joint, so the barbell sits on the meat of your shoulder muscles, not on bone. That mid-back tension is also going to help keep you from rounding forward when you’re at the bottom of the squat, a common flaw (and a reason to drop the barbell).

Work to keep your lower back extensors firing as well; this will help prevent you from rounding in the lower back, which can lead to back issues in the future, or force you to drop the rep.

Eb says: Throughout the front squat, battle to keep your chest and shoulders up. If either starts to drop, then you’re cruising to lose the rep. Be intentional about keeping these body parts high and think about it; especially when you train heavy, they’ll start to drop by default.

When that happens, squeeze your midback and lower back muscles harder, because those are the muscles that fail and lead your torso to collapse. Think about mentally checking in with your body at three points on every rep: At the very top, at the very bottom, and as you begin to power up from the hole.

Related posts:
05/02/2019 Fitness Comments Off on How to Master the Front Squat
Diets News