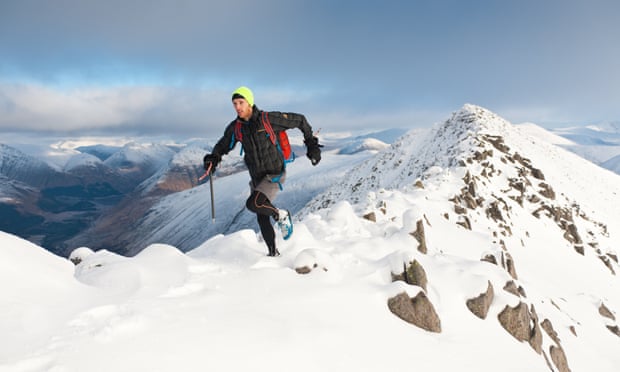 Hello! What crazy adventure have you been on recently? At the end of January, I was running in Outer Mongolia, in the Genghis Khan marathon. At -32C, it was even colder than my native Aberdeen. We had what may have been the world’s coldest Burns supper out there. Now I’m back working at the Scottish Running Clinic (University of Edinburgh), for the SportScotland Institute of Sport and golf’s European Tour.

What’s next? For 2017, I’ll be doing most of my running in the UK, which is great – I love the hills – and will also do the Ryder Cup run with a friend. We’ll start at the home of the European Tour in England and jog over to Paris where the next Ryder Cup is being played. We’ll play some golf each day also – some speedgolf, wild golf as well as the more conventional 18 holes. I love running and golf for different reasons – but both are great for health, so we’re keen to promote that.

Where’s your favourite place to run? The Isle of Skye in Scotland. Absolutely epic with the mountains all around you and plenty nice ridges to get up on to. Even the bus/drive there is beautiful. Although in the summer, the midgies are the size of golf balls.

Do you remember your first race as a school kid? I came third in my school cross-country race. It wasn’t really cross-country but a load of laps of the playground. That qualified me for the school team, but we arrived for the Scottish championships a week late – our teacher had misread the information sheet.

When people ask you for a training tip, what do you tell them? Start slowly and build up. This will help avoid injury and get the race finisher’s medal you deserve. Then enter a race you really want to do – I think a focus is really helpful and gets you out the door when it’s raining. Eat decently and sleep at least seven hours. Training is much easier if you’ve had a decent sleep.

Do you ever struggle with motivation? Every runner will struggle with motivation at some point. With most races, I’ll try and break them into smaller chunks. Getting to the next checkpoint is a lot less daunting than thinking of the whole race distance. I always leave my alarm clock on the other side of the room, so I have to get out of bed to shut it up.

Do you listen to music when you run? Mostly not. Most of the time I’m happy looking around or chatting to friends when I’m running. Sometimes, if I’m training for something long and have to do a 50 miler along a canal or similar, I’ll put some music on to distract myself. Although, the last time, I borrowed my brother’s iPod and he had all sorts of rubbish on there.

Do you like a running gadget? My shoes. Currently, it’s usually Merrell All-Out Crush. My feet are the tools of the trade so I need to look after them. I’m not really a man for gadgets. I think training hard (and smart), eating right and sleeping well are far more important than fancy watches and the like. The Kenyans tend to do fine without them. I think we’re a bit over-reliant on them in the western world. I will usually take my phone to take some pictures if I’m up in the hills along with decent clothing, map and compass, etc.

What’s the worst thing about running? Having to clean rank socks and shoes from a day in the hills. Terrible.

What’s the best thing? Seeing stuff. I’m convinced that you see and even smell and hear far more running than in a car or even cycling. It’s a great way of seeing things in the local area and further afield. Also getting regular exercise keeps me happy. I’ve had a couple spells out with injuries and it’s no fun at all.

What’s your post-race indulgence? I’ll tend to go all scientific and have some protein (to repair muscles) and carbohydrate (to replace the fuel I’ve used). This might be a chicken sandwich or a baked potato with tuna. But my indulgence is custard and bananas – both myself and my two-year-old daughter love custard and bananas!

What do you eat before your big runs or a big race? It depends – for a race I’ll eat about 100g of carbs two hours prior – maybe a couple of bananas or a sandwich. I’ll have carbo-loaded the night before so just a small top up. If it’s a longer challenge of, say, 100 miles, I’ll eat something more substantial.

Have you ever run barefoot? I grew up in Kenya, so used to run around barefoot to play football and the like. But actually as soon as Kenyans run in competition, pretty much everyone wears shoes. Lighter shoes offer performance advantage, but no shoes is harder to race with. When I came back to Scotland aged eight, wearing shoes all the time didn’t come naturally, but was definitely needed for the snow.

Who would you choose to watch, Mo or Usain? There is something compelling about both of these legends. Usain Bolt for the theatre; Mo Farah for the utter determination and hard work he has put into being the best in his business.

Who is your favourite runner? Kílian Jornet is pretty exceptional – this guy thinks it’s normal to run up the Matterhorn. He is the king of ultra-long distance running. Kenenisa Bekele is one guy that many of the really fast runners admire. His engine is so big, it’s scary to think what he would have done had he stayed fully fit throughout his career. But, if push comes to shove: my wife, Jennie. She was running marathons before me and finds a way to smile at the finish – which is important I think (especially for the photos).

Andrew has run from John O’Groats to the Sahara desert (4,300km); a record seven ultras on seven different continents in under a week; and completed the first run across the Namib desert. He is a sports-and-exercise-medicine doctor with the University of Edinburgh, and a Merrell brand ambassador. Follow him on Twitter @docandrewmurray or at www.docandrewmurray.com.