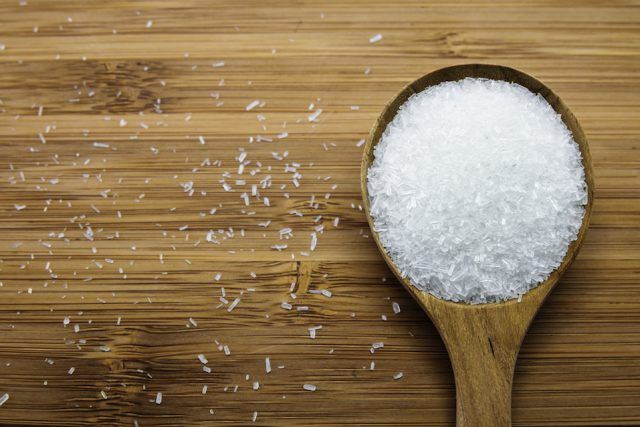 A diet high in sodium is a major contributing factor to high blood pressure. But it’s hard to know exactly what too much sodium looks like. Sodium, an electrolyte that is necessary for the body to properly function, is found in nearly every food, and it primarily comes from salt. And while we need it to survive, we only need a very small amount — an amount that Americans surpass in their own diets every day. Too much of a good thing can become a bad thing; eating too much salt can be detrimental to your body. Here’s what it does to you and what “the right amount” of salt in your diet might look like.

Do you eat too much salt? | topthailand/Getty Images

How does sodium cause high blood pressure?

One of your body’s many jobs is to remove water from the blood cells, which the kidneys do. When you eat too much salt, it affects this process, which causes the body to retain water. This puts extra strain on the blood cells traveling through the body and increases blood pressure. Higher blood pressure means added strain on your arteries. As a result, the muscles in the artery become stronger and thicker to put up with the more intense pressure. When the artery walls become thicker, the passageway for blood cells to travel becomes more narrow. Over time, this causes arteries to become clogged, which leads to severe heart complications such as a heart attack.

What does the right amount of sodium look like in a typical diet?

According to the American Heart Association (AHA), the average American only needs about 500 milligrams of sodium in their diet daily. However, the U.S. has a sodium problem, and most Americans are consuming around 3,400 milligrams daily — nearly seven times the recommended amount. The AHA suggests that your diet include no more than 1,500 milligrams each day to keep your heart healthy.

Your daily meal consumption probably breaks down to something like this: Breakfast, snack, lunch, snack, dinner, snack. (Let’s be honest, you probably sneak a quick late night snack after dinner.) With that said, your sodium intake should be about 400 milligrams per meal and about 100 milligrams per snack to hit that healthy 1,500 milligram maximum.

To stick to a 400-milligram breakfast, try topping a piece of whole wheat toast with avocado, egg, a tablespoon of cheese, and a dash of hot sauce. Eggs are generally low in sodium, so they’re a good base for a healthy breakfast. For lunch, a grilled chicken sandwich on whole wheat bread or a salad is a good choice. But make sure you check the sodium content in the salad dressing, since the dressing often hides some pretty unwanted nutrition facts. Watch the added salt at dinner. If you plan on whipping up pasta with jarred sauce, make sure to buy low-sodium sauce — one serving of regular jarred sauce usually has more than 400 milligrams of sodium.

Double check the sodium content of the ingredients you cook with. Cheese, smoked meats, frozen seafood, and sauces are often loaded with sodium.

Are there easy ways to cut down on sodium intake?

If you think you consume too much sodium, there are easy ways to cut back. Start by going through a typical day and recording the actual amount of sodium you normally consume. (It may be much higher than you realized, which is the case for most people.) Then, work through your day’s meals and pick out items you can eliminate to lower the sodium count. Try skipping the hot sauce on your eggs in the morning and swap the white bread for whole wheat bread at lunch. Opt for sauces that are low in sodium rather than snacking on salty chips and salsa in between meals. When you pick out ingredients that are easy to eliminate, you make positive changes without switching up your entire diet.

Related posts:
10/18/2018 Diet & Food Comments Off on Too Much Sodium Leads to High Blood Pressure – But What Does ‘The Right Amount' Look Like? – The Cheat Sheet
Diets News