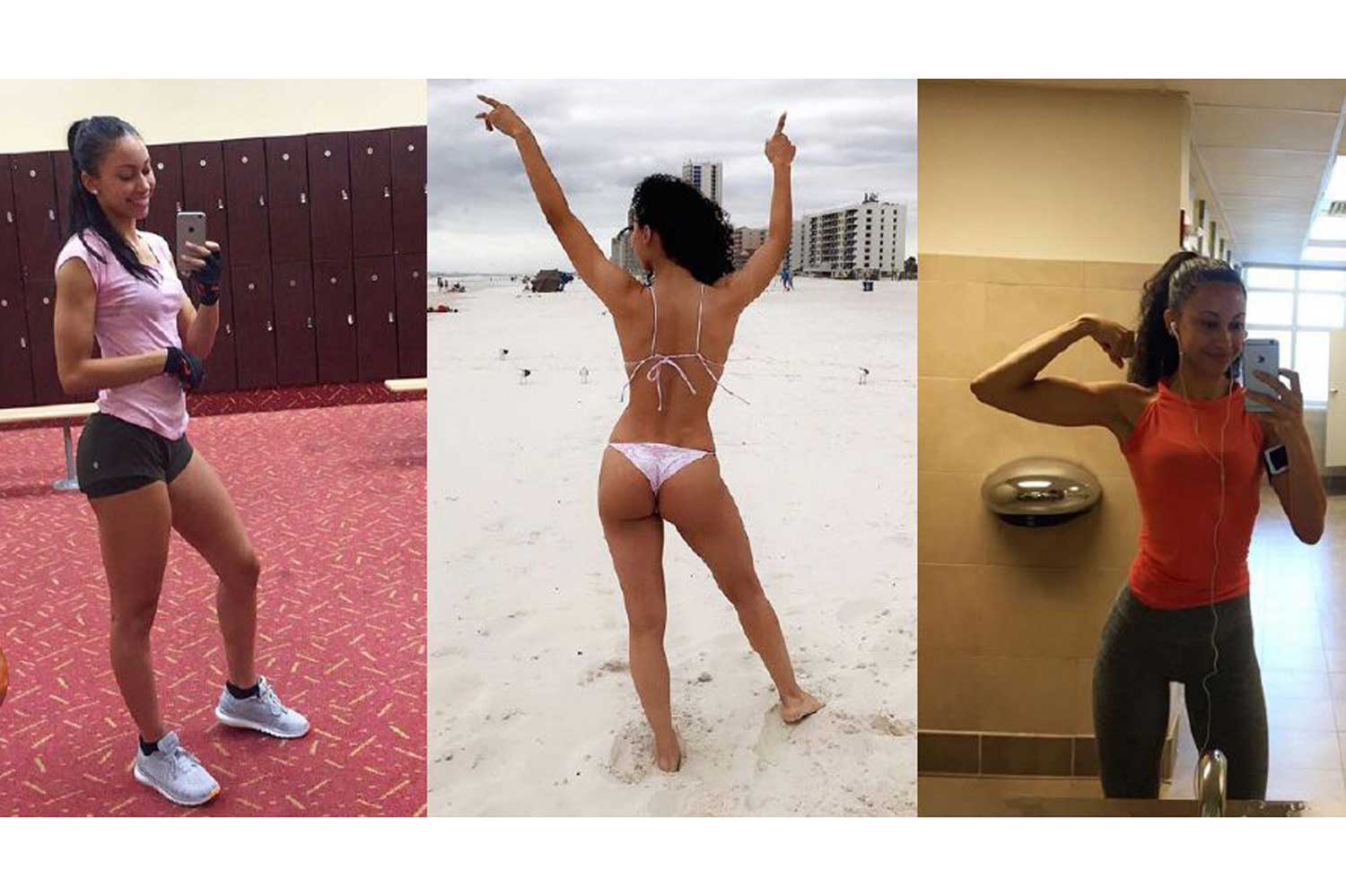 I started to hate my body in middle school. I’d never really focused on how small I was until a boy I liked in the sixth grade told me I was too skinny. From that point on, I was hugely insecure about my thin body.

High school was the worst. I played basketball, and in addition to practice and games, my dad built a court in my backyard and a trainer would come over and we’d do tons of cardio and drills. I wanted to quit the sport so bad so I could gain weight. I had no boobs, no booty, and at 175cm, I felt like I looked like a walking stick.

I wanted to gain weight so bad to look like a “real woman” and to be attractive to other people. Anything I could manipulate to make myself look bigger, I did. I would wear thick leggings—sometimes three pairs—underneath my pants, jeans, or shorts. That continued into college.

I quit basketball going into college, but I developed a really weird mindset that made me afraid to do any sort of physical activity that I thought would make me lose weight. I hated even walking to class because I knew I was burning calories. I thought stopping exercise would help me put on weight and I’d finally feel confident with myself, but in reality, it made me terribly out of shape.

Around that time, I also developed irritable bowel syndrome, which came on suddenly, and led me to lose about 4.5kg, bringing my weight down to 54kg. I could hardly digest anything, and I cycled through weight gain, flare ups, and weight loss throughout college.

After four years of struggling with IBS, I finally found a doctor who recommended fibre and probiotics, and I realized I was allergic to gluten. As soon as I started this regimen, it was as if I was completely normal again. And with my IBS under control, I turned my focus back to gaining weight.

Since my athletic career had been almost entirely cardio, I had no idea what to do in the gym. One of the first times I went in, I wanted to work out but was completely lost, so I ended up doing a bunch of yoga poses (though I had never done a yoga class) near the dumbbells, and I was in everyone’s way. It was so, so embarrassing and it made me never want to step foot in a gym again.

Around this time, booty-building challenges were becoming super-popular on social media. So I started following more people on Instagram and researching butt exercises like glute bridges and hip thrusts.

I was instantly intrigued, but still totally intimidated to go back into the gym, so I started doing bodyweight versions on the floor of my apartment instead.

For a few months, I worked out at home doing only hip thrusts and glute bridges. While that doesn’t sound like much, I started to notice changes in the shape of my butt. I took before and after pictures, and after three months, realized if it was perkier and bigger just from doing bodyweight exercises, some real gains could come with adding weight.

I started going to my apartment gym which was teeny, but had dumbbells, and most importantly, no one was ever there. I focused on glute bridges and increased my weight every week, starting with 15 pounds and working my way up to 35 pounds.

I was seeing progress—and this was really the moment my self-esteem started to rise. I wanted more, which meant trying barbells, so after two months, I accepted that I needed to overcome my fears and go to a bigger gym.

It wasn’t nearly as intimidating as I thought. Having access to heavier weights helped me see even more results in my booty, which helped me gain confidence. I did more and more research, and started incorporating more exercises with heavier weights. I tried out machines, and I watched my legs (finally!) get bigger.

Had a good booty/leg workout today. Currently walking like a new born giraffe, while being a boob in the bed and eating everything in the fridge ? #fitfam#fitgirl#instafit#instagood

The more muscle I gained, the more I started being driven by more than just aesthetics. I was tired of feeling weak and having people underestimate my strength.

I still struggled with low self-esteem, so I practised telling myself that even when I had setbacks (namely due to my IBS), I would be kind to myself, get through it, and then pick myself right back up.

Eventually, it worked. Instead of crying and sulking in bed and telling myself how ugly I was because I couldn’t digest food and keep any weight on, I grew to have confidence that my body would come back around.

When I hit 150 pounds on the squat rack without a spotter or a belt, that’s when my mindset really shifted. It wasn’t just about gaining a booty; it was about gaining strength.

With working out, my goal is to be strong both mentally and physically. I still use mostly heavy weights to keep gaining muscle. On lower body days, I do squats, lunges, hip thrusts, and glute isolation work, increasing my weight each week.

I split upper body into back and biceps one day, chest and triceps another day, but it’s really my back that I like working most here, mainly because I’m trying to get better at chin ups. I did my first unassisted chin up last month, and I was shocked I could do it! Upper body is newer to me so I have more to learn, but staying consistent and constantly pushing myself is definitely the key to success here.

Yesterday was supposed to be leg day but ya girl wanted to be a boob in bed instead ??‍♀️ today I attempted 4 sets of 10 with 130 pounds. First time doing 130 and honestly I might have been able to do 135 but I'm super into taking things slow, making sure I listen to my body so that I don't hurt myself. Recording myself has really helped me b/c I never think im doing squats correctly. But practice makes perfect ??‍♀️

When you’re trying to gain a booty, carbs are your friend so I don’t really “diet.” And because of my IBS, I tend to stick to foods that my body likes and digests well, so my meals are very similar most days. Gluten, dairy, and soda are three things that my digestion does not like at all, so I try to stay far away from those.

Luckily, as time goes on, there are so many more gluten-free and dairy-free options, so I can have things I love like ice cream. And I do try and meet a goal to eat a different veggie and try out a new nutritious recipe each week.

Since I started doing glute bridges on my floor in February 2016, I’ve gone from 120 pounds to 142 pounds. My glutes went from 35 to 39 inches. The best feeling was when I could no longer fit in anything in my closet. I had always been a size 0 to 2 in pants and now I can barely fit a 0 over my knees.

I used to be so afraid of how people were going to look at me in the gym, and now I’m now able to hit the squat rack, put tons of weight on it, and feel like a badass.

I used to be so insecure about being skinny that I would wear leggings under my pants on hot summer days. Now, I can wear anything and not have any ounce of hate towards my body. That’s the confidence I’ve been searching for since I was in seventh grade.

Believe in yourself as hard as you can. Once you do, any setbacks become irrelevant because you know you can get right back on track. It may take a couple weeks, months, or years, but as long as you’re putting effort into reaching whatever goal you have, you’ll hit it eventually.

This article was originally published by Women’s Health.