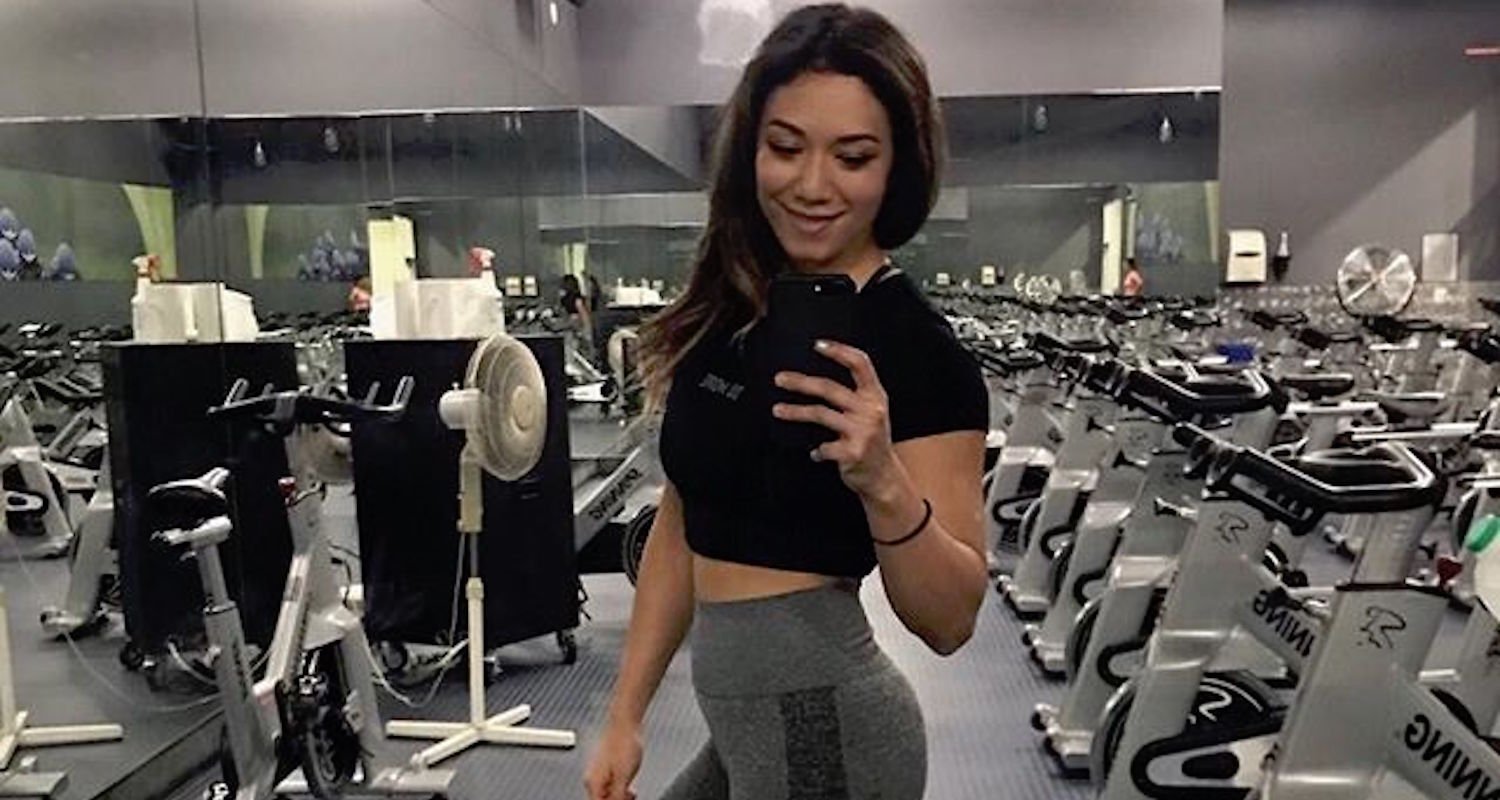 A female fitness star has told of her struggle with extreme bloating by sharing shock pictures on her Instagram page.

Michelle Middleton, from Portland, US, posted to her 102,000 followers to explain what happens to her body when she eats certain foods.

Michelle transformed her body in 2015 by embracing weight lifting six times a week and by following a balanced diet.

But in spite of this, she – like many women – suffers from bloating.

Don’t see failure as the end but as the beginning ⚡️. If I had given up every time I messed up I wouldn’t have gotten as far as I have today. I messed up on the daily and I STILL mess up now ?. But success is the sum of small efforts repeated day in and day out. Keep making an effort to stay active. Keep trying to improve your diet. Yes, mistakes are bound to happen but that’s when you brush it off and get back on it ??. And remember that establishing good habits that you can maintain as a lifestyle will lead you to lasting results ❤️. ——————————————————————————— @wrkethicsupps code “madly” @paragonfitwear code “michelle”

She accompanied her before and after photos with a post to explain it’s something that happens to her often.

“I do these bloat posts every now and then but people still get surprised at how big my belly gets.”

When I say I’m bloated… I’m bloated ?. I do these bloat posts every now and then but people still get surprised at how big my belly gets. Yes I get bloated and it happens when I eat certain foods. I pretty much know which foods are going to do it (high FODMAP) but sometimes I will eat it anyways ?. Like earlier I had Greek yogurt and I got bloated within a few minutes but the bloat only lasted for a few hours and now I’m back to normal ?. The foods that make me the most bloated are yogurts, protein powders, apples, pears, watermelon, broccoli, cauliflower and asparagus.

“Yes I get bloated and it happens when I eat certain foods. I pretty much know which foods are going to do it (high FODMAP) but sometimes I will eat it anyways.”

“Like earlier I had Greek yogurt and I got bloated within a few minutes but the bloat only lasted for a few hours and now I’m back to normal.”

“The foods that make me the most bloated are yogurts, protein powders, apples, pears, watermelon, broccoli, cauliflower and asparagus,” Michelle told her fans.

My fourth pic better be swole ?. The first pic was after completing @kayla_itsines 12 week BBG and help guide. I thought after following her guide I would have one of those crazy transformations …but nope. Looking back I was overeating (even though I thought I wasn’t) and I also wasn’t weightlifting which has been a huge game changer for my body. After a year of sticking to her program I wanted something a little more challenging and started to get into weightlifting and eventually powerlifting. After lifting seriously for a few months, I decided to do my first figure competition. I was going to the gym consistently so why not? Well it was the hardest thing I’ve ever done. So many hours a day in the gym and that was the easy part ?. Dieting was HELL but I did it and was the smallest id ever been in my entire life. But seeing myself at that weight, I’m wayyy too skinny for my category sooo now it’s time to bulk up and put on some muscle ??. I had a hard time mentally gaining all that weight back but I FEEL great and my body looks different at this weight than last time. The first pic and last pic I’m 140lbs and the middle pic I’m around 120lbs. #cheerstoimprovement #happytransformationtuesday

In a follow-up post, Michelle revealed that she is still learning about her body and was keen to share both the good and bad with her followers.

“If you’re someone who gets bloated and discouraged in your fitness journey because of it… don’t,” Michelle advised.

“It’s a minor set back at times but you can achieve a flatter stomach.”

I got messages today of girls discouraged because they can’t follow their plan perfectly. Do I follow mine 100% ? No, I mess up all the time ?. It’s not about perfection but consistency. Me not giving up and continuously moving forward is what got me to where I am now. It takes hard work but it doesn’t have to be torture. I enjoy the training that I do. I like the foods that I eat. You need to find a plan that you can follow and that works for YOU. And remember that there are going to be ups and downs so don’t give up ??. ——————————————————— @wrkethicsupps code “madly” @paragonfitwear code “madlymish

She went on to list the things you can do to help.

“Go to doctor and see if they can figure out what’s causing it,” Michelle advised, explaining that it was also important to get an allergy test done.

And this is why we bulk ?. Looking back and seeing how far I’ve come in such a short amount of time motivates me to keep working harder and sticking to this bulk. 9 month difference between these two photos. In my before pic I didn’t train as hard or as heavy as I do now. I mostly did plyometrics and lighter lifting. A month after, I got introduced to a new way of training and started doing more compound movements, pushing myself to lift heavier each week, less rest time, supersets, dropsets and essentially pushing myself really hard in the gym. I got up to 150lbs and then did a bodybuilding show where I leaned out and could actually see what muscle I had underneath. I know I might complain about feeling a little thicker every now and then but I’m actually happy that I can eat lots of food. I’m just pretty upfront about how I’m feeling and some days I feel chunky and some days a feel great ??‍♀️#imcrazyiknow. So now the process starts again and it’s time to make some gainz to bring a better package to stage next year ??.

She also said that some people recommended taking probiotics.

“Be mindful of what you’re eating,” Michelle added.

“If you notice you’re bloated be aware of what you just ate. If it happens again, see if you ate something that bloated you last time. Keep a mental note till you narrow down the culprit.”

Related posts:
07/06/2018 Diet & Food Comments Off on Woman’s Shocking Pictures Reveal What Eating Yoghurt Does To Her Body
Diets News