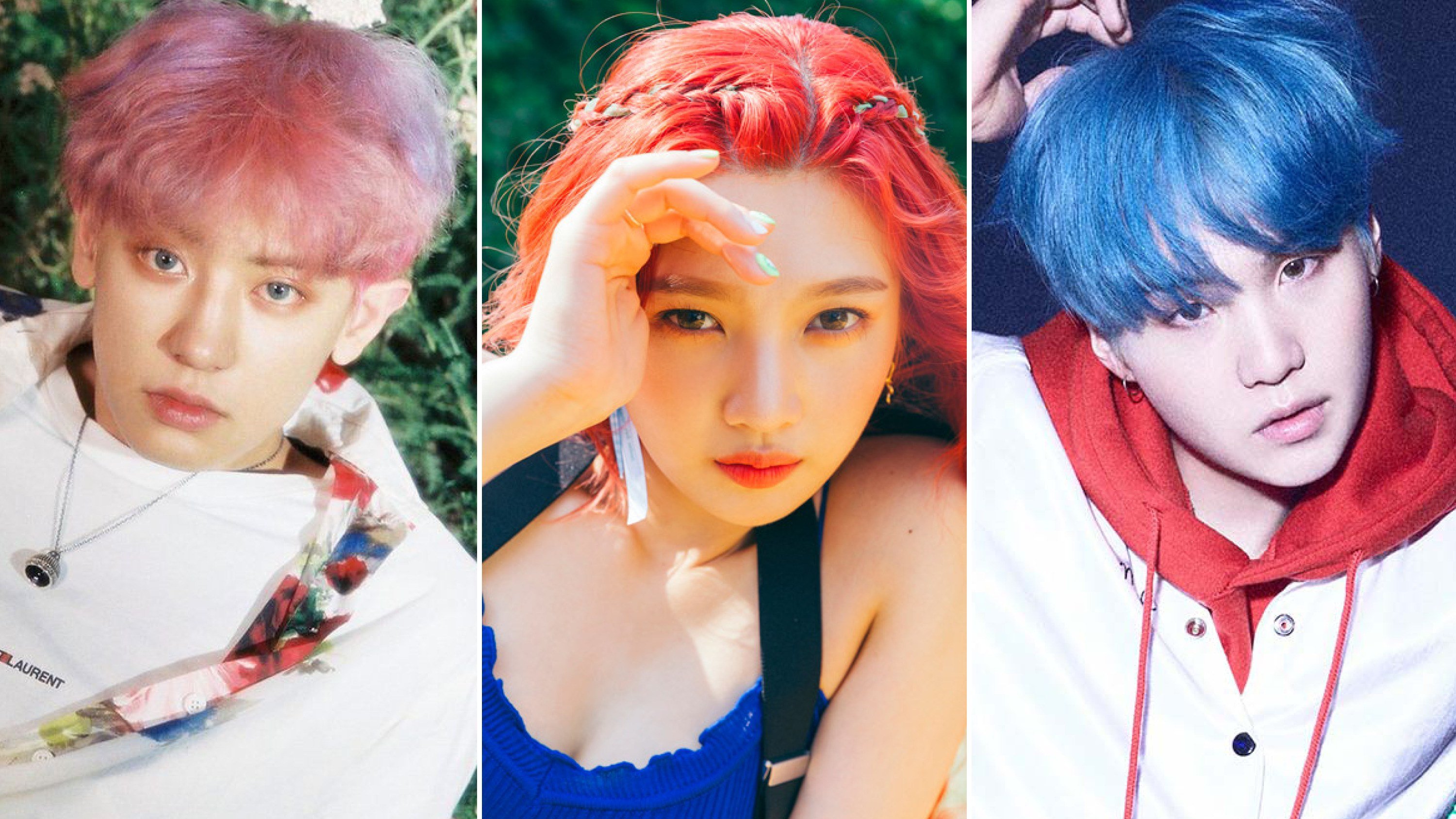 Of the many job requirements for being a pop star in South Korea, "must be open to constantly coloring your hair" should be listed alongside proficiency in dancing, rapping, singing, and being generally attractive. Frequent trips to the salon are just another strenuous part of the idol lifestyle. Over the years, rainbow dye jobs have started to hold significance to the career trajectory of K-pop stars. A new hair color is a signal to fans that something big is brewing, namely, a new single or album is on the way.

For Korean pop stars, all they have to do is take off their beanie at the airport and expose their newly colored hair to rally the troops. "Korea sees the single, album, music video, and the first live performance all typically revealed in 24 hours," Benjamin explains. "So, unveiling a new look heightens that impact."

Members of EXO or Twice are the truest testaments to this phenomenon: When Baekhyun showed up at Incheon International Airport with flamingo-pink hair back in March, fans immediately knew an EXO-CBX comeback was imminent. More recently, several members of Twice shocked Once (the official name for their fan base) when the group departed for Japan earlier this month with brand-new hair colors. Chaeyoung's fresh tangerine look had to be the most prominent of the bunch. Like clockwork, JYP Entertainment announced a couple of days later that the girl group is coming out with a new album in July.

The concept of concepts

Prior to the big airport reveal, extensive planning goes into picking what color dye is brushed onto an idol's hair. Chaeyoung most likely didn't wake up one morning wanting bright orange hair.

As mentioned in Allure's interview with NCT's Taeyong, K-pop stars distinctly change their hair, makeup, and outfits based on the concept or vibe of their new songs or albums. In just one year, they could have their hair dyed nearly a dozen different colors, depending on how much music they release. Many would argue that BigBang's T.O.P and G-Dragon helped set this precedent.

"One of the allures of K-pop is the anticipation of change," says CJ Kim, who, well, I'm not entirely sure what she does but I do know she's worked as a translator and tour manager for Monsta X, Seventeen, KARD, and Day6. "Fans know that with new releases an artist's look will be completely different from the last release and the biggest change is usually hair, whether it is color changes or styling." Reason being? Hair, more than makeup, is one of the most obvious and visually stimulating ways to show a change in an artist's image, she says.

One of the allures of K-pop is the anticipation of change.

And the colors are never picked at random. Stylists work closely with record labels for months to strategically decide on the next hair color for every member of a group. Kim Taejin, a Seoul-based hair designer, who has worked with GOT7, B1A4, and Apink, tells Allure she puts together a portfolio of looks for the group's agencies before meeting with them several times to select the right colors and styles based on the album's concept. (I can only imagine how the meetings for Baekhyun's red mullet for "Ko Ko Bop" went down.)

Many times hair colors reflect the album in an overtly visual way. Benjamin points out that BTS went brown all around in April for their album, Love Yourself: Tear, which has darker themes like heartbreak. "That concept was a stark difference from 2017's Love Yourself: Her, where the members' hair colors included J-Hope's fire-truck red, RM's rose-gold, and Suga going turquoise," he explains.

In fact, fans have even speculated that Suga, in particular, dyes his hair based on the color of BTS's latest album cover. Although he denied this theory, he's not the only one to coordinate his hair with an album name or song title. The most obvious examples have to be Joy's candy-apple red hair for Red Velvet's "Red Flavor" and T.O.P.'s turquoise hair for BigBang's "Blue." The Rose's Woosung also recently shared with Allure that he bleached his hair a bright-white shade that was almost translucent to echo the name of the band's newest album, "Void."

With this in mind, dramatic new hair colors become markers for K-pop groups' discography. "Hair color allows the fans to remember the album better," James Miju, a Los Angeles-based hair colorist tells Allure. "When you see photos of the artist in a particular hair color, you know exactly which era that picture is from."

The individualization factor of a new hair color

The whole concept of coloring their hair, to begin with, can be attributed to the need for differentiation among not only K-pop stars but also the average person in Korea, David Yi, founder and editor of the men's grooming site Very Good Light, tells Allure. "Korea is a very homogenous country where everyone more or less looks alike with the same aesthetics," he explains. "Put that together with an idol who has the same stylists and makeup artists, and it's difficult to stand out from the crowd." However, with a shock of pink or streaks of purple, an idol becomes set apart from the rest.

And Miju agrees. Because a majority of Korean artists have black or brown hair, "if they all kept their natural hair color, it would be more difficult to distinguish which artist is which, especially for newer artists trying to break through," he adds. Just think of all the times you've watched a group perform for the first time and distinctly remembered one specific member. They probably had a bold hair color, right?

In the case of B.A.P. and Red Velvet, having every member of the group go blonde helped attract attention for their debut, and when they added a new member, respectively. A group-wide move like this, occasionally paired with colored contacts, "created a really different visual style not typically seen in South Korea," Benjamin says.

The historical taboo of bright hair on television

Although CJ Kim says colorful dye jobs have indicated changes for as long as she remembers, they weren't always widely accepted. Back in the 1990s, members of S.E.S. and H.O.T. frequently had to hide their rainbow hair under hats and bandanas because the look was banned on all broadcast stations.

Today, we have men and women expressing themselves with beauty and now Seoul is the most progressive beauty nation in the world.

"SBS, MBC, and KBS said that it was a bad example for young people, so anyone who dyed their hair was considered to be a nuisance and would not be able to show face on TV," Yi says. "It's so crazy how that wasn't so long ago. Today, we have men and women expressing themselves with beauty, and now, Seoul is the most progressive beauty nation in the world."

Miju adds that with social media the changes are more apparent. Thanks to Twitter and Instagram, you can find out about a new hair color the second an idol shows up at an airport, no matter where in the world you are.

The caring and keeping of idols' scalps

Of course, with all the bleaching and coloring, fans tend to worry about their favorite stars going bald. Because hair colorists often see the same idols over and over again, "we know at what point the hair will start breaking and get really damaged, so we try not to get to that point," Kim Taejin says. Depending on the color, she adds that they might come in once a week to keep the hue fresh.

To prevent and remedy any damage to the idol's hair due to the coloring process, Kim Taejin says stylists use bond builders and strengthening treatments like Olaplex. For at-home maintenance, "I personally suggest treatments and shampoos specifically for dyed hair so the colors last longer," Kim Taejin adds. Other stylists who work with idols would probably echo this. Woosung told me his colorist, in particular, recommended that he use a purple shampoo to keep his blonde as platinum as possible.

Sometimes idols even use hair extensions, pieces, and wigs when their own hair is too damaged or when the color they want is not easily achievable. "This is easily identified by hair professionals, but the general audience might not notice it," Miju says. They may also use a color-depositing conditioner to help refresh color in between appointments, he adds.

Mark: explaining why did his sweat became blue and he just died his hair an hour ago
Jackson: *watch Mark and give him new towel to wipe his blue sweat*

When it comes to touring, I have a theory: To save themselves from weekly trips to a salon, members of K-pop groups veer toward more neutral hair tones when they're on the road. Yi hasn't noticed this change-up like I have, but I can't help but think of GOT7's Mark. After promoting the group’s latest album with blonde hair, he dyed his hair a blue-black an hour before taking the stage for the first show of GOT7's world tour. Fans even noticed that his sweat was dripping blue. I haven't asked Mark (yet), but I'm convinced he did so to avoid constant root touchups while on the road. The rest of his team has black hair, so he won't have to be the only one stuck bleaching his hair every couple of weeks.

Next time you catch your favorite K-pop star with pink (or orange or blue or blonde) hair, keep in mind that their rainbow hair is never just a fun way to change up their look. Their colorful new coif was more carefully calculated than your coffee budget.

Related posts:
06/28/2018 Skin & Body Care Comments Off on Why It's Such a Big Deal When a K-Pop Star Dyes Their Hair
Diets News