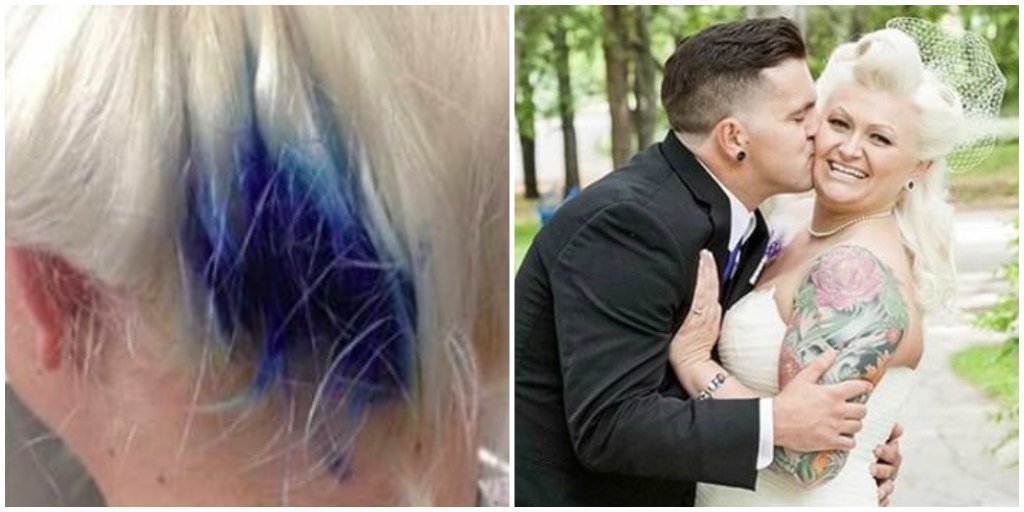 When brides look for "something blue" to wear for their wedding, they have lots of options. Some wear blue shoes, others go for a blue manicure or pedicure; a piece of jewelry with a blue gem is popular option, as is a blue ribbon tied around the bridal bouquet. But one bride in Canada came close to not having a say in her something blue when the pen she was using to keep her hair off her neck exploded just days before the festivities, leaking blue ink all over the back of her platinum-blonde hair.

Colorist Kelly O'Leary-Woodford posted a photo to Instagram earlier this week showing her client, Daphne Martin, with dark blue ink saturating a large patch of her nearly white hair. "One week before my clients wedding, her pen that was in her ponytail burst. What number is this on your "worst ever" scale?! ???" the caption reads. And although O'Leary-Woodford regularly gives her clients blue hair on purpose, she said in the caption that this accident "was the craziest thing I've ever seen."

"I was working at Costco at the time, and I had put a pen into my messy ponytail," Martin tells Allure. "A coworker approached me and told me what had happened, and I was in complete shock." Instead of rushing over to O'Leary-Woodford's salon to try to fix her hair mishap, however, Martin rushed home and attempted to do it herself. (O'Leary-Woodford doesn't advocate doing that, but Martin had actually gone to school to become a hairstylist and felt confident taking matters into her own hands.)

"Let’s just say there was a series of ponytails and kitchen sink hair-washing," says Martin, whose fiancé was put to work as her assistant in this color-correction project. "I washed the area, blew it out, and then applied bleach. Surprisingly enough, five minutes of bleach got that out of my extremely light hair. My hair was back to normal that day — even an hour later, thank goodness."

On one hand, it's amazing that all traces of such a dark blue ink were completely erased from such light hair so quickly. But on the other hand, plantinum is arguably the best hair color this could happen to, since the fix may be the simplest. "If she'd had brown hair, lightener could lighten the [hair] color, so it may be a little trickier," O'Leary-Woodford tells Allure. "I would try to lighten it, then would have to re-color the spot to blend it back in." Good advice for non-blondes who might put a leaky pen in their hair.

Luckily, Martin's hair was back in perfect platinum condition for her wedding, and she hasn't put a pen in her hair since. "Kelly has never let me live it down," she says. "I’ve learned my lesson: No more pens as hair accessories."

Related posts:
08/18/2018 Skin & Body Care Comments Off on This Bride's Pen Exploded in Her Blonde Hair Right Before Her Wedding, and the Photos Are SO Dramatic
Diets News