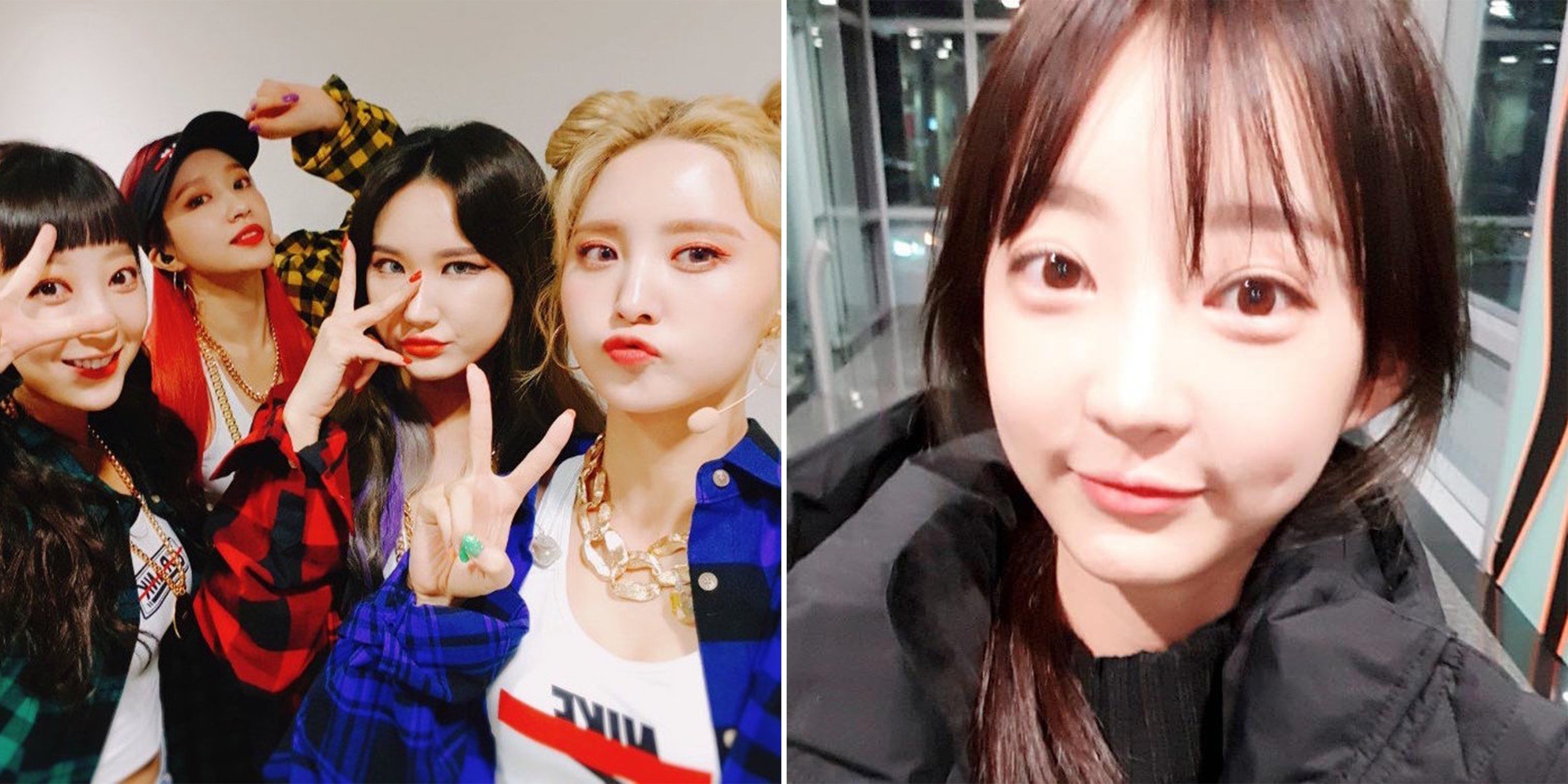 The latter comes from Hyelin, who tells me about her minimalist routine while we're backstage at day two of KCON NY. After asking her how many steps her skin-care regimen consists of, she basically tells me zero. "In the winter, it's dry, so I sometimes put on Vaseline," she says. "That's about it."

My understanding of Korean is slowly but surely getting better, but I look to the translator to make sure I understood the glass-skinned singer correctly. She really only uses Vaseline on her skin? Yes, it's as plain and simple as that. "She's just born with absolutely great skin," Jeonghwa tells me. I wish I could relate.

Jeonghwa's skin-care routine makes much more sense, though. Because the group travels so much — before flying to New York City, they were in Seoul, and days later, they made their way to Tokyo — the 23-year-old switches up the number of steps depending on where she is or the condition of her skin. "There are days when I'm only going to do two steps, but sometimes, it goes up to six or seven steps," Jeonghwa explains. On those days when her routine becomes seven steps, she has the most extensive skin-care routine of the group.

Rapper LE's regimen falls somewhere in the middle. She keeps her routine at about five steps. After she washes her face, LE puts on a toner, a treatment, a serum, and then a moisturizer. For her morning routine, she uses a cream spiked with SPF.

Hani, on the other hand, is almost as low-key with her skin as Hyelin. Originally, her routine was about six steps. "But I've brought it down to about two steps," she says. "Ever since then, my skin has gotten a lot better." She goes on to inform me that the trend in Korea is no longer to adhere to a strict 11-step routine, as Americans have come to know as the trademark of K-beauty. "These days, minimalism is popular, to take away all of the excesses," she says, "so that's what I've been experimenting with."

Surprisingly, EXID is the first girl group I've ever interviewed for Allure about their beauty routines — Korean, American, or otherwise. With beauty's overall focus stereotypically on women, you'd think girl groups would come first in my coverage before boy groups like BTS, NCT, and The Rose. K-pop girl groups rarely come to the U.S., though. In the past year, the closest I got to a girl group was meeting the members of co-ed group KARD, Somin and Jiwoo. Luckily, KCON NY brought four out of five members of EXID my way.

Since K-pop extraordinaire Jeff Benjamin recommended I watch EXID's video for "Night Rather Than Day," the group's incredibly catchy tunes have become fixtures on my commute playlist. I have to acknowledge that this came after my friend Brooke told me to listen to their song, "Boy," though. Seeing their music video changed things for me. Their hair and makeup go beyond the norm of subtle lip tints, flushed cheeks, and soft pink eye shadow in a way that I could thoroughly appreciate.

Known for being one of the more "sexy" girl groups, the members often experiment with their looks. In "Night Rather Than Day," both Hyelin and Jeonghwa's cheeks are covered in fun stickers like freckles; Jeonghwa's hair is dyed buttercup yellow; LE has holographic glitter lips and dramatic double winged liner; Hyelin's ash-gray hair is cut into a pageboy bob, and Hani's lashes are coated in sky-blue mascara.

As Hani puts it, EXID's vibe is "out-there and bright." To put this into perspective, Hani jokes that all the hair colors she's experimented with have nearly covered every letter of ROYGBIV. In the past year alone, she's dyed her hair watermelon pink, candy-apple red, lilac, brown, and blonde. (In the world of K-pop, numerous dye jobs are standard, though.) For her next hue, "I'm thinking I want to try a blue or a navy so I could complete the rainbow," Hani says.

If Hani had it her way, though, EXID's next concept would be very chill. When asked if any of their past concepts fit her personal style best, she says no. "The styling of our albums don't actually match my personality," she explains. "What I like is something very comfortable and natural."

Hyelin could say the same. Yet, she picks "Lady" as the concept that fits her best. "I think expressing the sexy concept is a little harder for me than the other members," she says. "Although there's a bit of sexiness to this concept, there's more of a hip-hop, retro feel to it." If you haven't had a chance to watch the music video yet, I'll sum "Lady" up as EXID looks like a '90s-era girl group that Ashley Banks would line up at 4 a.m. to see in concert in a lost episode of The Fresh Prince of Bel-Air.

Despite not always connecting to their concepts on a personal level, all of the members believe hair and makeup strengthen and motivate them when they're on stage. LE thinks that their looks can change the "aura" of their performances, especially. Jeonghwa agreed, adding that hair and makeup "totally affects our attitude, our facial expressions, our posture."

I have to admit that for most of the interview, the members were completely composed, answering my questions with poise and certainty. However, when I asked my final question, things just about descended into chaos. "If you could wear one shade of lipstick for the rest of your life, what would it be?"

The question doesn't even need to be translated for Jeonghwa and LE to immediately wince in pain. Jeonghwa more or less curls up into the fetal position in her chair. "Oh wow, difficult question," she groans in English. I should have expected a reaction like this from a group of women who told BuzzFeed that they'd rather be able to put on makeup really well than be able to dress really well.

LE, the group's true makeup queen, takes some time to think about it because, as she notes, "There's not just one red. There are so many different shades." She finally settles on what she calls "hot red," which is presumably the fire-engine color that's been a mainstay on her lips since she joined EXID in 2012.

Hani, on the other hand, picks orange-red because she likes warm tones. When it's Jeonghwa's turn to make a decision, she declares, "I choose MLBB color, rose," once again in English. Hyelin is the least conflicted by the question and answers, "I like the red LE is wearing right now." With her bold, smoked-out winged liner and deep berry lipstick, I'd follow LE's lead, too. Sorry, Hyelin, but LE's signature makeup look will work a lot better on me than the straight Vaseline trick.

Related posts:
07/06/2018 Skin & Body Care Comments Off on This K-Pop Star Uses Just ONE Drugstore Product to Get Her Glass Skin
Diets News