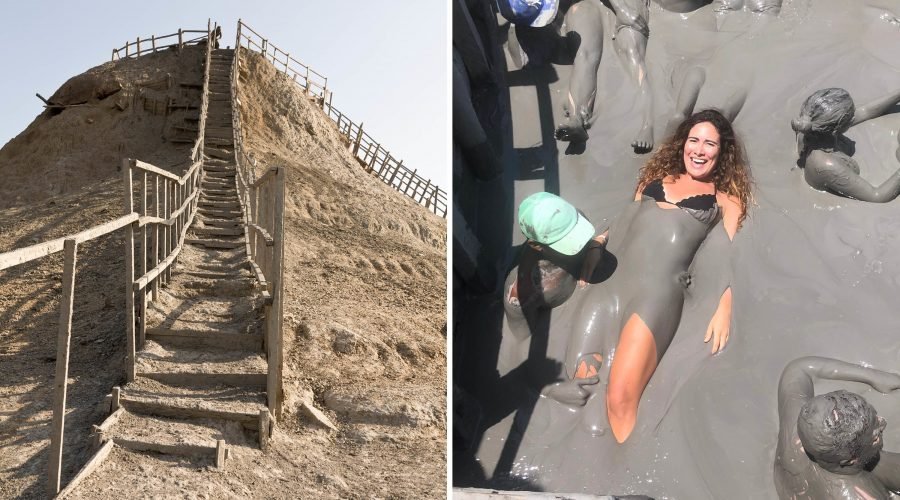 When I heard there was a mud bath that the locals referred to as “the volcano of youth” located an hour outside of Cartagena , I cancelled all of my other plans for my trip to Colombia (which, after two weeks of touring the country, really only consisted of shopping for traditional mochilas wayu and eating empanadas on the beach) and booked myself a seat on an air-conditioned bus for the following morning.

Legend has it that the "Volcan de Lodo El Totumo” (pictured above and below) was once an active volcano believed to be inhabited by the devil, that is until a local priest poured holy water into it and turned it into a soothing mud bath. Now, it’s used for locals and tourists like me to float around in for the sake of better skin… and a few seriously Instagram worthy photos.

While I can’t speak to the origins of the legend itself, I did check in with the pros to see if the volcano’s skin benefits were the real deal or just part of the myth. "For your skin, mud baths function as an exfoliant, [and] for your body, mud baths can help alleviate muscle and joint pains and help circulation,” says Adarsh Vijay Mudgil, dermatologist and dermatopathologist at Mudgil Dermatology in New York City, who notes that the mineral composition of the mud plays a role in its purported benefits. "For instance, muds that contain sulfur have antibacterial and antifungal properties, zinc has wound healing and anti-acne effects, magnesium helps the body repair damaged DNA and is important in reducing inflammation.” The Totumo Volcano is known to be rich in magnesium, and, if the smell of rotten eggs wafting out of it was any indication, there was a whole lot of sulfur in there, too.

When the bus pulled up at the end of a dusty road 20 minutes after I lost cell service, I was shocked to discover what looked more like a pile of dirt than the menacing "volcano" I had been expecting. There were dozens of other people queued up for their turn in the mud, most of whom — like me — had come in on tour buses. It may have been more of a well-advertised tourist trap than the “traditional Colombian experience” that I had been expecting but I didn’t care — the fountain of youth awaited.

I stripped down into the shoddiest bikini I owned (… it is now in the garbage), stored my valuables in some less-than-promising looking lockers, and hopped in the seemingly endless line to wait my turn.

My only previous mudbath experience involved lounging in an spa alabaster tub filled with grade-A minerals and sipping on cucumber water while someone gently massaged my scalp. This was… not that. It was basically a big hole that seriously stank (thanks, sulfur) and had at least 20 other people splashing around in it. It reminded me of one of those National Geographic clips of elephants bathing each other in mud, and I couldn't seem to get the phrase “human soup” out of my head. A few people in front of me took one look at it and chickened out, but I pushed my trepidation aside for the sake of the skin benefits the experience promised.

When it was finally my turn, I walked steadily down the ladder and flopped onto my back straight into the mud. The texture was jarring. It was warm on top but refreshingly cool below the surface, and I felt like I was floating in one of those fancy chocolate fountains I haven't seen since the Bar Mitzvah days. There were men stationed in the mud to keep me from sinking into the depths of the volcano (a very, very real fear of mine), and with a single push, I floated elegantly — or at least, as elegantly as possible in a pile of mud — across the top. For an extra $2, one of them gave me a full-body mud massage and flipped me over and over in the goo like a hotdog in a fondue pot.

I tried not to think about the fact that I was floating in a vat of dirt, human limbs, and God only knows what else and did my best to enjoy the rub down. And after a few minutes of mental gymnastics, I was into it. Once I was nice and dirty, I made my way over to the lagoon where I stood in tepid, knee-high water to be professionally scrubbed.

While my morning at El Totumo wasn’t exactly the most luxurious spa treatment I’ve ever experienced (OK fine, it was probably one of the least luxurious spa treatments I’ve ever experienced) as legend, and as Mudgil, promised, it did leave my skin feeling baby’s bottom-smooth for almost a week. The sunburn I'd gotten after a few days on the Carribean beaches felt surprisingly soothed, and despite the fact that I had been living on hostel face soap for the better part of a week, the pores on my face felt clean and tightened. After taking an actual shower and hydrating like crazy, I was nothing short of impressed with the glow the experience left me with.

Did I find the fountain of youth? Ehhhh, maybe. But did I have fun looking for it? Definitely, yes.

What Hair Care Means to Women Around the WorldTour the Best Spa in Iceland, the Blue LagoonI Got Gwyneth Paltrow's Favorite $185 Pedicure and My Feet Have Never Looked Better

Related posts:
10/25/2018 Skin & Body Care Comments Off on There's Something Called the "Volcano of Youth" in Colombia and I Got to Bathe In It
Diets News