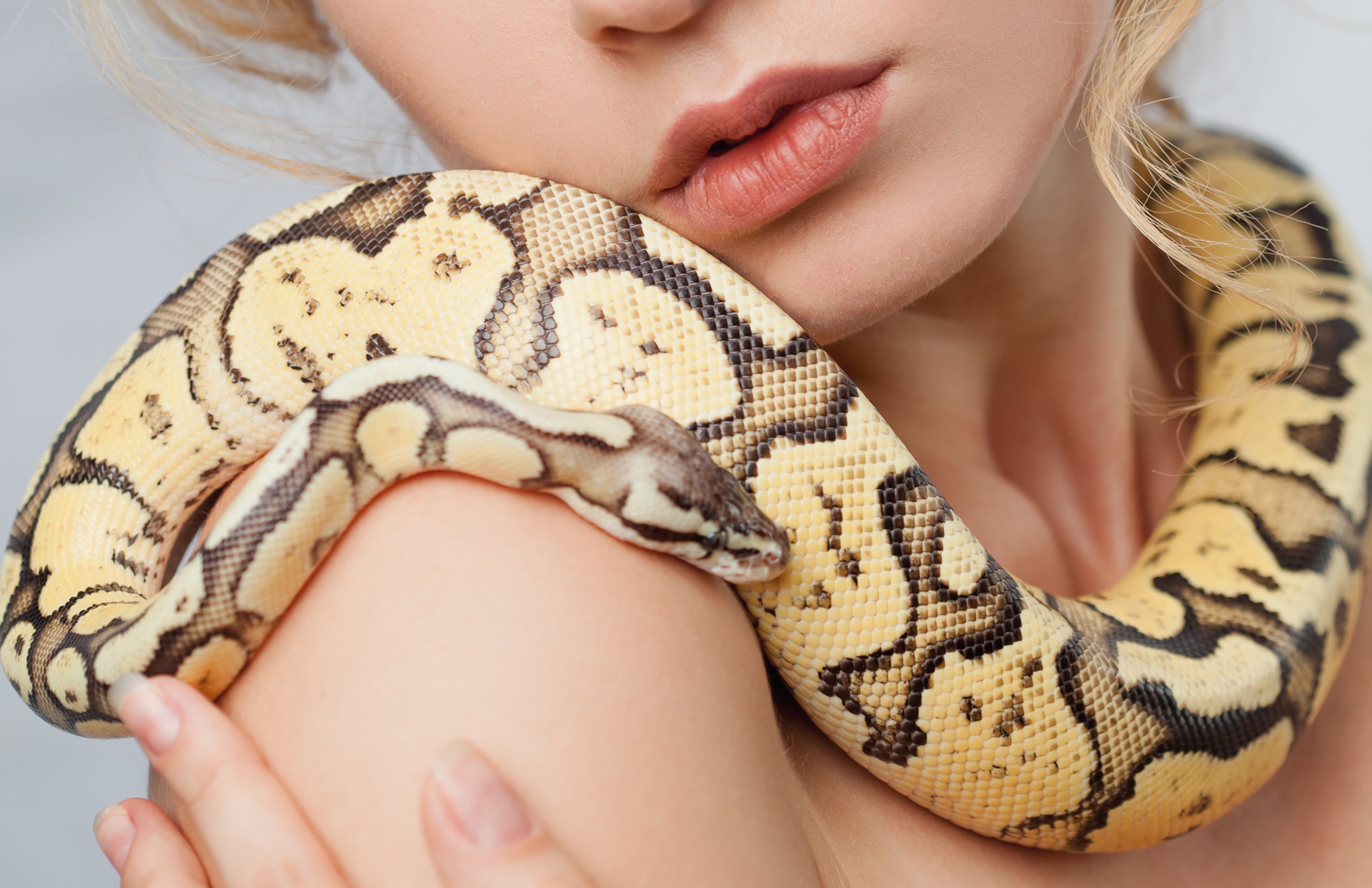 I'm a big fan of massages, even though I was once pretty badly injured while getting one. It was just a regular ol' Swedish massage at a chain spa, but I somehow ended up with tendinitis so severe that my rotator cuff became calcified. (Yes, that's a thing that can happen. Who knew?) The pain was awful, but I'd still choose that type of massage over the kind a woman in Poughkeepsie, New York, is offering: a snake massage.

First of all, get your mind out of the gutter — it's a full-body massage done with actual snakes. CBS affiliate WLNY visited the Hudson Valley establishment where it all goes down (and up, and pretty much all over), Dreaming Goddess, which sells "bohemian clothing and jewelry," as well as candles, incense, oils, crystals, and gems, and also offers tarot divination, rituals, gatherings, and classes. (I'm not entirely sure which category a snake massage falls under.) WLNY spoke with the woman who provides the service and brought along a camera crew to observe the process.

"They tone and stimulate the vagus nerve in our body and that releases endorphins and oxytocin," said Serpentessa, who, I'm guessing, was not given that name at birth, but if she was, then she really committed to its vibe. She tells her clients to "just enjoy them and feel them" — "them" being three boa constrictors that she places on the people brave enough to lie on their backs on her massage table. Although Serpentessa, who says she has been an interspecies facilitator for 25 years, guides the snakes, their path on a client's body can't be controlled.

The jury is out on whether or not this service is a safe one. Lisa Lippman, a veterinarian based in New York City, thinks people should err on the side of caution for several reasons. "Large boa constrictors kill their prey via constricting the animal," Lippman tells Allure, explaining that they are capable of suffocating a human. "Additionally, they can strike when startled. Their bite isn’t venomous, but the snake mouth has a large number of bacteria that could pose a risk to the human after a bite, for infection and even sepsis." She says normal movements by a human can be interpreted by snakes as an aggressive gesture, and there's no way to know what action will startle them.

Interestingly, Serpentessa doesn't entirely disagree. "There are no guarantees with a wild animal," she told WLNY. "You are the one who’s going to choose whether if it’s is safe for you or not. So no one has ever been hurt by one of my boa constrictors," some of which are more than six feet long.

Jayme Waldron, an associate professor in Marshall University's department of biological sciences and an expert in herpetology, tells Allure it may not be that dangerous to get a massage from a boa constrictor — at least not as dangerous as it would be get one from a larger constrictor, like a reticulated python.

As for whether or not the experience is cruel or risky for the snakes providing the service, Waldron says that "snakes are allowed to move around on the massage table, and if so, I think it's fine. Captive snakes spend a lot of time in confined spaces, so, if anything, it might provide some excitement and exercise for them," she says. "The only danger might be associated with folks that exhibit a strong fear of snakes — someone might get scared or nervous and throw a snake off the massage table, although I don’t suspect many snake-fearing types are seeking snake massages."

Serpentessa would probably beg to differ with that suspicion. She told WLNY that getting over a fear of snakes is one of the main reasons people seek out her services, which starts at $300 for a 75-minute session.

I, for one, am not particularly scared of snakes. Waldron, however, nailed the main reason I wouldn't want to give a snake massage a try: "I don't see how it would be pleasant," she tells Allure. "Captive snakes can be pretty stinky, and I wouldn't want them crawling across my face."