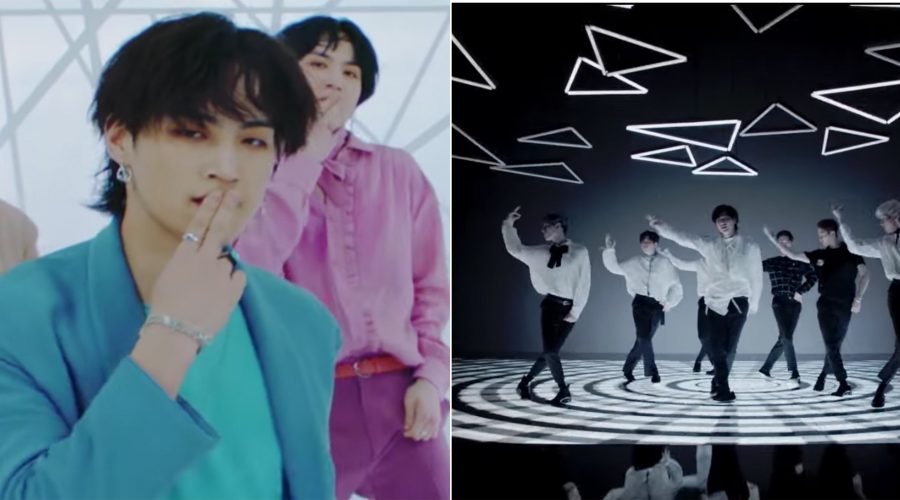 Mondays are a little less terrible when a new GOT7 music video is involved. The South Korean pop group dropped its third album Present: YOU today along with the music video for the title song, "Lullaby." The dancey, body roll-inducing tune is complete with a whimsical-yet-contemporary aesthetic as the members fall into dream-like scenarios.

Of course, I couldn't watch "Lullaby" without spotting some major hair and makeup moments. The septet typically isn't as bold with its makeup as other boy groups. Glitter, floral adornments, and faux freckles are rarely involved. If anything, BamBam is the most daring in the eye-shadow department (not only among his fellow members, but all K-pop groups), but he took a break from his usual shade to try out a trendy look.

The makeup might not typically be as out there, but GOT7 always has a member with rainbow hair and/or a controversial hairstyle. "Lullaby" was no exception. To fit the pastel, fantasy vibe, several of the GOT7 boys officially revealed new dye jobs and hairstyles. Keep scrolling to find out about a particularly polarizing look, as well as the fun new hair color Mark is trying out for this comeback.

With his new metallic pastel purple hair, Mark could have easily walked in the Marc Jacobs Spring 2019 show. High-fashion reference aside, the rapper dyed his hair purple once again. This time, however, it's a rich violet shade with platinum streaks for added dimension. Mark is one of the most experimental members with his hair colors, having tried out out tomato red, sky blue, cotton candy pink, and silvery gray hues. This ultra-violet look has to be one of my favorites, though.

I couldn't help but notice how long and falsie-like Yugyeom's lashes looked in one of his solo scenes. The soft black shadow brushed along his lash line probably gave the illusion that his fringe is fuller than it naturally is. How? The pigment helps fill gaps between lashes. Yugyeom's makeup artist also swept a bronze shade on his lids for extra depth and smokiness.

K-pop stars are no strangers to the no-makeup makeup look. A bit of BB cream here and MLBB lip tint there are staples in the routines of even boy group members. Youngjae showed off an amplified version of this in "Lullaby." His lips were stained with a raspberry lip tint, like the Etude House Dear Darling Water Gel Tint in PK002; his brows were filled in for bolder look, and a subtle brown shadow rimmed his lids for a more defined, brightening effect.

For "Lullaby," Double B swapped out his signature red eye makeup for a dewier look. Throughout the video, you can catch his cheekbones glistening like glass. You can recreate the shimmer-free shine with the Ciaté Dewy Stix, which just won a Best of Beauty Award for its transparent formula. Instead of his usual burgundy shadow, BamBam's lids were topped with a sheer wash of terracotta brown shadow and a clear gloss. A simpler terracotta gloss was swiped onto his lips, too.

Just in time for fall, Jackson lightened up his hair to a pumpkin spice-esque auburn hue. The sides of his hair were also shaved to create an undercut.

Whether you like it or not, JB is committing to the mullet for the second music video in a row. The controversial style is even more obvious in "Lullaby" than it was in "Look," with the back part of his hair longer and the front even shorter and shaggier. Mullets started gaining momentum last year, but JB is proving that the trend is staying strong through the second half of 2018.

No matter how much GOT7 switches up their concepts, Jinyoung is the group's constant. His hair is consistently a dark, natural shade. For "Lullaby," he went black. The style of Jinyoung's hair is also more or less the same from era to era. For this particular one, he stuck with the popular style among Korean singers and actors called "comma" hair, which typically involves one side of the hair slicked back with the other falling in front of the face in the shape of well, a comma. It's simple, sophisticated, and sleek; fitting "Lullaby"'s modern vibe.

The dreaminess of "Lullaby" wouldn't have been complete without one of the members going blonde. BamBam could have been picked based on his experience with high-maintenance hair color. Over the past four years, he has bleached his hair the lightest it could possibly be several times. The process must not have scared him away from going baby white once again.

The rapper complemented his new dye job with fuschia eye shadow that was neither too bright nor too subtle. You could probably find a similar shade in the Huda Beauty Rose Gold Remastered Eyeshadow Palette, which is another 2018 Beauty of Beauty Award winner.

You can catch "Lullaby" below and pick your favorite beauty moments.