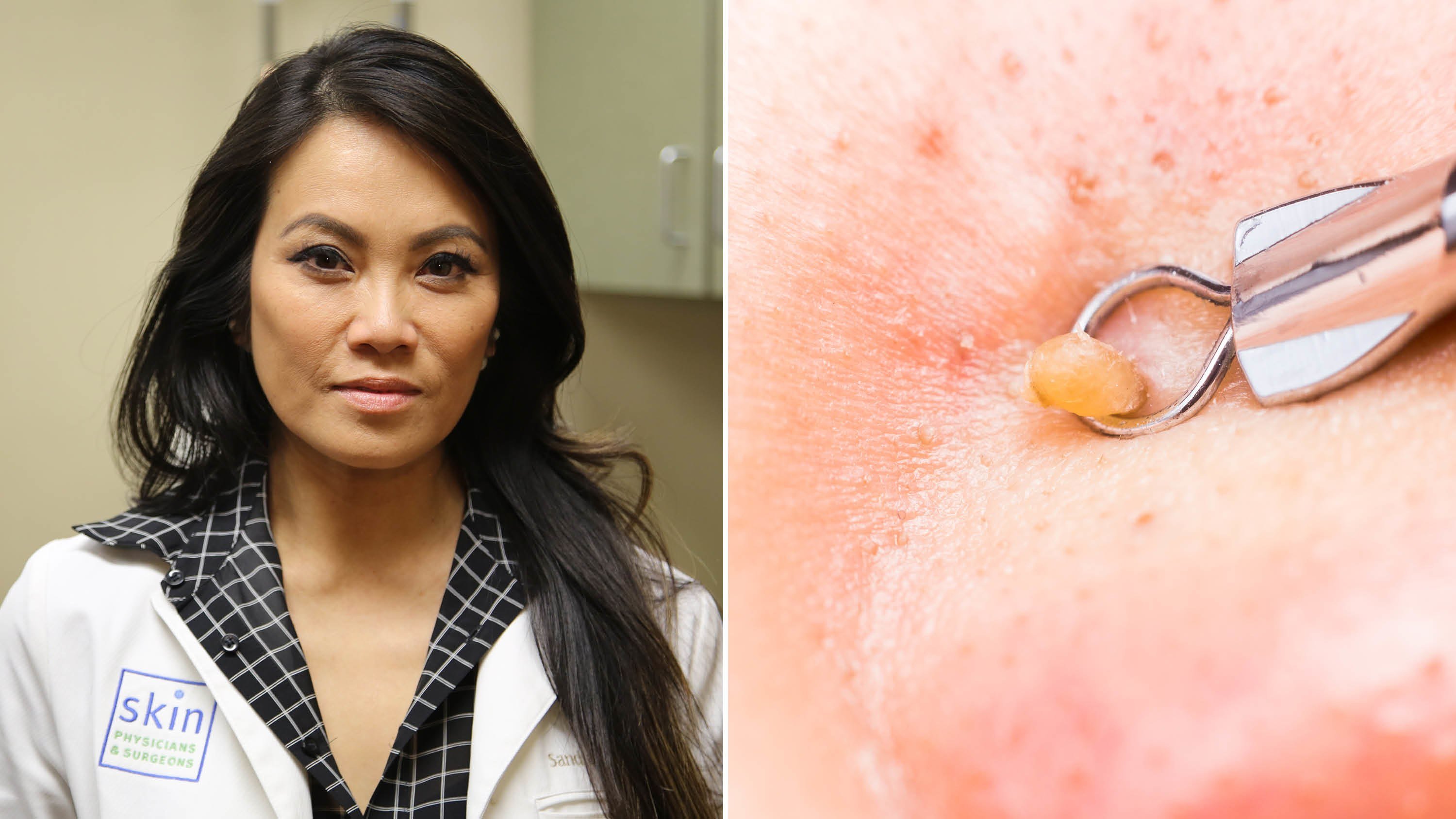 Sometimes, late at night, when I can't fall asleep and have a million or so thoughts zipping through my head, I whip out my phone and proceed directly to Dr. Pimple Popper's YouTube page and…then inevitably fall into a cyst-splattering, blackhead-scrapping hole. You see, I'm one of those people (a Popaholic, if you will), who finds comfort in the unknown world of pimple-popping videos. It doesn't matter how "gross" the content is (hell, the gory the better!), I'll watch each clip from start to finish just to feel a bit of relief after the lump in question has been released.

And based on the growing popularity in pimple-popping content (there's even a TV show surrounding the subject and now a board game), I know I'm not the only one who gets the same sort of satisfaction watching cysts erupt. But, why? I mean, for the non-Popaholic, these videos are borderline horror movie-type shit. So, what's all the hype really about? Curious, I went straight to the source: Sandra Lee, aka Dr. Pimple Popper herself, to find out.

"It makes people feel happy," Lee, a Los Angeles-based dermatologist with 4.1 million YouTube subscribers, tells me over the phone. "[Popping videos] are….relaxing." Listen, I'll be the first to admit that, to me, these videos are therapeutic. Hypnotic, almost. Every time a cyst comes to a head or a blackhead is knocked out of its crevice, I fall into a daze. This is because, as Lee says, it's "soothing" to see something being removed.

"It's oddly satisfying, like bubble wrap," she says. "It's sort of like a roller coaster ride or like a scary movie. You like have a beginning, a middle, and an end, and there's a conflict — and you have to resolve that conflict. A lot of people are initially fascinated with it, because it's like a car crash. You have to look. But, because there's something compelling about it, that keeps their interest."

For me, though, there might actually be another reason why I love popping videos so much. "People also watch my videos over and over as their bedtime stories," says Lee. (Hi, me.) "I think that they feel by removing these contents, it's cleansing the skin, and putting it back to where it should be. For those people who have a little OCD tendency, these videos satisfy that."

She's not wrong. (My therapist and I have had many long chats about my own OCD tendencies, but that's another story.) Watching cottage cheese-esque filling squirt out of someone's shoulder, or pus ooze from an undisclosed lump on someone's cheek makes me feel…grounded. And with the hundreds of popping videos Lee has created herself, you'd think she'd share similar sentiments. Eh, not so much.

"I'm not a Popaholic — I'm a 'born-again Popaholic', I say, because I cannot watch these videos," she says. "My heart starts beating fast, and I can't watch. It's the same kind of reaction as people who are probably grossed out by my videos." Lee says this isn't because of the contents of the videos are too gnarly to stomach (she's a doctor, after all), but because when the clips aren't created by her, she grows concerned for the patient's safety.

"I don't know if that person is in pain. They're screaming, they must be in pain, right?" she says. "Or, look at those dirty finger nails! It's not even clean. I feel like when I'm [extracting], I'm in control, and I know that [the patient] is not uncomfortable."

That's why when viewers see Lee on camera, her demeanor is subdued and she constantly checks in with her patients — mid-extraction — to make sure, more than anything, that they are comfortable. "My patients who come in are really vulnerable, and I don't want them to feel like their doctor feels disgusted by them," says Lee.

"If something sprays out or something looks really gross, we don't make any comment. We're just like, 'Oh, how are the Dodgers?' We talk about other things because it's important for me to act like things are normal. We don't want them to think that we're judging them, or that they are embarrassed of what they have. I mean, honestly, I'm more grossed out by toenail fungus. That's my Kryptonite."