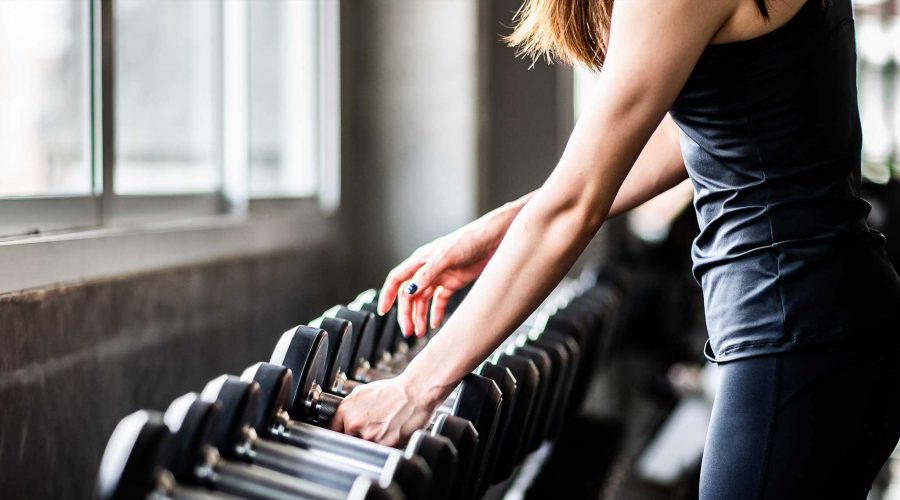 Learning how to lose fat and gain muscle at the same time isn’t easy. But according to experts it can be done—and, what’s more, it’s actually more beneficial and sustainable for your body in the long run.

Phil Catudal, NASM-cpt and nutrition expert, can speak to this. “It’s called body recomposition, and it’s probably the thing I work on most with clients,” he says. The first thing you should know, he says, is that winning the lose fat-gain muscle game requires a serious level of consistency and understanding.

It’s something he stresses clients like Ann (not her real name) who came to him after giving birth to two kids looking for the best way to lose fat but gain muscle too. The two started working together six weeks postpartum, and he developed a plan for her that focused on the two main things that you need to achieve both at the same time: protein and calorie intake. “By the end she was squatting 120 pounds barbells with chains on her waist and looking super badass,” Catudal recalls.

Before undergoing any major changes to your diet or nutrition plan, you should speak to a registered dietitian or doctor. There are, however, some general guidelines and information that applies to healthy adults that you can use that are considered best practices by fitness and nutrition experts.

Keep reading for a beginner’s guide for how to lose fat and gain muscle with advice from Catudal and other health and fitness pros.

Aim for calorie neutrality and increase your activity level.

“When people are trying to lose body fat or weight the typical rule of thumb is a 500 calorie deficit,” Catadul says. This is within the guidelines of the National Academy of Sports Medicine (NASM). But that’s only if you’re focusing simply on weight loss.

Remember, calories give your body the energy it needs to function, but can also be stored as fat. To keep that from happening you have to a) reduce your calorie intake or b) increase your physical activity. If you’re trying to lose fat and gain muscle at the same time, you’re going to want to do both. 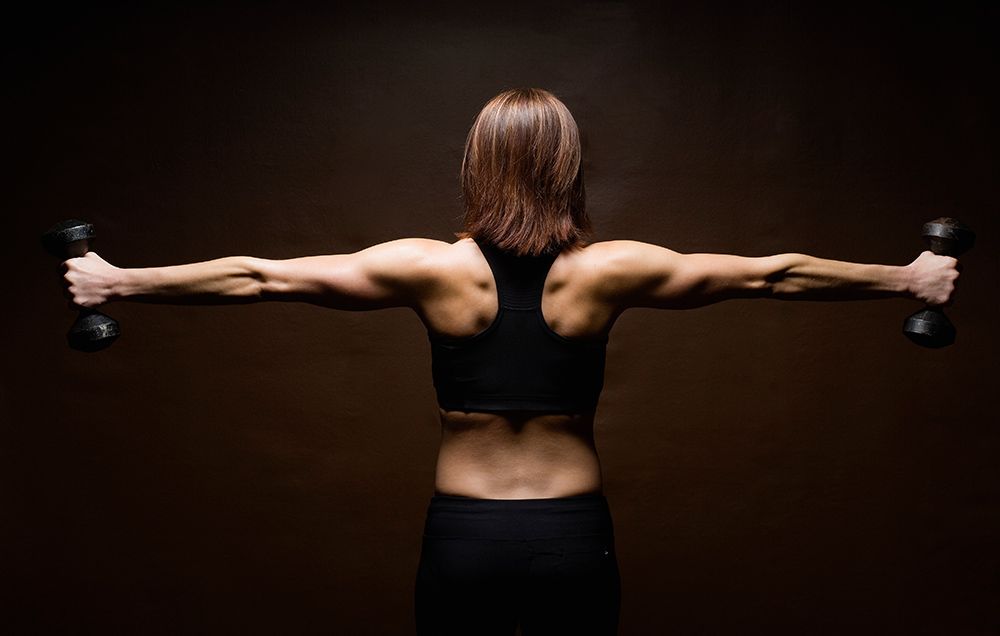 “You need them to go hand in hand, so that you don’t lose muscle mass as you’re losing weight,” says Dina Kader, RD, CDN. “You don’t want go below 1,200 calories a day, because then you also start to break down muscle.“

Catudul’s strategy to lose (or metabolize) fat and gain muscle at the same time involves keeping your caloric intake at exactly your bodies’ needs and sometimes just a bit higher.According to Health.gov, the average caloric intake for women is between 1,600-2,400 calories depending on age, weight, height, and activity level. If you want a more specific analysis, Kader recommends having your dietician perform a bioelectrical impedance analysis (BIA), a highly accurate test for body fat and muscle mass done through electrodes to determine how many calories your body needs.

But let’s say for now that your body needs 1,800 calories. According to Catudul’s plan, you’ll stick to those 1,800 calories on days you’re not working out. And then up that by 200–300 calories on workout days, which is within the range recommended by the NASM.

By doing this, you’re feeding your body enough food to operate at 100 percent. But since you’ll also be increasing your strength training and HIIT training, when you do recover your calories, you’ll be recovering more muscle than fat, Catadul says. And the fat that you do have will be burned for extra energy needed on those tough workouts. 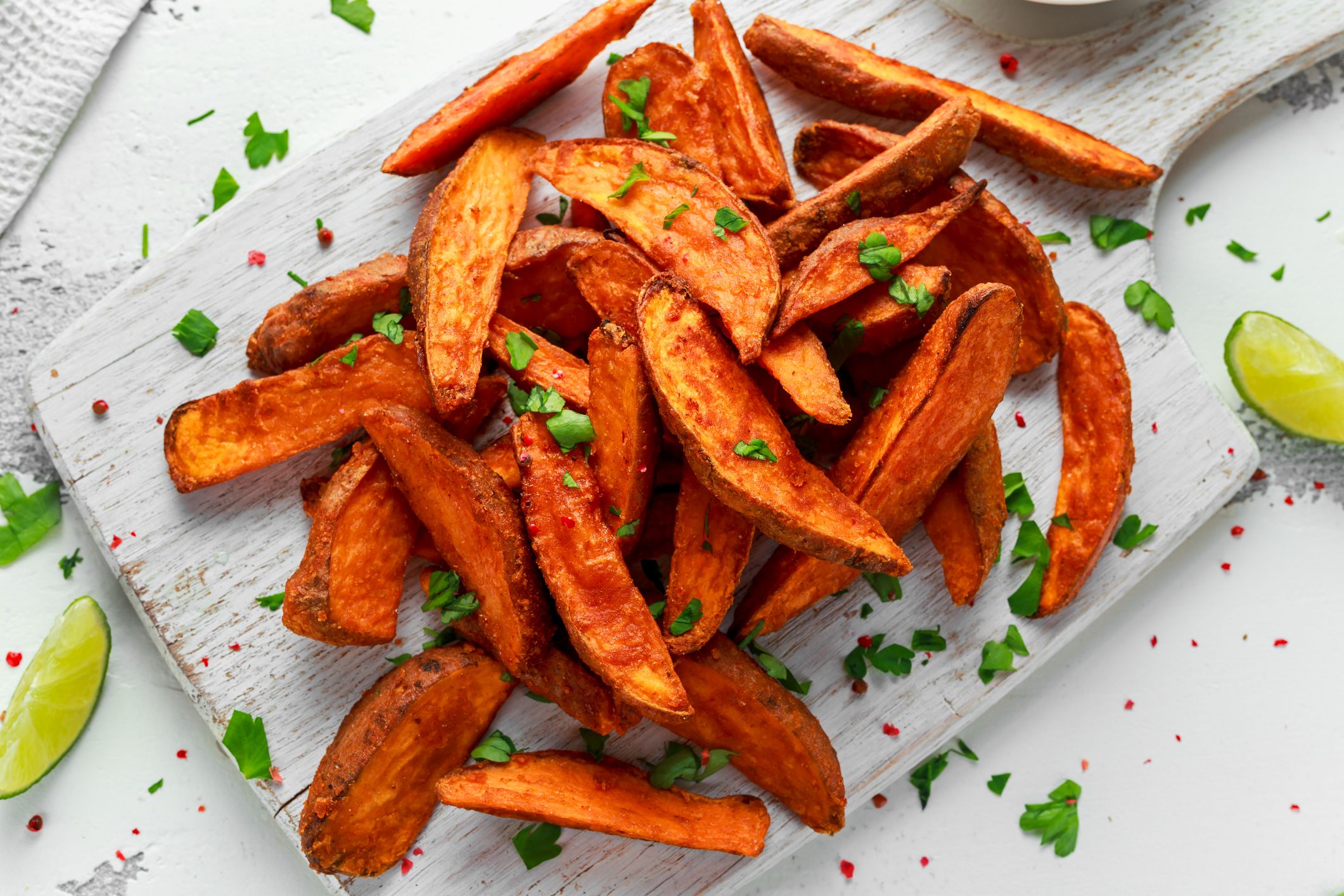 If you don’t want to focus too heavily on calories, that’s definitely an option too, according to Erin Oprea,certified personal and celebrity trainer and founder of the Pretty Muscles workout app. “I never want my clients to be obsessing over their calorie intake,” she says. “I personally don’t count calories and numbers, but I focus on correct serving size and to make sure every time you eat, you get a complex carb and a protein.”

The trainer also makes sure to limit her starches to the morning time. “I do starches early in the day because those are your energy sources. You eat them, get that fuel in your body and burn them off,” she says.

Pro tip: “Don’t obsess over the scale,” Oprea says. Unlike in weight loss where you’re focused on numbers, body recomposition focuses on distribution. Your volume of fat will decrease as you build muscle. But muscle is more dense than fat, which means it takes up less space. So it’s the same weight, it just appears differently.

To really drive the tip above home Catadul says that you should aim to stay within a 4-pound range. “Let’s say I have a woman who is 5’8 and 140 pounds. I’ll want to have her between 138 and 142 the whole time we’re working together,” Catadul says.

Protein should be a main source of your caloric intake.

But if you’re trying to build muscle and lose fat at the same time, you’re going to want to increase your protein intake. Why? “If you’re not getting enough protein while doing heavy weight training, you will not recover from your workouts enough to perform well, which means that you will not put on as much muscle or burn as much fat,” Catadul says. The trainer suggests that around 30+ percent of your calories should come from protein. 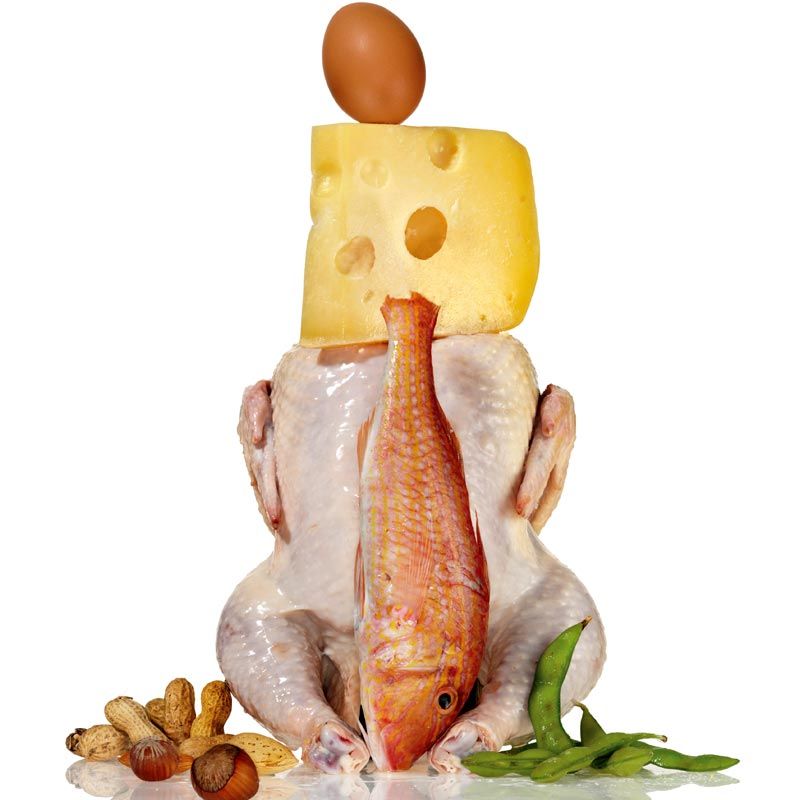 A study from the Journal of Nutrition found that among 24 women, half of whom followed a standard carbohydrate-based diet and the other half who followed a lower carb, higher protein diet (30 percent) showed drastic results in fat loss and muscle mass. Each group ate 1,700 calories a day. After 10 weeks, researchers found that women in both groups had lost an average of 16 pounds each, but that the the standard-diet group lost 10.4 pounds of that weight in body fat and 3 pounds in muscle mass, whereas the higher protein group on average, lost 12.3 pounds in body fat and only 1.7 pounds in muscle mass.

So let’s go back to that 1,800 calorie need. If you want to consume 30 percent of that in protein, you’ll multiply that number by 0.30 to get 540 and then divide it by four (4 calories equals 1 g of protein) which will put you at 135 g. Catadul says most people aiming for 30 percent of their calories in proteins will have a protein intake of 100-150 grams a day.

And you’ll want to sprinkle those proteins throughout each meal. “Having protein at every meal is key. As for carbs, you’ll want to put them before and after your workout,” Catadul says. It will help to fuel for the workout and fuel after to replenish. You’ll also want to intake protein after a workout to rebuild your muscles. Oprea recommends consuming your post-workout protein between 30 minutes to an hour after your workout.

And while there are plenty of proteins to chose from, Khader says plant based proteins (think: pea or sprouted rice proteins) are best because they don’t stress the kidneys. If you’re a meat and fish kind of person, Khader recommends lean meats like chicken and turkey. Other great protein sources from the experts include wild fish, salmon, and beans.If you want to do red meat like beef, do so occasionally considering the fat consistency—Oprea suggests once a week.

Thinking about body recomposition, but you need more vegan protein ideas? Check out this video below:

Catudul and Oprea have similar recs, but Oprea also loves to add in some eggs and for clients worried about boredom sinking, she recommends focusing on seasonings. Her secret sauce? Coconut aminos. “It has a similar taste to teriyaki sauce, but you’re not getting all the salt that will leave you puffy.”

Before you rush to the nearest grocery store to stock up on all these proteins, there are a few you’ll want to steer clear of while shopping, according to Khader. First up is soy. A soy protein will affect the thyroid, she says. And consuming it regularly can make you more sluggish and it harder to lose weight. Another thing to avoid: nuts. “People think they are good protein sources, but they’re too high in fat,” Khader says.

Weightlifting and HIIT training are where you’ll see the most gains.

“Don’t be scared of weight training,” Oprea tells her clients that are worried about looking too jacked. It’s actually a major part in accomplishing fat loss and muscle gains at the same time. 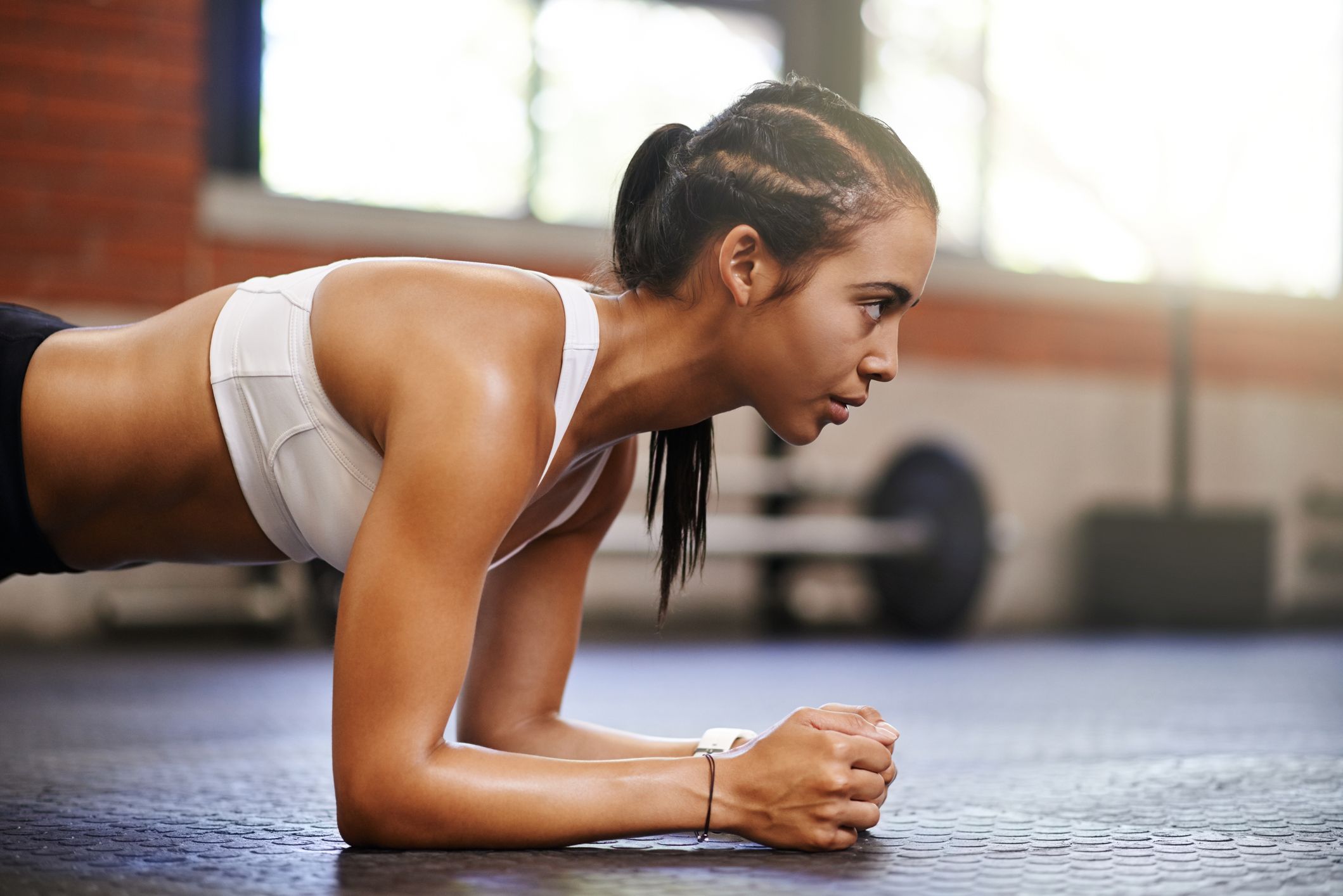 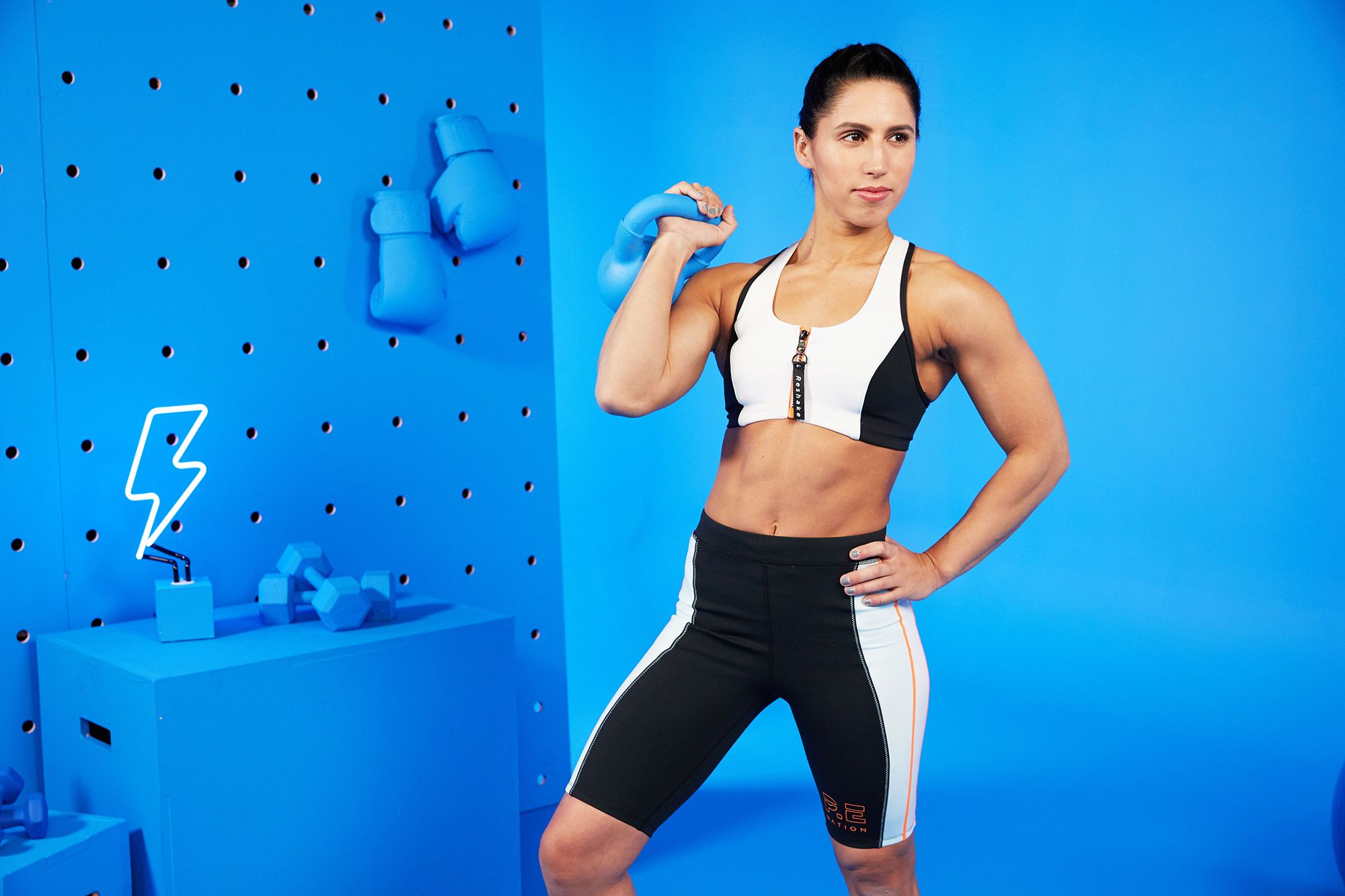 When it comes to body recomposition Catadul recommends 3–4 days a week of 45–minute strength and weight training exercises (machine workouts, free weights, etc.) with 60 second rests in between exercises.

But he’ll also do a 15-20 minute HIIT workout. Oprea’s go-to is a tabbata workout where each round lasts four minutes. You’ll do 20 seconds of all out intensity, followed by 10 seconds of rest, repeated eight times. “HIIT is the most efficient way of burning fat,” Catadul says. “You’ll burn as many calories in a 15–minute hit session as you would in an hour of jogging.”

In terms of recovery, of course your post-workout carbs and proteins will take care of some of that, but Khader also recommends some natural remedies. “If your muscles get sore from working out, when you have a lot of soreness or inflammation you will not burn fat or put on muscle as easily,” Khader says. Instead the body will focus on taking care of the inflammation. That’s why she recommends using weekly salts baths to help relax and provide extra recovery to those muscles. Carving out time in between tougher workouts for active recovery activities will help expedite the healing process too.

All of this means nothing if you’re not getting enough sleep and hydration.

All three experts could not stress this point enough. “If people are poor sleepers they will not burn fat as efficiently and it’s much harder to build muscle,” Khader says. The nutritionist also pointed out that people who don’t get enough sleep are always hungry which means they are at risk for consuming above and beyond the amount of calories they really need.

And there are several studies to back this up. One published by the Public Library of Science studied 1,024 people’s sleeping habits and the participants with short sleep had elevated levels of certain hormones related to appetite regulation and an increased BMI was shown as proportional to decreased sleep.

And of course the other factor, hydration is also and always super important, in body recomposition and in everyday life. “You can’t build muscle if your body is not recovered from the day before in normal life,” Catadul say. “Being hydrated and sleeping are so critical to basic human function. If you do all these things and you’re not drinking water or you’re sleeping four hours a night, it’s either not going to work at all or work so much slower than if you’re body is in a good state.” And who doesn’t want to see results?

As far as timeline goes, the experts all agree that you should start to see results within four weeks if you’ve been consistent. Within a few months, other people will start noticing. And in six months, you’ll see drastic changes. “It’s not easy, but it’s worth it,” Oprea says.

Related posts:
01/30/2020 Fitness Comments Off on Trust Me, You Can Lose Fat And Gain Muscle At The Same D*mn Time
Diets News