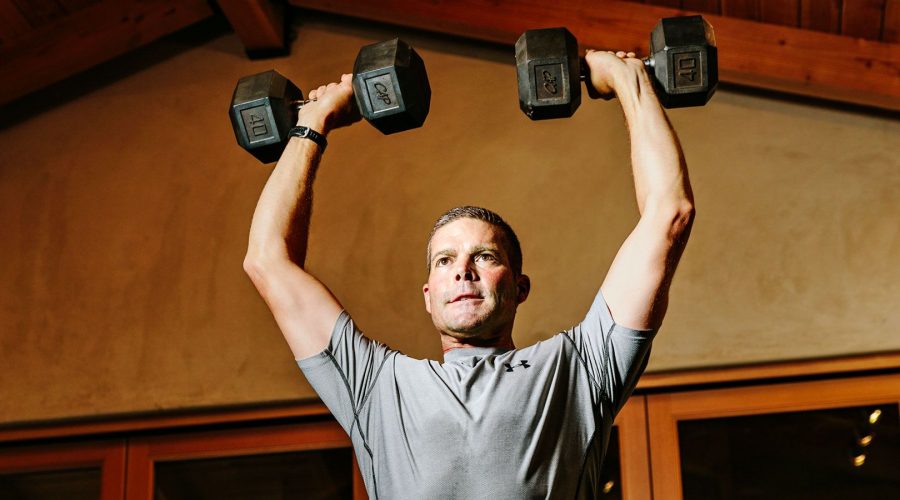 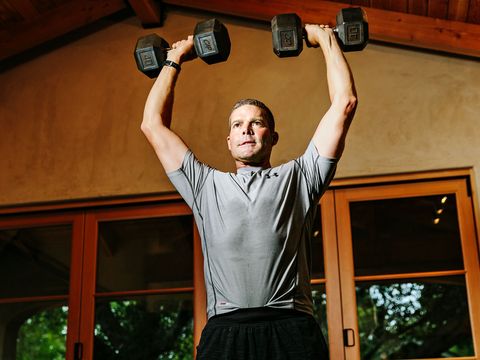 Under a still-dark early-morning sky, on a tile-roofed block in Los Gatos, California, in a small but comprehensive home gym, the 48-year-old CFO of PayPal holds a pair of 45-pound dumbbells overhead, elbows and wrists locked, arms slightly trembling.
Smiling, he counts down: “60, 59, 58 . . .”

Around the half-minute mark, the weightlifter’s grimace takes over.

Running to the Extreme

He has been working out since the fifth grade, when he’d run with his father, John Sr., during what could be called the Great American Jog, the boom in the ’70s that saw millions of people chasing the heels of 1972 American Olympic gold medalist Frank Shorter.

Over the decades, Rainey’s fitness life mirrored the training approach of the nation: Things got extreme. After graduating from Baylor in the 1990s, he fell into a self-described “running boom,” logging  50- to 60-mile weeks and participating in 11 marathons (his personal best: a blistering 3:07).

He tailored his workouts toward improving as a runner, using Excel spreadsheets to track gains in distance, time, and pace for a decade. And he’s pretty sure he owns every single smartwatch that the run-focused company Garmin has ever made. “I’m probably their best customer,” he says.

Those watches get less use now, though, because Rainey has diversified. He still aims to train a whopping eight times a week, but after a series of injuries (including groin injuries and a Lisfranc tear in his foot), he (wisely) mixes up his routine now. There are those home-gym weight sessions two or three times a week, and on Mondays he does vinyasa yoga, which stretches his hip flexors (tight from workdays at his desk) and narrows his focus for an hour that day.

“Like anyone juggling the demands of a job and family, I find myself constantly moving from one thing to the next,” he says. “I find vinyasa is a good way to get grounded heading into the workweek.” On weekends, he hits the bike.

Not that Rainey’s completely given up running. Twice a week, he’ll log a few miles, ideally outdoors. There’s nothing relaxing about holding two dumbbells overhead for a minute, but running remains cathartic and a time when he can collect his thoughts. “If I have a big presentation or TV appearance, I will review it in my head during my run,” he says. “Something about running allows me to spend more mental time on a topic in my head than I would sitting at my desk or in my car.”

Rainey’s runs draw some company, too: Sundays are reserved for running with his two teenage sons.

Can You Keep Up?

Think you can keep up with this super-fit CFO? Try out Rainey’s go-to weight workout: a 45-minute session of fat-torching supersets.

Do each superset in order.

Cardio row: Row as many meters as you can on a cardio row in 60 seconds. Go all out. Standing overhead hold: Stand, holding dumbbells overhead, arms straight. Hold for 60 seconds or until failure. Start with light dumbbells; increase the weight for each workout until you’re holding nearly half your body weight.

Barbell deadlift: Load a bar on the floor with a medium-heavy weight. Bend at the knees and push your butt back, lowering your torso so you can grasp the bar with an overhand grip. Stand up; tighten your glutes as you stand. Do 20 reps.
Pushups: Do 20 reps. Rest 20 seconds.