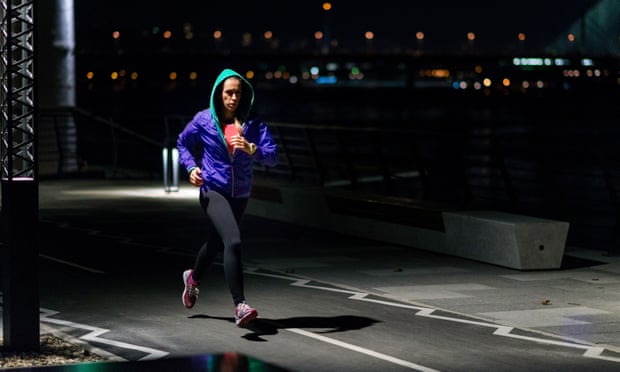 What do you do if you experience unwanted attention while out running on your own? Many women try to ignore it, while others confront their catcallers.

A survey of 2,000 women found a third had experienced some form of sexual harassment while running on their own. The poll, commissioned by England Athletics, also showed half of them feared for their personal safety.

We asked our readers whether they have felt intimidated or harassed while running, and how they deal with it.

Steph, 28, High Wycombe: It’s so common you just need to ignore it

One of the most memorable incidents was when I was out running at dusk. I was quite near the end of my run when I felt a hard slap on my bottom. Two guys on their bikes passed me and hit me (hard enough to leave a red handprint on my behind). The fight-or-flight response eventually kicked in and I ended up trying to chase them on foot. Unfortunately I wasn’t fast enough, but I don’t know what I would have done if I had caught them.

I was upset and angry. I stopped running at night for a long time as I didn’t feel safe any more. Unfortunately I feel like it’s so common to have people comment or harass you when you’re running that you’ve just got to ignore it when it happens. I see harassment as a power play for those doing it – if they don’t get a response, maybe they’ll move on.

Alison, 50, Glasgow: We are running to keep fit, not to display our bits

I have run for 20 years and have seen it all. Most of the time I ignore it, but I once took evasive action and hid from a group of men in a van who spotted me out running in a remote part of the countryside. I was terrified. I also had to jump over a fence and run through a muddy field after a man shouted a comment at me and I could see that he had driven around a roundabout and was coming back to do it again. He had no idea where I had gone but I could see him slowing down and scanning the area looking for me. Terrifying and degrading.

I once challenged some men in a van by asking them if they had a sister, mother or daughter and how it would make that woman feel to be spoken to in the way they had treated me. I was so calm and to the point that they looked mortified and ashamed. Men need to realise how utterly threatening even the most ”innocent” of words can be when directed at a woman on her own. We are not out running to attract men. We are running to keep fit, not to display our bits.

Elaine, 44, Belfast: I’m not going to let some catcalling lout stop me

I usually get supportive nods when out running, but occasionally someone will beep their car horn. I wear headphones so I am blissfully unaware of catcalls and I just focus on my run. I am fortunate that I have never felt threatened while running, but I know many women whose fear of personal safety prevents them from running alone. I have found that I am far more likely to be hassled and catcalled while cycling.

I think women are primed to feel solely responsible for their own safety because many people do comment to me that I’m foolish to run alone at night, as if I am inviting disaster. I’m more worried about being knocked down by a car than being harassed. Harassment isn’t right or fair, but I’m not going to let some catcalling lout prevent me from running. I do feel my area is safe and there is a critical mass of people around that so I would feel confident that I could get help should I need it.

Virginia, 23, Scotland: I run on treadmills now, I hate the feeling of being judged

I tend to run on treadmills now, as I just find running outside in cities too uncomfortable and I hate the feeling of being judged and ogled when I’m just trying to stay fit. I have had to fight hard not to feel ashamed; for a long time I felt like my running in public warranted such behaviour. If it’s a group of men I just avoid eye contact and keep running, but it feels very embarrassing knowing they are staring at me as I go by.

I have never stopped a man to confront him about it, because what would I say? “The way you are looking at me makes me feel uncomfortable?” I think it would just make a bad situation even worse. It’s a shame that my general experience of running past men has been negative, because I know a lot of guys who respect women and wouldn’t do that. I exercise to stay fit and stay in shape for me and no one else, and not for guys to stare at my chest or bum and make comments or whistle at me. It’s frustrating because men can go running at any hour of the day and not feel threatened by women.

Jane, 32, Channel Islands: I have a middle-finger salute at the ready

I am lucky enough to live somewhere safe enough that I can go out while it’s dark and not unduly worry for my safety. However, harassment still happens. Just this morning, during a 400m interval with my CrossFit gym, a blue van honked and its passenger leered out of the window at me. It’s not something my well-built male gym mates have to put up with during their workouts. Some readers might just think this is “banter”, but it’s still enough to put you on edge.

I constantly have a middle-finger salute at the ready (unfortunately breathlessness from running somewhat undermines the scope for sharp, witty comebacks). Following the worst incident about eight years ago (where an Argos driver yelled exactly how he would go about sexually assaulting me), I immediately called his employer on returning home with the intention of getting him sacked. In retrospect, I should have called the police.

Samantha, 24, Liverpool: Gangs of teenage boys tell me to ‘keep those knees up’

I absolutely love running. It makes me feel energised, happy and powerful – like I can achieve anything. I think a lot when I run and it really helps with clarity and creativity. I run in a residential area, and I experience low-level harassment such as staring, cars beeping, shouting, whistling, or men shoving their hands down their pants. Most commonly it’s gangs of teenage boys telling me to “keep those knees up” and shouting after me.

I wish I had good ideas for how to combat it. I tend to run quite fast so I see them first, and get past before they even have a chance to react. In the past, I’ve generally just tried to ignore them. Recently, though, I’ve really wanted to respond but don’t know how. On one occasion I was really angry at some boys for destroying my happy bubble by chanting as I ran past, so I stuck two fingers up at them as I ran away. Suggestions for a more effective response would be great.

Related posts:
10/05/2018 Fitness Comments Off on ‘It’s not just banter, it puts you on edge’: readers on harassment while running
Diets News