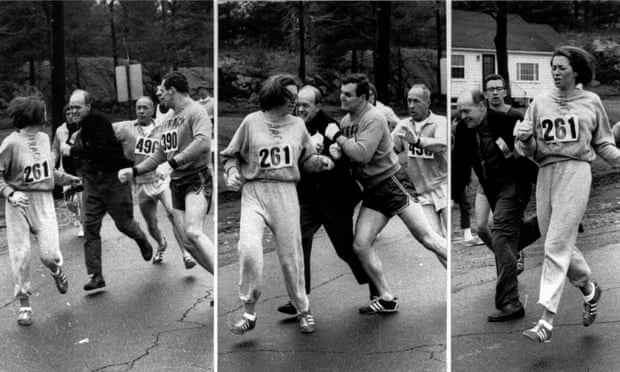 The inaugural Woman Can trail marathon, which starts on a community playing field in the village of Tipton St John, east Devon on 28 May and will attract about 300 women runners and walkers, has illustrious connections. It is the first UK partner event for a global running movement known as 261 Fearless, whose figurehead is the class-act athlete Kathrine Switzer.

Switzer made history in 1967 when, as an amateur athlete with big ambitions, she registered for the world’s oldest road marathon – in Boston, USA – under the name K Switzer. It was, like all long road races, an all-male field, as at the time women weren’t permitted to race over distances farther than 1,500 metres for fear their wombs would drop out. She pinned her number – 261 – on her sweatshirt and started the race alongside her trainer, Arnie, and boyfriend, Tom. When race official Jock Semple spotted the interloper, he tried to manhandle her off the course. Tom barged Semple out of the way.

Shaken but undaunted, Switzer finished the race in 4hr 20min, and kicked off a women’s running revolution. She vowed to be taken seriously as an athlete (she was: her marathon PB is 2hr 51min 37sec, at Boston in 1975); and to win women entry to road marathons (she did: women were admitted to the Boston marathon in 1972, and a women’s marathon event was introduced to the Olympics in 1984).

Switzer, now 70, is marking the 50th anniversary of her audacious entry into the world of distance running by taking part in this year’s Boston marathon as 261 Fearless team leader. She founded the 261 Fearless movement, an international, nonprofit-making women’s movement that focuses on the extraordinary feeling of empowerment that running gives women, whatever their athletic capabilities. The name recalls her number in that historic race and the chutzpah she had to muster to bludgeon her way through male perceptions of women’s limitations.

“My passion has always been to give women opportunities so that they could gain strength and confidence … running is a magic vehicle for making that happen,” says Switzer. “I created 261 Fearless to empower women everywhere, through the direct touch of clubs, events and communication.”

She’s delighted to be the inspiration behind the Women Can marathon in May, which will be first big 261 Fearless event in the UK. The Tipton St John race will be only the second all-female marathon to take place on these shores; the first was the Avon international marathon in London in 1980, organised by Switzer a year ahead of the first London marathon.

Big is, of course, a relative term. Tipton St John is a tiny, if beautiful, village in the rural parish of Ottery St Mary. Its newfound significance in the proud history of women’s running is the work of a local athlete, Jo Earlam, a resident of Tipton for 30 years. Her love of trail running, and devotion to her village, led her to mark the 40th anniversary of its community playing field in 2007 by organising an off-road, 10km race, the Otter Rail and River Run, which has taken place every year since.

The success of that race led to an explosion of interest in running among the women in the area – not quite on the scale of the numbers that signed up to Switzer’s call to train in the 1960s and 70s, but still pretty impressive. Earlam, emboldened by the popularity of the 10k, decided to go the distance to mark the 50th anniversary. “I think Tipton has a strong can-do community. From within the village I know of at least eight women who are running in the marathon/relay on 28 May, some doing a marathon for the first time. And dozens of villagers are signing up to help as volunteers.”

Jo says she’s thrilled to be joining forces with the 261 Fearless movement. “What Kathrine Switzer has achieved for women’s endurance running is truly remarkable. As a keen runner, I couldn’t think of a better way of celebrating her legacy than empowering more women to run a marathon.”

Switzer returns the compliment: “I’m tremendously proud that the Women Can marathon supports all these aims, and all of us at 261 Fearless are delighted to have this great new event as our first official 261 partner event in the UK.”

The route on 28 May is going to be a challenge. It’s certainly not PB material, being mostly off-road and undulating, and far too beautiful to be spent checking your watch. The race, open to Nordic walkers and teams of runners, marks a watershed moment for women in athletics and is, quite literally, a celebration of the women’s movement.

For more information about the Women Can marathon and to sign up, visit www.womencan.co.uk.

Related posts:
10/03/2018 Fitness Comments Off on Introducing the Women Can marathon – and celebrating a running hero
Diets News