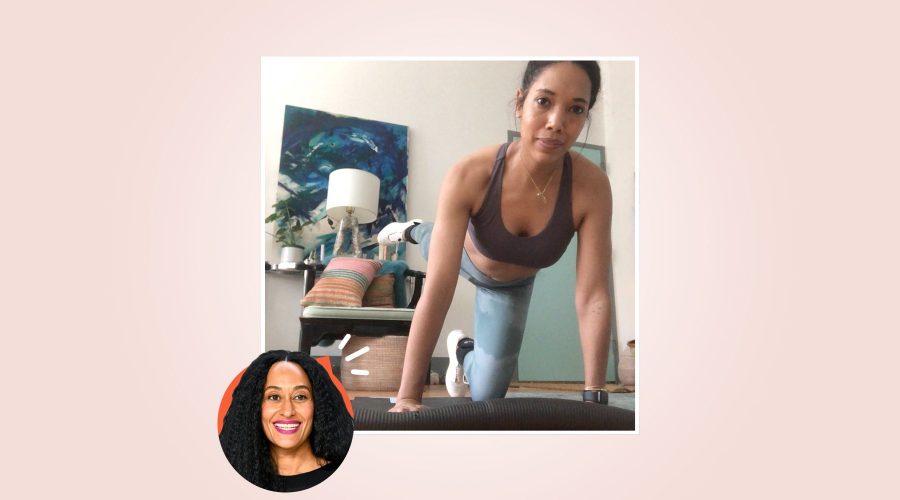 Watching Tracee Ellis Ross work out on Instagram makes me almost as happy as working out myself. There is absolutely zero science to support the idea of endorphins through osmosis, and yet… Everything—from her buns that won’t budge (I’m talking about her workout hairstyle, obvs) to her impeccable activewear choices to her ability to smile while every other inch of her is quaking—sparks joy for me.

Normally, replicating anything about a celeb’s lifestyle—skincare routine, wardrobe, diet—is impossible or hella expensive. But fitness seems to be one area where it’s totally feasible to sweat just like J.Lo or Jennifer (both Aniston and Garner) without dipping into your 401K. This is especially true now that so many celebs are exercising at home via digital workouts, which are way less expensive than sessions with a private trainer. So, I decided to shoot my shot and try working out like Tracee for a week. This meant signing up for a free, two-week trial of the Tracy Anderson Method.

Tracee’s been consistently taking TA Method classes for over five years now. Every week, Anderson introduces one new routine for each fitness level—beginner, intermediate, and advanced—and suggests that you do whichever one you choose four to seven times. (Yes, you can work out every day if you’re smart about it.) The following week, it’s a whole new routine, and Anderson prides herself on not repeating her sequences, so you never know what to expect. “I love the workouts and have been doing it for years,” Tracee wrote in a caption of herself taking one of Anderson’s at-home workouts. “It keeps me strong and long with a little jiggle. Just like I like!”

I thought I knew what I was in for, but I was wrong.

Personally, I’ve done so. many. reps. of squats, leg lifts, and biceps curls over the last several months in quarantine that my body was craving a new get-fit routine. My workout plan seemed simple—in theory. I decided to do the intermediate class three times a week since Tracee has previously said that she exercises three to four times per week—normally twice on the weekends and at least once on a weekday morning…at 6 a.m.

‘It became very clear almost immediately that my delts wouldn’t be able to just dial it in.’

As a fellow early riser, I felt good about this. I decided to start on a Thursday since it’s when Anderson drops new workouts. I grabbed a pair of 3-pound dumbbells (because her classes focus on light weights/high reps), my ankle weights, and a thicker workout mat because I knew we’d be spending lots of time on the floor based on everything I’d gleaned from Tracee’s ‘gram.

Every workout starts off the same way: a quick warm-up followed by a standing arm series with weights. Since I’ve been taking classes in New York City that begin much the same way (so many boutique fitness instructors got their starts at Anderson’s studio that tinges of her method pop up in pretty much every sculpt class), I felt confident that I knew what I was in for. Wrong!

It became very clear almost immediately that my delts wouldn’t be able to just dial it in. I started having a flashback to this video Tracee posted—specifically, that look that says “Help me!” at about the five-second mark.

It wasn’t so much the moves themselves, which consisted of standard exercises like raises, presses, and triceps kickbacks—it was how long you’re asked to suspend your limbs in the air. I began to question whether or not being able to actually feel my arms was a sensation I needed.

This is a great time to explain that the TA Method is designed to work your muscles to the point of exhaustion in order to increase their endurance. Anderson drives this message home by picking workout playlists with songs that each last about as long as Bohemian Rhapsody. We didn’t stop moving our arms for two full tracks, and by the end, those “light” weights felt like lifting boulders and I’d lost track of reps entirely; I was so far in the zone.

But before I had a chance to mourn too much for my triceps, I had to hurry up and put on my ankle weights to start the leg portion of the class because Anderson (who breaks her workouts into three main parts—arms, lower body, abs) transitions between these sections faster than a triathlete trying to win a race. I barely got my velcro to stick before the first lower-body sequence began.

In an effort to fully embrace my week of working out like Tracee, I decided to video tape myself doing it… I want to start by saying that Tracee makes shooting yourself working out seem super easy, IDK, maybe because she’s an actress and TV producer IRL. I spent almost as long trying to figure out where to put my phone as I did picking out an outfit that I thought was worthy of her activewear flex. Now, roll the tape!

That’s mere moments of the 60 minutes I spent sweating like Tracee. If I’d sped it up, you would have seen me lift and swing and kick my legs in ways I didn’t think were possible. Anderson introduced me to muscles in my butt that I never knew existed, and I’m a certified trainer. It’s one thing to understand human anatomy…it’s quite another to feel every inch of it due to delayed onset muscle soreness.

Yet I couldn’t stop coming back for more…

As I did the workout again…and again, over the coming days, my mood oscillated between feeling masochistic and incredible. After a week of asking my body to move in ways it never had before, I began to understand why Tracee could shake her head and shout, “She crazy! She crazy!” at Anderson on her TV screen (check timestamp 30 seconds for the receipts), but keep coming back for more.

It’s the same reason I decided to start paying for a $90 monthly subscription after my 14-day free trial finished. There is, after all, a method to her madness.

Related posts:
06/27/2020 Fitness Comments Off on ‘I Worked Out Like Tracee Ellis Ross For A Week And Now I Know Why She’s So Fit’
Diets News