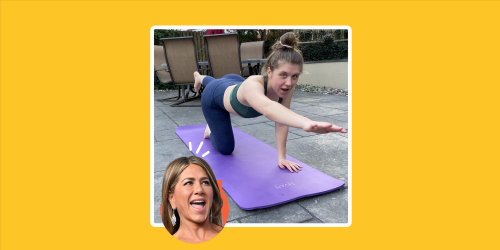 Let’s face it. We’re all wondering just how Jennifer Aniston, 51, has stayed fit for so damn long. From her days as our beloved Rachel in Friends to playing an ambitious AF news anchor in The Morning Show, Jennifer has been gracing America’s television screens with her amazing acting skills and seriously toned bod for so. many. years.

That said, I obviously wanted in on her secret. WH spoke to Jen’s trainer Leyon Azubuike about the actress’ fitness routine, and let’s just say it’s, um, hard. Jen works out almost every day for up to an hour and a half each session, sometimes waking up at 3 a.m. if she’s got to get a sweat in before a photoshoot.

While I’m definitely not on that level (I can stay awake until 3 a.m. bingeing YouTube videos, but I definitely cannot wake up any earlier than 8:30 a.m.), I was eager to give Jennifer’s hyped up regimen a shot. And don’t worry, since everyone’s stuck inside (yes, even Jen) all of these workouts are totally quarantine friendly. Now, come along with me on this very sweaty ~Jennifer journey~.

Believe it or not, Jen is a boxing fanatic. That’s why her and Azubuike are a great fit: He’s the owner of Gloveworx, a boxing workout studio with locations in both New York and Los Angeles. Their classes look so fun that I reeeally wish I could’ve hopped into a session IRL. But since that’s not possible right now (#stayinside), I did the next best thing. Azubuike has been posting live workouts on his Instagram and YouTube for fans to do at home. Thus, I grabbed my yoga mat and laptop and got to #werk. 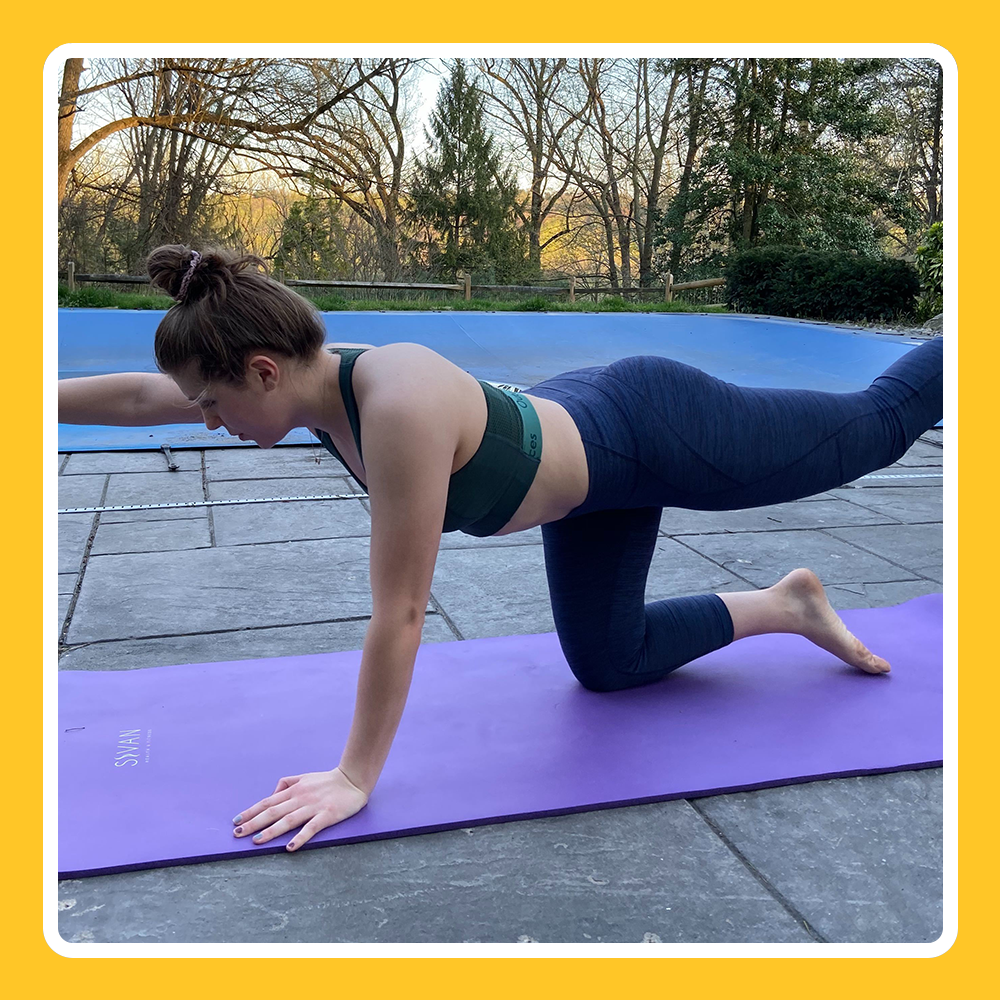 Lemme just say, this part felt like actual heaven. I didn’t know how bad my bod was aching for a little stretch and some gentle movement after sitting around doing work all day. All the tension I was holding in my shoulders and back totally melted away like butter. Next, I went onto YouTube and chose one of Azubuike’s boxing workouts to knock out.

In the beginning I was having, well, fun. Azubuike has the infectious, upbeat energy that I think everyone could use right now, so getting to sweat along with his commentary was a treat. He started the workout with some bodyweight exercises like air squats and high planks which, subtle flex, I felt like I was kind of killing. But let me tell you something: I have NEVER done boxing before. Never in my life. Not once.

When we got to the fighting portion of the workout, I was SO awkward. It looked like I was swatting at flies, randomly flailing my arms around just trying to keep up with the 1-1-2-3 count that Azubuike was shouting in the background, lol. Still, I could see why Jen likes it. Boxing has good, short bursts of cardio with lots of arm-toning work. That, and if you’ve got some pent up aggression (couldn’t be me, hah), this is certainly one healthy way to release it.

After the video ended, I did a set of renegade rows. (Jen’s said she likes to do this type of pulling exercise post-boxing so natch, I had to tack it onto the end on my workout too.) I performed 15 reps on each arm, with some water jugs from my basement fridge.

Even though I only did one set, the rows worked a different section of muscles than I was using during boxing. Basically, my upper body was shot. Brb, won’t be lifting my arms for a year or two.

After a super upbeat workout like boxing the day before, it was def time do an activity that was a little more Zen. Jen has been a self-proclaimed yogi since 2005, so I decided to (again) grab my yoga mat and laptop and get to sweating with an online yoga class.

I started a free trial account with Obé Fitness, a subscription-based website that hosts a lineup of live workouts daily and also has tons of on-demand options to do whatever time of day you’ve got free.

I chose to take a typical yoga class with instructor Beth Cooke. As soon as she walked on screen into the aesthetically pleasing pastel-blue “studio,” whatever stress I was feeling at that moment totally dissipated. Her vibe was suuuper calm and friendly, like I knew that even if she could see me, she wouldn’t judge me for face planting during a chaturanga.

Was it the hardest class I’d ever taken? No, especially not compared to the hot yoga I’ve done as of late. That said, it was relaxing AF, and copying this part of Jen’s fitness routine made me realize that not every workout has to completely drain you. In fact, with yoga, I actually felt more energized than I had pre-savasana. To me, that’s a win.

So we all know that Jen’s got great abs at this point. Whether she’s flaunted them on a movie set or posted them on IG, we’ve all thirsted over her toned-as-hell-stomach-perfection. KK, you get it. But how does the actress maintain said abs? Well, according to Azubuike, it’s through lots of planking. Jen’s standard party trick is that she can hold a plank for three minute! She even has a little ~plank flow~ she does to help her maintain that exercise feat, so I decided to copy it for my final Jennifer-approved workout.

I started by holding a standard high plank for three minutes which was, um, really freaking difficult. Like, my body was literally trembling by minute two, and I had to take a quick 10-second break before starting up again for the last 50 seconds. 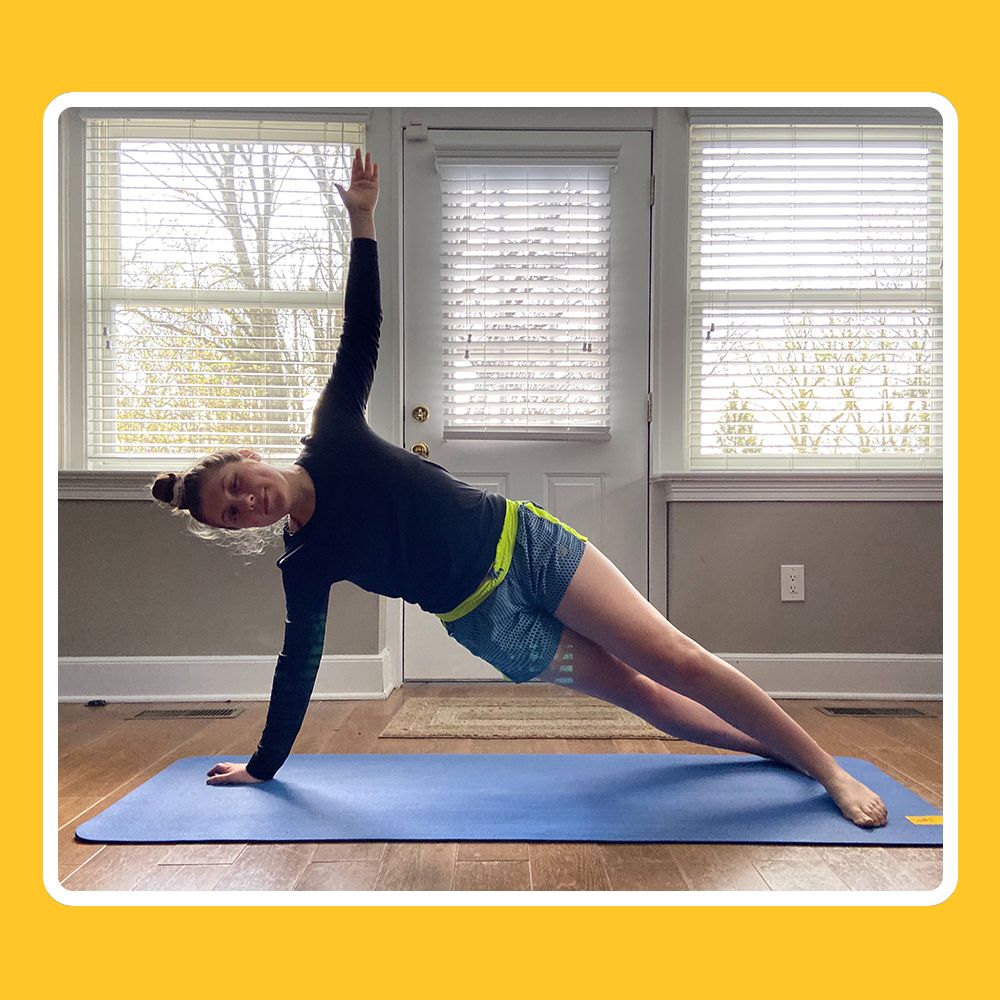 After that was over, my abs were aching, so I was pretty much dreading the next move, which was doing rotating side planks for three minutes straight. This one was (yep) impossible for me at that point, lol. I could only complete about 20 side planks before my arms were about to crack from holding up my own body weight, so I stopped and allowed myself to rest for the remaining time (#treatyourself). Last were plank shoulder taps, which I could not, ahem, do for more than a minute. Major L.

Basically, I would have to repeat Jen’s planking routine pretty much every day for me to be able to successfully do the three-minute series of which she is the (*bows*) absolute master.That said, I felt like Jen’s other workouts were pretty #doable, especially for folks who are looking for ways to sweat while having to stay inside 24/7. Could I replicate her workouts every day? No, and I’m definitely never going to voluntarily wake up at 3 a.m. or exercise for more than an hour like Jen, but I think the actress can serve as a source of inspo for us during this time of at-home sweating.

Related posts:
04/18/2020 Fitness Comments Off on 'I Just Worked Out Like Jennifer Aniston For A Week'
Diets News