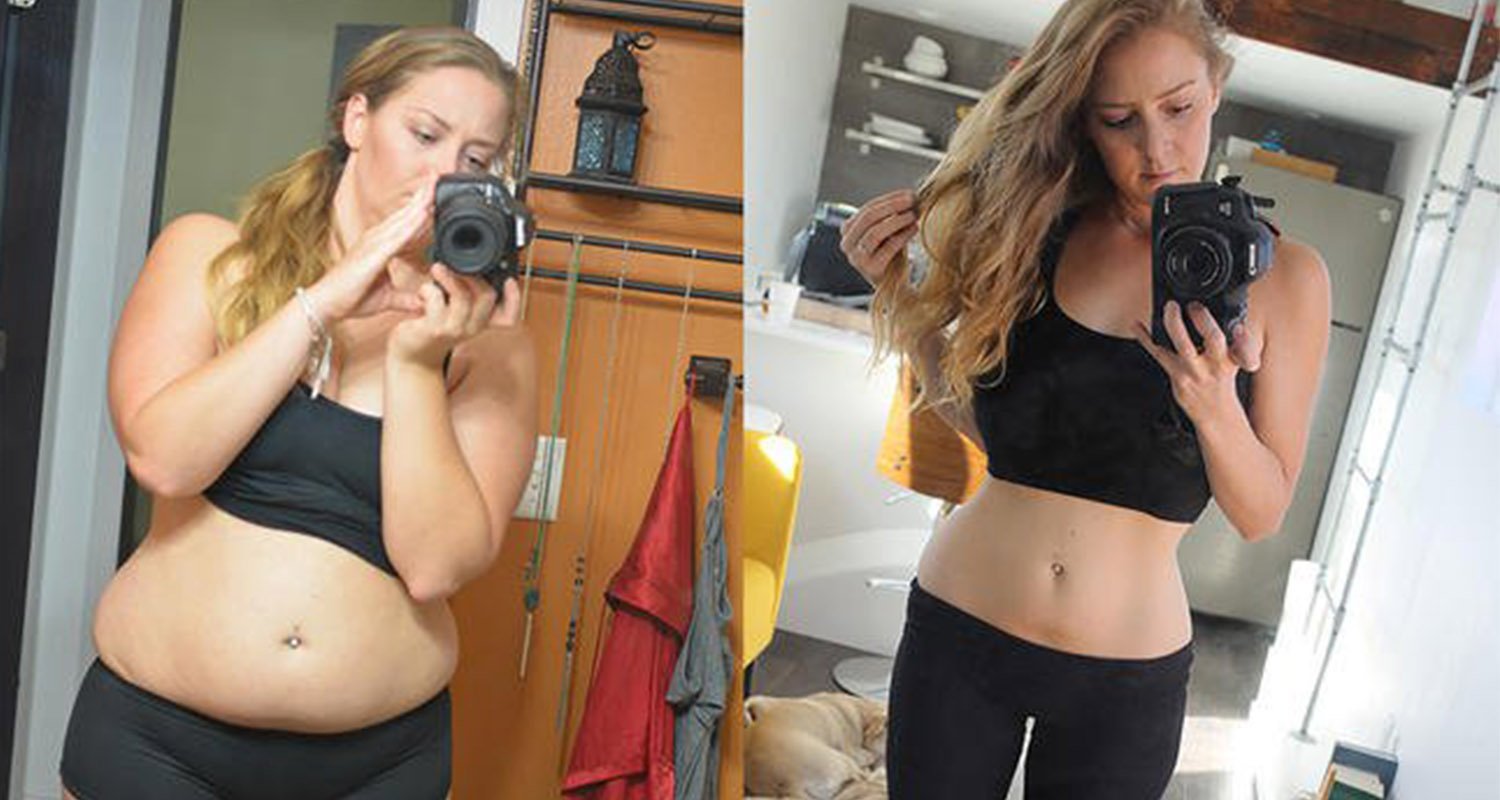 I’ve struggled with my weight my entire life. For years, I yo-yo dieted, and ran through every plan out there from Weight Watchers to Paleo to South Beach. I’d go on a new diet for a couple months, lose 4.5 kilograms, and end up bingeing and gain everything back. I thought every diet would be my saviour, but the more diets I tried, the more weight I gained. On top of that, I never felt like I had the energy to exercise. Similar to my yo-yo dieting, I went through random bouts of exercising but could never make it stick. For years, I felt constantly depressed because I viewed my body so negatively.

RELATED: ​This Is The Diet Jessica Alba Used To Lose 28 Centimetres In 4 Months

When I took my last “before” picture in August of 2014, I was so sick of following restrictive diets. At the time, I was a raw vegan which was too restrictive and resulted in me bingeing and gaining weight. Enough was enough and I decided to simply start eating what I wanted, when I wanted. I knew I wanted to stick with a plant-based diet, but other than that, there were no restrictions. I applied the same mentality to exercise and just promised myself that I would move my body every day in whatever way felt best to me.

RELATED: ‘I Went Raw Vegan For A Week – This Is What Happened’

When I was eating raw, I followed this myth that I could eat as much as possible and lose weight. Before this journey, I would literally have a 10-banana smoothie for breakfast. Lunch was a similar smoothie or a huge serving of fruit. For dinner, I just loaded up on potatoes. I was eating somewhere between 10,460 and 12,552 kilojoules a day and my energy levels were spiking and plummeting all throughout.

Now, I start my morning with a 2092-kilojoule serving of hash browns loaded with veggies like peppers, mushrooms, and onions. For lunch, I’ll have a cup of rice with tons of greens, a cup of beans and maybe an avocado and salsa—basically a veggie burrito bowl. Dinner is typically a large salad with a few small potatoes. Now, instead of having large bowls of fruit as a meal, I eat fruit like bananas and apples as a snack. One constant in my meals is that I never skimp on the carbs (hence, my nickname: High Carb Hannah!) because they help me feel full and energised. Following this meal plan helped me lose the first 18.1 kilograms in just six months.

Before I changed my habits, I was depressed and filled that void with a lot of drinking and smoking. After quitting smoking and abstaining from alcohol for a year, I now have a drink or two a month. If you cut everything out of your diet, it’s not going to work. If going out with your girlfriends is part of your life, have a cocktail, it won’t kill your healthy lifestyle. I think it’s better to have those indulgences. Additionally, my husband and I go out to eat at vegan restaurants about once a week so that’s the only time I have anything oil-based/processed. Those treats help keep me on track because I never feel deprived.

I bought myself a FitBit three years ago when I decided to be more intentional about my activity level. At the time, I was in a job where I ran around a lot and lifted boxes, but I wanted to monitor exactly how many steps I was taking per day. I set myself a goal of 10,000 daily steps and that was the only exercise I ever forced myself to do every day. In addition to that, I usually exercise for an hour about four times a week. What that exercise is depends on my mood. Some days I’ll go on a 16-kilometre bike ride, other days it’s yoga or bodyweight calisthenics exercises. Plus, I did all of this without ever getting a gym membership.

I never really felt like giving up during this process because I made a commitment to only eat foods and do exercise that I love. It wasn’t what I think of as a diet or temporary; rather, it was a healthy way of living.

That isn’t to say that I never felt disappointed. There were times during those last two years that I didn’t lose weight as quickly as I would’ve liked and that was hard. Though I lost those first 18.1 kilograms in six months, I didn’t reach my weight of 54.9 kilograms for another two years. When mapped out, I was only losing half a pound each month. We often think it’s going to be six months of weight loss and then everything will be perfect. But for me, it was more about making a lifestyle shift and that takes time. If weight loss happens quickly, it usually finds its way back. I had to change my entire life to accommodate the person I wanted to be and the life I wanted to live.

This journey changed my entire life. I now have five recipe books and a YouTube channel with over 300,000 subscribers. There, I try to help my followers with all aspects of weight loss. Maybe one day they need help with meal plans, another day it could be advice on motivation. I also like to give them insight into my personal journey with videos recounting how I lost weight and what I eat on an average day. The biggest change is that I feel I have a larger sense of purpose because I get to help people with my story. Before, I was incredibly unhappy and today I feel fulfilled.

Remember that this is going to take some time. You can’t diet for a couple weeks and get your dream body. Find something that you can sustainably do the rest of your life, that will make you feel good. It’s about moulding a healthy lifestyle to fit your life. Give it the time it needs to work. So many people crash, binge, and gain the weight back. Avoid crazy diets and extreme exercise routines and find something you can make last. Once you can do that, keeping the weight off comes pretty effortlessly.