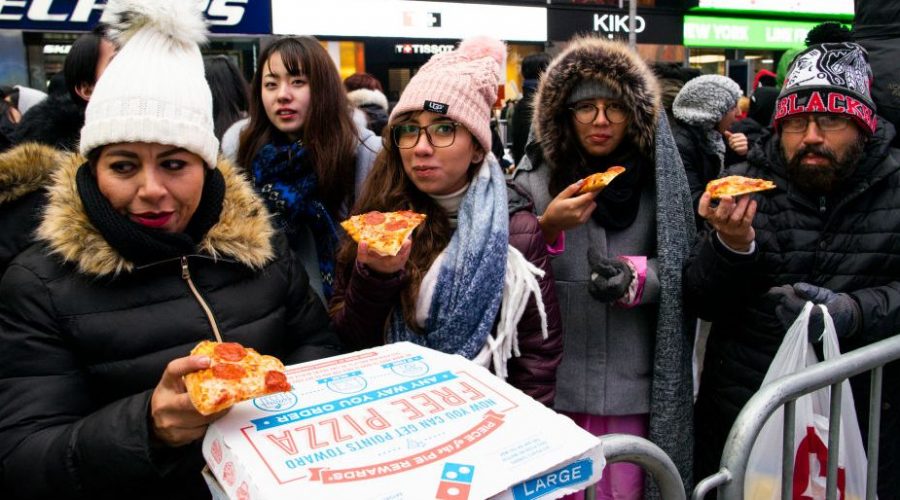 People love Domino’s for plenty of reasons, but the fact that it’s inexpensive is definitely up there. Apparently, though, that wasn’t the case for one New York City location on New Year’s Eve.

A Domino’s on 40th Street and Seventh Avenue had a delivery worker sell $30 pies to people waiting for the ball drop in Times Square, according to the New York Post. Apparently, the hefty price tag didn’t deter people: A woman at that Domino’s told The Post they sold more than 50 pizzas (which normally cost $14.49) by 6 p.m. This is nothing new for them: They’ve been selling jacked-up NYE pizzas in Times Square for more than 15 years.

But the tourists who bought the pizzas seemed like they were okay with the price. “It’s absolutely worth it. It was hot. It seems like it just came out of the oven,” Amit Zanwar told The Post. “If he comes back, I will buy some more.”

Well, New York City mayor Bill de Blasio caught wind of the price hike and had a few things to say about it on Twitter. “Jacking up your prices on people trying to celebrate the holidays? Classy, @Dominos,” he wrote. The mayor also apologized to the people who were “exploited” by the chain and urged them to “stick it to them by patronizing one of our fantastic LOCAL pizzerias.”

Jacking up your prices on people trying to celebrate the holidays? Classy, @dominos.

To the thousands who came to Times Square last night to ring in 2020, I’m sorry this corporate chain exploited you — stick it to them by patronizing one of our fantastic LOCAL pizzerias. pic.twitter.com/rO6I9oYIku

The reactions to de Blasio’s post were definitely mixed, but most people said the higher prices were just good business.

Even at $30 its price competitive with full pies at any of those “local” pizzerias near times square on a normal day, and they have to pay delivery guys to run that pizza through a crown on foot b/c people can’t leave their position to go to a pizza place.

What was he saying? pic.twitter.com/AIa2GulYvT

The last person who should commenting on anything pizza related in NYC pic.twitter.com/ozRQpFrOYQ

Related posts:
01/02/2020 Diet & Food Comments Off on Domino’s Sold $30 Pizzas on New Year’s Eve and People Were Outraged by the Price
Diets News