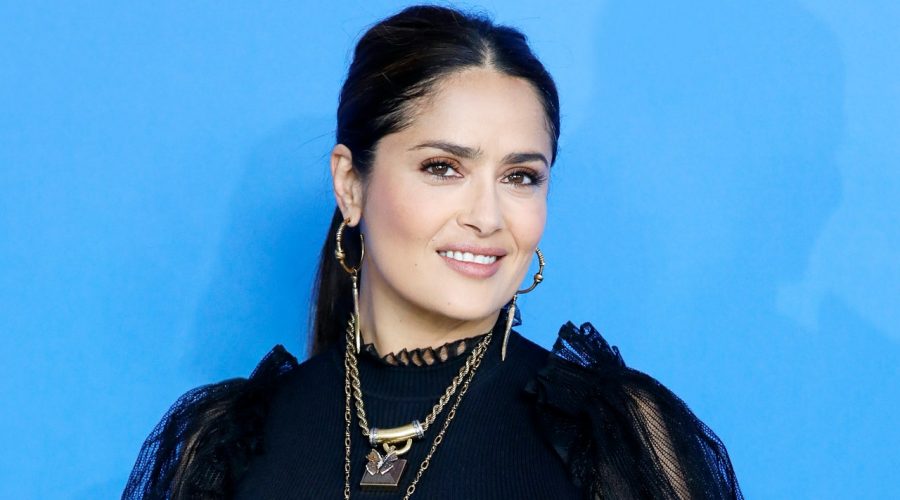 Salma Hayek is the queen of makeup-free selfies — this we've known for a long time. The actor, who turned 54 earlier this month, regularly treats her Instagram followers to grid-worthy glimpses at her bare skin, mascara-less eyes, and unglossed lips, sparking awe and inquiries about her skin-care routine. And in her latest fresh-faced photo, it appears Hayek's hair is now going the makeup-free — or, rather, dye-free — route.

"The white hair of wisdom," Hayek wrote in the caption of a photo she posted to Instagram on Wednesday, September 23. She then repeated the sentiment in Spanish and French: "Las canas de la sabiduría. Les cheveux blancs de la sagesse." The white hair she's referring to is the tiny, sporadic strands that pop out in contrast against the dark brown shade of most of her hair. We can count only about a dozen, but they add a certain je ne sais quoi to her already stunning bare-faced look. ⠀⠀

This isn't the first time we've seen Hayek tease a bit of silver-foxiness. Hayek gave us a peek at her grays a few months ago when, in June, she shared a before-and-after of her color. "In anticipation for reshoots, I finally had to do my roots," she wrote. But in the past, shoots have actually called for her to be fully gray, like in 2018, when she filmed The Hummingbird Project — though, in that case, it was a wig.

That wig showed, however, that should Hayek ever want to every hair on her head to be a "white hair of wisdom," she'll look absolutely incredible.