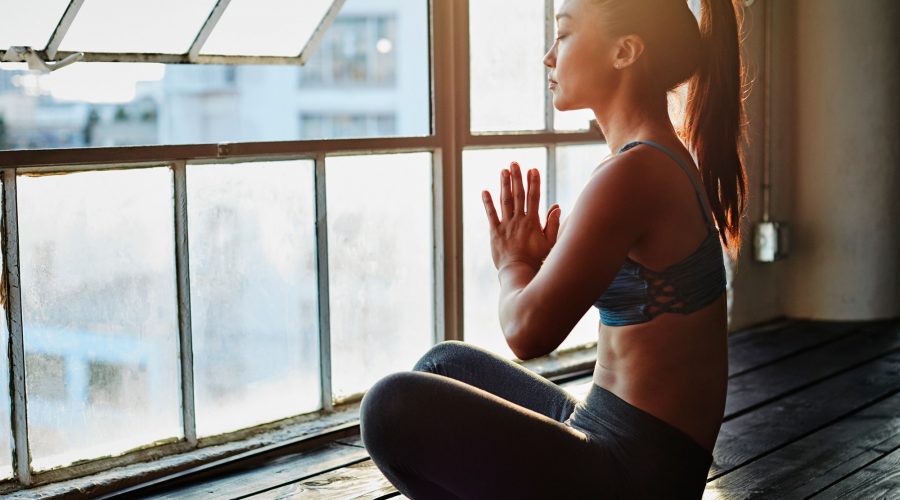 Until around two months ago, meditation was a practice I'd only partaken of when either food or booze — or both! — was promised. Before you judge, let me explain: I'd always been attracted to meditation as I've heard many an anecdote about its amazing life-altering abilities, but because it feels like my brain can run a million miles a minute, I had been hesitant to give it an honest shot. For anyone unfamiliar, meditation is an ancient technique involving intense focus on an object, thought, or activity, and has been used for approximately 5,000 years by those seeking to achieve a clear state of mind.

While scrolling through Instagram one fateful night, I came across MNDFL, a studio in New York City that offers monthly events, some of which involved the aforementioned booze and bites. It seemed like a potentially great way to dip my toe into meditation without diving in head-first — and I wasn't disappointed. During one of MNDFL's event, I munched on a delicious vegan meal whipped up for us by a Brooklyn-based chef. And at another, I got mildly tipsy from sipping on whiskey drinks, an activity we were supposed to be doing mindfully, and somehow managed to land myself a date during the cocktail hour portion of the night. Spoiler alert: We didn't end up dating because he had to go back to London for work, but the experience was pretty thrilling nonetheless.

It wasn't until recently, however, that meditation really started to pique my interest. "Could this tranquility-inducing technique actually make a difference in my quality of life?," I wondered while watching a vlogger rave about how much it had helped her anxiety. Shortly thereafter, I developed an obsession with watching My Meditation Routine videos on YouTube. I found them relaxing and inspiring, which lead me to question yet again whether I should quit watching other people reap its benefits and actually give meditation an real go.

It was a particularly bad series of red, itchy skin flare-ups, spearheaded by a rare and chronic skin condition I have known as Netherton Syndrome, which finally made me pull the plug. In other words, I decided to get serious about trying meditation on a daily basis to see if it would help improve not only the state of my skin, but also my overall well-being and ability to cope with my chronic illness. Now, don't get me wrong — I wasn't expecting a miracle. Considering there are several factors, such as diet, environment, and weather, contributing to my skin woes, but still, I crossed my fingers and hoped for some improvement.

Before embarking on my meditation journey, I consulted Sejal Shah, a dermatologist at Smarter Skin Dermatology in New York City, for her expert insight on the matter. Surprisingly, she came back with good news. "We know that stress and stress-related hormones can adversely affect the skin, so practicing meditation can help to reduce stress, therefore potentially improving the skin's appearance," says Shah.

And with that, so it began. Instead of opting for a class, which from my experience at MNDFL, proved somewhat distracting, I decided to download Headspace, a widely popular guided meditation and mindfulness app that helps you ease into the practice and find a technique that works for you.

Because I'm a meditation newb and because I value my sleep, I started with just five or so minutes in the mornings as a way to gently wake myself and (hopefully) get my mind right for the day ahead. Interested to see how it all turned out, and more importantly: if meditation had a positive impact on my skin? Get all the details, below.

See? I told you it was bad. This is what my complexion looked like every day this particular week.

At the time, I was keeping my routine extremely barebones as to not further irritate my skin, which meant using the iS Clinical Cleansing Complex, Trilogy Antioxidant+ Rosehip Oil, and Weleda Skin Food. It didn't change it up from day to night either, aside from using sunscreen in the morning, of course. I was, and still am, using Skin Medica's Total Defense + Repair Broad Spectrum SPF 34 Tinted Sunscreen. I know for a fact that none of these products make my skin freak out in terms of redness and irritation, and I didn't change them throughout this process.

Now onto the meditation itself. Truth be told, the first week didn't go particularly well. After a booze- and fried food-filled weekend, my skin looked madder than ever. I woke up on the first Monday of my experiment feeling dry as a desert and knew without even looking in the mirror that my face was splotchy and irate. "Starting off on a strong note!" I thought to myself sarcastically before opening the Headspace app. A part of me wanted to give up already, while the other half knew I had to stop being a curmudgeon and see it through.

If you're unfamiliar with Headspace, it offers a wide range of mediation packages you can choose from, including themed versions based on specific topics such as pain management, pregnancy, and managing anxiety. It's cool because it totally allows you to customize your experience. After wielding my way through the app for a few minutes, I decided to keep it simple and start with what it calls your foundation, or the basics, which consists of various guided sessions focused on introducing you to the fundamentals of meditation. This boiled down to mindful breathing and working on becoming more aware of the body and how it responds to the breath. It sounded straightforward, sure, but after two days of trying — and failing — to shut off my mind, I felt like the world's worst meditator.

It wasn't all bad, though. The British narrator's voice is like a literal lullaby (one that almost put me back to sleep, I might add), and even though I was having somewhat of a rocky start, I appreciated his gentle encouragement and lack of unnecessary yogi jargon. Sadly, I didn't notice any positive changes in my skin during the first week, but I did start to enjoy the experience once I came to terms with the fact that it's OK to let your mind do its thang. It also made me feel more in control of my mornings — if that makes any sense.

Week 2: Getting the Hang of It

Midway through my second week of meditation sessions is when I started to see some small-yet-significant changes in my skin. My complexion, while still pink, was decidedly less red than it was the week prior, and I realized that I was no longer resisting the urge to scratch my face during the day. Because I hadn't switched up my diet, sleeping habits, or anything else of that nature, I asked Washington D.C.-based dermatologist Adam Friedman if my new stress-hindering hobby could be to credit.

"It's important to find ways to reduce stress and anxiety because we know that when people are stressed out, there's an increase in nerve signaling that causes itch, which, in turn, can cause people to scratch or pick at their skin, thus creating even more swelling and redness," he says. Come to think of it, every time I'm even remotely stressed out, I start to scratch, whether it's my face or somewhere else on my body.

Needless to say, this was exciting news considering it more or less confirmed that if I could manage to keep my stress levels under control, I might just be able to keep my incessant itching at bay, too. And if my facial coloring turned out to be more even-keeled because of it? Well, that'd just be the cherry on top.

About to hop in the shower post-meditation sesh, feeling very zenned out.

How had I made it to week three already? Time was flying by, but my skin was looking more decent than it had in — dare I say — months. Plus, even though the days seemed to be passing at lightning speed, it felt like I was getting better at being present and taking in moments rather than just moving on with my day and failing to reflect on them.

I was still only meditating five minutes each morning, and by no means had become a master in any way, shape, or form, but I was beginning to realize why so many people swear by meditation and describe it as "life-changing." Was my life changed? Not totally, no. But it had improved, and that was my original wish when I started.

As you can see here, the overall redness is significantly less aggressive than it was during week one.

During my final week, I came to the conclusion that I definitely want to continue practicing meditation on a more regular basis — aka not just showing up for classes when food and alcohol (and adorable British boys) are involved. Sure, it didn't totally transform my skin, and it certainly didn't do miracles overnight, but to see even minor improvements, in regards to itch and redness reduction, happening in such a short time period was still promising in my eyes. Facial redness and pruritus, the fancy medical term for itchy skin, have always served as two major stressors when it comes to my skin health, so it's huge that meditation is making a difference.

Keeping this all in mind: I would highly recommend giving meditation a chance if you also struggle with skin ailments or any type of health condition that's exacerbated by stress. As always, though, consult your physician first to ensure it could be the right move for you.

Related posts:
10/27/2018 Skin & Body Care Comments Off on I Meditated Every Day for a Month in Hopes of Better Skin — Here’s the Verdict
Diets News