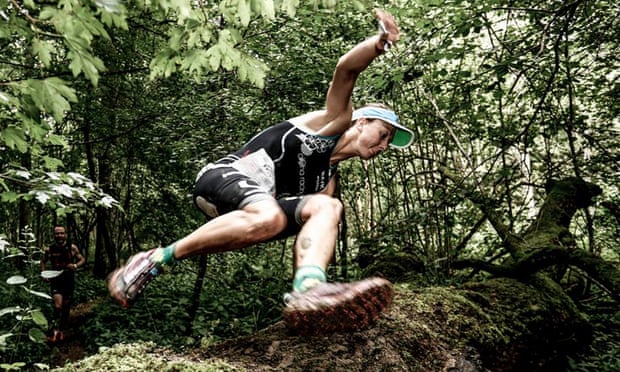 In March I took part in Xterra Malta, my first off-road triathlon, I was new to mountain biking, and grappled my way around without much skill but with plenty of adrenaline. By contrast, Xterra UK takes place in the beautiful English countryside of Cranleigh in Surrey, and I wanted to see how it would play out on home ground.

Having bitten off more than I could chew with my last outing, I decided that 30km of mountain biking was too far outside my comfort zone. It was time to call in some reinforcements and race as part of a team. My only previous experience of mountain biking prior to Malta had been with my father, who had taken me down a black route course in Cannock Chase in Staffordshire. He’d recently retired – could I persuade him to join me in a relay? Then my cousin Michael is a great runner and the 10km trail run would be perfect for him. After a little gentle persuasion they agreed to join me in a family off-road triathlon relay team.

We arrived in Cranleigh following a solid night of heavy rain knowing the course would be incredibly muddy and slippery. I nearly fell over in the car park. As this was the final race of the season and the European final it was hotly contested by elite athletes and age group competitors seeking places in the world final in Hawaii later this year – so there was a real buzz in the air, but thankfully no more rain.

One peek at the start of the mountain bike course and it was clear I’d given myself the easiest leg of the race with a 1.5km swim in the beautiful spring-fed Vachery pond. I’ve mainly been doing long-distance swimming this year so needed to speed up and get a fast time to give my team every advantage. I’m normally aware of having to pace myself in the swim to save enough energy for the rest of the race, but I enjoyed being able to go all out and just swim as hard as I could, and then sprint out of the water at top speed to handover the relay baton – and the race report – to my dad.

While I enjoy mountain biking, I have never competed in a race before so I was a little apprehensive. I hadn’t realised I would be cycling with professional athletes on a circuit that was at times a single track – wouldn’t I just be in their way? The elites set off first and I could see them weaving in and out of the forest covered in mud, going at incredible speeds. They seemed to move effortlessly across the mud and zip around slower riders.

I decided to just go at my own pace, enjoy it and try not to fall off. The course was incredibly wet – it felt like cycling on ice. Plenty of people were covered head to toe in thick mud from falling off numerous times. There was twisting and turning in the dense tree-lined forest – the course had been specially built for the this race, so it was a one-off opportunity to ride this circuit. Once I had completed the first lap of 15k I settled down to enjoy the experience and hearing people cheering. The field had thinned out by now and I found it easier to concentrate on the task ahead rather than worrying that I was holding up one of the lead competitors. I felt great satisfaction in having completed the 30k ride as this had been my first ever experience of such an event, but I was really relieved when I got to hand over the timing chip to Michael – how anyone could run after that cycle is beyond me.

I’m normally more of a 5k road runner so this would be a step up in distance and terrain for me. As I started the run I was obviously on fresh legs but my fellow competitors didn’t realise that. I was passing people and my clean shoes and clothes might have been a bit of a giveaway but fellow runners were cheering me on remarks of, “Well done,” and, “He’s not even sweating.”

The run course was brilliant, a combination of field and single tracks through the woods. There were two ravine jumps, a few tree trunk jumps, one 4ft tree-trunk climb and plenty of ups and downs. I had seen two of the other relay teams go off in front of me so decided to hit the first 5k lap hard and see if I could catch them.

Towards the end of the muddy, single track section I realised the trail shoes I had chosen weren’t up to the task and were caked in mud and I started to slip. I came across the first ravine jump, picked my take off point early and made it cleanly over to big cheers from the marshals and race photographer. The support lifted me up and I cleared the log with one hand, and big smile on my face as I started to remember how much I love running. Sometimes training can leave you too focused on numbers and you forget how fun it is to just run, but the off-road track changed all that. I managed to clean the mud off a bit in some long grass and I bounded off again for the second lap. By the time I arrived at the finish I had an even bigger smile and was happy with my time of 45.20.

A final word from Jo

Related posts:
10/02/2018 Fitness Comments Off on Xterra: how one family did it as a relay
Diets News