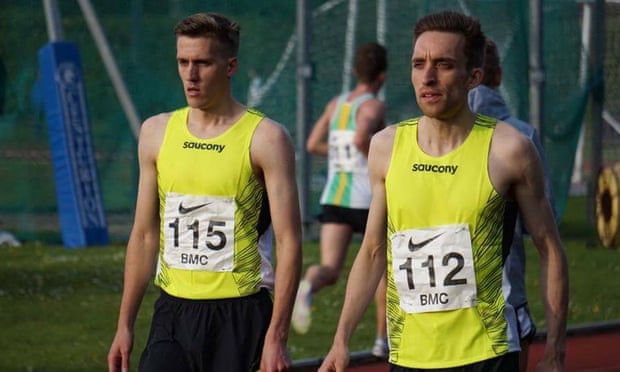 Hi, Ieuan. What have you been up to recently? So much! My girlfriend and I were in London last weekend to see Harry Potter and the Cursed Child. And then it has just been working, running, eating …

Any big races coming up? Yeah, you could say that. Biggest race of my life, I guess. World Athletics Championships steeplechase in front of a home crowd. That’s pretty much as big as it gets, right?

Where’s your favourite place to run? I spent a year at Western State Colorado University, and the running trails were just incredible. When the weather was nice, we would do 16-, 18-mile Sunday runs at 8-10,000ft and we wouldn’t touch the same patch of trail twice. You’d just be running through these mountains with these panoramic views, and you just had this amazing feeling of freedom. Racing-wise, I love racing at the track in Oordegem [Belgium]. It’s where my current personal best was set. After this weekend, though, I could very well have a new favourite track!

Do you remember your first-ever race? We used to have an “endurance” race in my primary-school sports day. It was probably only 200m or so – around a tree and back. I won that! That’s my first racing memory. I also remember a 5k one year when my family was on holiday at Walt Disney World in Florida. I must have been about 12 and ran about 21 minutes or so in an old pair of trainers and some jogging bottoms. Then there was high-school cross country. I came third in one race and got an invitation to run for east Wales, which at the time was a massive deal. I was still running in football boots, and lost one in a really muddy section, so slipped the other shoe off and ran about a quarter of the race shoeless.

How did you make the switch from cross-country to steeplechase? One of the guys I lived with at university was a steeplechaser – I’d always joke with him that I could beat him. Eventually, I had to put my money where my mouth was. I got a spot at the Welsh inter-regionals in the 2k chase. I’m not sure I’d ever jumped a barrier before! It still took a few more years before I took it seriously, though.

What’s different about steeplechase training compared with “standard” track racing? I don’t do many different workouts to the rest of the group during the winter – we’re all trying to build similar bases – but once it gets to the summer, things really break up. We’ll try to mix in my hurdle sessions with normal group sessions – I’ll hurdle in lane two, then swing back into lane one to run with the main pack and then swing back out to lane two. Then, on the rare occasion we can get the water pit filled, I’ll do some post-session or post-run water-jump practice.

When people ask you for a training tip, what do you tell them? Usually something about variation and mixing up training to get the maximum effect. Making hard days hard and easy days easy. Far too many people try to go out and run a personal best every weekend – you need adaptation time for training, and also sufficient rest to make sure your hard sessions are quality. I don’t like to dish out generic advice because I’m just an athlete and not a qualified coach. Everything I know comes from my own experiences and from the amazing people I’ve been fortunate enough to work with.

Do you ever struggle with motivation? Absolutely. There are definitely days when I just can’t bear the thought of getting out of bed. But I’ve never missed a major run or workout because I just didn’t fancy it. The sessions are a social occasion for me as much as anything. It’s just those early mornings in the winter when it’s dark and cold, and my bed is so comfy that motivation wanes. Then, of course, any time you’re injured, you question why you go through it all. Then things like the World Athletics Championship selection happen and it proves it is all worth it, at least to me.

Do you listen to music when you run? If I’m on my own on a long run or I need a little extra motivation on a hard, solo tempo. I’m a big fan of musicals, so if I’m in the right mood I’ll pop some Les Mis or Wicked on the iPod. Most of the time it’s just on shuffle, though.

Do you like a particular running gadget? I absolutely love my Garmin because of the amount of functionality it has, and I’ll always look back over runs to analyse pace, work rate, gradients etc, but I try not to overthink it too much. I do a fair amount of training to heart rate, too, just so I know exactly how hard I’m working – I like to feel that every gadget serves a purpose.

What’s the worst thing about running? Early mornings in the winter. And not being able to go on holiday whenever you want.

What’s the best thing? The satisfaction of success, whether it’s your own or that of your team-mates. The guys I train with are my best friends and running is our social time. We don’t spend time in pubs and clubs – we run instead – so it brings me a lot of joy to see any of my training partners succeed because I feel part of it. My world champs selection belongs to the whole of Team Thie because I wouldn’t be the same athlete without them.

What’s your post-race indulgence? An ice-cold beer or a glass of Penderyn single malt whisky. Bliss.

What do you eat for breakfast before your big runs or a big race? If it’s a morning or early afternoon race then breakfast might be my only meal, so I’ll load up suitably. I’m a big fan of peanut butter and jam bagels. If it’s a later race, I might have egg and beans with toast or a bowl of mixed cereal.

Have you ever run barefoot? I’ll sometimes do my cool-down barefoot on the grass, or do some strides after a run. I wasn’t someone who bought into the barefoot running craze when it started, though. As much as I appreciate the theory behind it, my Sauconys are far too comfortable. I believe anyone who wants to try barefoot running needs to do it very carefully.

If you had to choose who to watch, would it be Mo or Usain? Just from a patriotic perspective, I have to say Mo. There is never going to be another Bolt, and his character has added so much to this sport that I love. But I am a distance runner at heart so love watching the longer races. When both of them are gone from the track there is going to be a serious void to fill.

Who is your favourite-ever runner? That’s pretty hard. Kenenisa Bekele, in my opinion, is the greatest runner of all time and inspired me massively. But most distance runners will say Steve Prefontaine. The cult of Pre definitely sucked me in at a young age. Then you can’t forget Welsh greats such as Steve Jones and my current coach, James Thie. I grew up watching James run, and, as an aspiring middle distance athlete, he was definitely my favourite runner. These days we’re great friends, and he is a fantastic coach and mentor.

Related posts:
09/30/2018 Fitness Comments Off on Steeplechase athlete Ieuan Thomas: ‘The World Championships make it all worth it’
Diets News