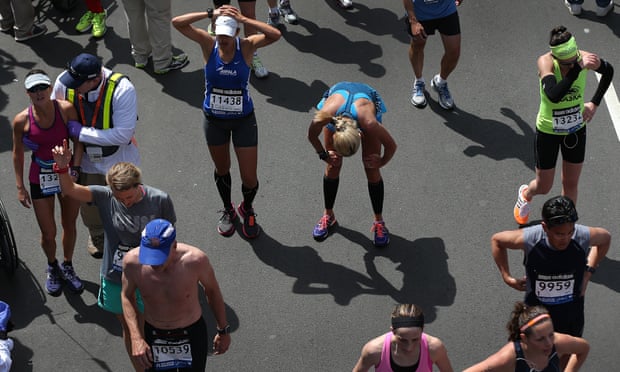 “How did you get on?” the massage therapist asks as I flop down, face-first, having just finished a tough, 10-mile race.

“Could’ve been better,” I mumble, planting my face in the hole. “Started off OK, but struggled a bit after that.”

The table next to me is soon occupied. I look up and recognise the runner I was following for the first few miles, before he glided away from me, out of sight until now.

“How did you get on?” his therapist asks.

The two therapists share a look. “They’re never happy, are they?” says mine.

In fact, I had just run a PB, and I know for a fact that the runner on the table next to me ended up in the prize money that day. Looking at our performances objectively, there was probably not much more we could have done. But was there any chance either of us would admit that? That we would say something upbeat and cheery? That we would actually profess to being happy?

Of course not. No matter how well we do, there’s something about many of us who run for “fun” that stops us from being satisfied with our efforts. No sooner is a race over than the postmortems begin: where we went wrong, what we wish we had avoided, how we should have done better.

This isn’t true only of amateur runners. If anything, the professionals are even less likely to be pleased, no matter how incredible their achievements seem to the rest of us. On breaking the four-minute mile, Roger Bannister immediately described the infamous barrier, which had remained unbroken for so long, as “overrated”, adding that breaking it had been only a matter of time. “Now that it has been broken,” he said prophetically, “I’m sure other runners will break it, too.”

I recently attended a talk by Mara Yamauchi about marathon training. During the Q&A, she was asked to comment on her PB of 2:23 – an astonishing time; the second-fastest by a British woman – set at London in 2009. Yamauchi was reticent about her achievement. She had felt she was in shape for a 2:21 that day, she said. It had been an uneven race; things hadn’t really gone to plan.

Of course, what a person says after a successful race and how they really feel may not be the same thing. But there’s more to it than the need to be seen as modest. Distance running is as much about the process as it is about the results. During a race, all thoughts are on getting to the end. After the race, it’s natural to scrutinise what just happened, and no run is perfect.

Last autumn, I ran a half marathon with the intention of finishing in a particular time. I beat that target by three minutes. I was delighted – but not for long. Soon – very soon – familiar misgivings came to the fore. The pacing was all wrong. Had I pushed a bit harder on that flat stretch between miles seven and nine, I might have finished five minutes faster than my original target.

So, with this new five-minutes-faster goal in mind, I have been training for another half. If I manage it, I will be elated. Briefly. Within minutes, no doubt, my thoughts will turn to what might have been.

Running has given me a tenacity that wasn’t there before – a belief in the importance of keeping going, setting targets and working towards them – and part of that comes from never being fully satisfied, even when things go right.

I will never set a world record, but, even if I did, I probably wouldn’t be completely happy with it – and there’s a strange consolation in that. I’ve come to realise that it’s this inability to accept (admittedly modest) success that saves me from complacency.

If I don’t manage my target time, I will be downhearted. But, crucially, not for long. In no time at all, I will get back to what I was doing before – running reps, pounding streets, getting muddy – until the next time. A race going well or a race going badly means much the same thing: you still need something to aim for. If you don’t manage to reach your target, so be it. Go again.

Samuel Beckett isn’t many people’s idea of a go-to guy for an inspirational running quote, but words from his novella Worstward Ho often rattle around my head following (and sometimes during) a race, and they never fail to comfort me:

To the post-race therapist, who hears nothing but grumbles from the prone bodies laid out on the massage table, it may seem a complete mystery why any of us bother to run at all if it doesn’t make us happy. But we know deep down that joy is to be found in the process as well as the outcome. To complain about our efforts, to talk them down even when things go well, is a means of picking ourselves up mentally so that we will be ready to fail better next time. And there’s always a next time.

Related posts:
10/03/2018 Fitness Comments Off on Running: the art of never being satisfied
Diets News