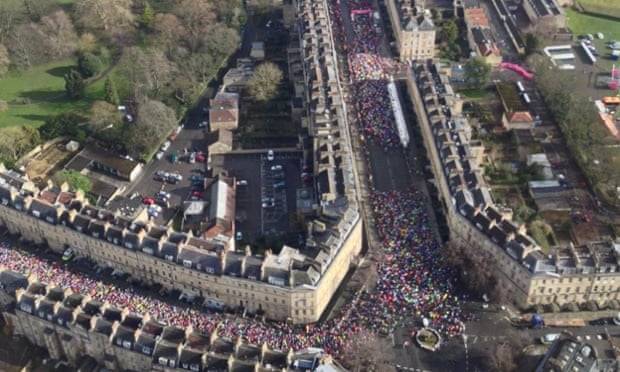 With marathon season looming, tis now the pre-marathon half marathon warmup races season. Of course, for many people running the Bath Half on Sunday, the race was the culmination of weeks of training and preparation, but for me and many others it was a stepping stone towards The Big One.

London in April will be my fifth marathon, but it’s the first time I’ve ever employed a coach to help me with my training. Until now I’ve never even followed a set schedule, but have just made it up as I’ve gone along – making sure I get in a good mix of long runs, steady runs and interval training each week.

So far under the guidance of coach Thomas Craggs, I’ve been feeling mostly tired. He started coaching me after Christmas – during which I’d run little, eaten a lot, and put on a decent amount of weight. He had me doing lots of threshold running and Kenyan hills – which involve running up a hill hard, then turning around and running down it hard. Then back up hard, and so on for a set amount of time. It’s a session, incidentally, I never saw once in six months of running in Kenya.

Despite Tom’s best efforts, I thought the Bath Half, only two short months later, had come too soon. In most of my training sessions I was feeling tired, and I hadn’t particularly tapered for the race. It was also blowing a fair breeze as we lined up in one of those iconic sandstone Bath streets ready to start.

The course laps around the flat part of the city twice, avoiding the huge hills for which Bath is famous. I reached halfway bang on my target pace of just below my PB. This is what I usually do, but in almost every previous race ever, things start unravelling shortly after halfway. The pace starts to slip, my legs start to complain, people start streaking past me on all sides. But somehow, this time, it didn’t happen. The crowd all along the route, waving and cheering, helped, as did the fact that we had the wind behind us for the last three miles, but my legs just kept turning over at the same speed. Faster and faster, in fact. Even a small stitch couldn’t slow me down, and I crossed the line with a big smile on my face as the clock showed 1:17:41 – a PB by about a minute.

Tom was there to greet me afterwards. Tom’s coaching group, RunningwithUs, also includes the race winner, Paul Martelletti (coached by Tom’s partner Nick Anderson). I couldn’t help but give Tom a hug. The training was working. Roll on London.

Was it a weekend of heart-warming success for you, or did you struggle around a course somewhere cursing your defective body? I’ve been there many times. Or did you just run for the sheer joy of it across some sun-drenched meadow somewhere? As usual, whatever you got up to, let us know below the line.

Related posts:
10/01/2018 Fitness Comments Off on Running blog: How was your weekend running?
Diets News