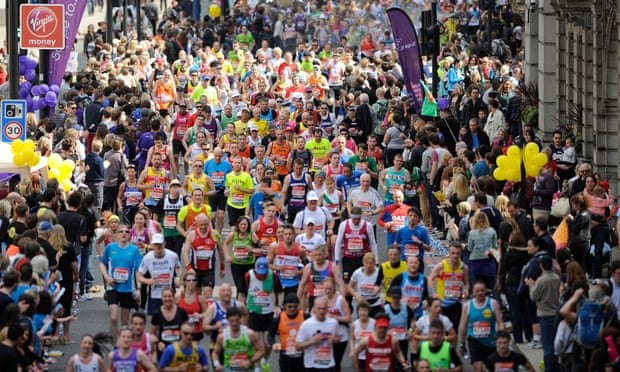 A few months ago, I reported the findings of research that showed that female marathon runners are better than men at maintaining their pace. Now Jens Jakob Andersen from Copenhagen Business School and runrepeat.com has done some new research, looking at the popularity of marathon running more generally and average finishing times across the world.

He created a database of more than 2m results, but then eliminated outliers such as elite runners, races that didn’t have enough results available and those that didn’t identify the nationality and gender of participants. All races with fewer than 10 male and 10 female participants for each year were also omitted. This left 1,298,588 results.

Despite the huge boom in mass participation running, his analysis shows that there’s actually been a slight decrease in marathon running here in the UK ( down 5%) – whereas globally it has increased by 13%. The biggest growth has been in Russia (300%), China (260%) and the Philippines (212%). The largest declines are in Switzerland (33%), Finland (29%) and Italy (23%).

In the UK, women’s participation in marathon races increased by 12%, but men’s decreased by 13%. Presumably that’s partly a rebalancing, or a move towards a more even gender split in races, as most races still see more men than women participating. Indeed though women’s participation globally is up 27% (men’s by 8%), on average women make up only 30% of marathoners. In many southern European nations women make up only around 10%. The UK is the ninth most gender equal nation (34%) and the US is number one (45%).

Bad news for the UK though (though perhaps again reflecting a much healthier gender balance of participants) – we are the second slowest nation in Europe. Only Greece is slower, and we’re seventh last globally. The slowest global nation is the Philippines (5hr 5min 13sec).

For those running on Sunday, some more research may be of interest. Strava looked at data from runners using their app or uploading their data to the site in 2014 and found firstly that “the wall” may come later than you think – the slowest mile for most Strava users was mile 25, whereas popular wisdom puts it in the low 20s. But also a cheering thought for older runners – with age comes wisdom, or at least speed: runners in the age group 40-49 have an average finish time of 3hr 43min 14sec, compared to 3hr 44min 47sec in the 20-29 age group .

And one final piece of research to report: run247.com has looked at every London Marathon since its inaugural running in 1981, in particular how many people have completed the course. The results show that over the years, the number of finishers has steadily increased – from 88.66% in 1981, creeping up through the 1990s and maintaining an impressive 97-98% since 1996. Last year 98.7% of people who left that Greenwich startline finished on the Mall. And it’s worth noting that weather makes precious little difference to the finishing rate (albeit that it may, of course, effect speed). The warmest years for the London marathon have been 1996 (21 degrees at midday) and 2007 (21.7 degrees at midday) and the finishing rates there were respectively 98.63% and 98.07%.

So whatever else you may worry about on Sunday – the odds are overwhelmingly in your favour that you will cross that line. Good luck.