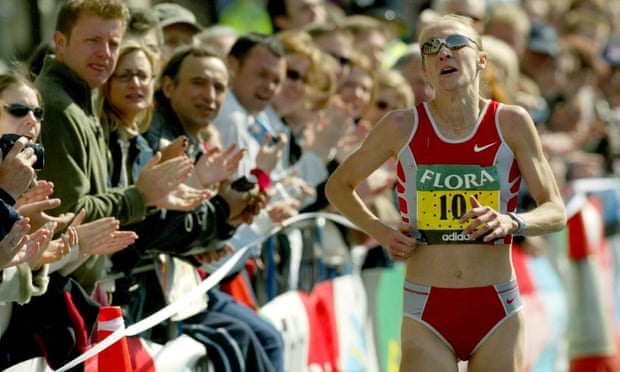 Sometimes in sport, an athlete does something so crazy and wonderful it causes you to reconsider the nature of the sport itself. On 13 April, 2003, Paula Radcliffe gave us such a moment, when she won the London Marathon in two hours, 15 minutes and 25 seconds. Her time was not only a massive world record, beating her own previous world record of 2:17:18, which she set the previous October in Chicago, but it moved her three minutes and 22 seconds ahead of the next fastest female marathoner in the world, Catherine Ndereba. In the professional marathon, in the modern era, that distance is not a gap: it’s a canyon.

Radcliffe’s 2003 London Marathon still baffles and thrills aficionados of athletics. At the time, Dave Bedford, the London race director and former 10,000m world champion, called it “the greatest distance-running performance I have seen in my lifetime, it ranks in my mind with the impact of Bob Beamon’s long jump in 1968.” But if anything, Radcliffe’s achievement has swollen since then. In the ensuing 12 years, no other woman has finished a marathon within three minutes of her world record. Radcliffe also continues to hold the three fastest women’s marathon times ever recorded.

For the past four years, I’ve been considering where the limits of the men’s marathon might lie. My book, Two Hours, is about the quest to reach one of the last great barriers in athletics: the sub-two-hour marathon. (The world record, held by Dennis Kimetto of Kenya, is 2.02.57.) But, throughout the writing of the book, it occurred to me that we might have already witnessed the equivalent of a sub-two marathon: Radcliffe’s 2003 world record.

This is not an original thought. Last year, Mike Joyner, a polymath from the Mayo Clinic in Minnesota, argued this point with vigour. (Joyner wrote the original 1991 paper on the feasibility of the first sub-two-hour marathon, in which, somewhat famously in academic circles, he posited an “ultimate” time for the men’s marathon of 1:57:58.) Last year’s paper for the Journal of Applied Physiology, co-authored by Joyner, Sandra Hunter and Andrew Jones, contended that the “sex difference” between men and women – the relatability of performance between the genders because of differences in body shape, heart size, lung capacity and so on – could be calculated at around 12% or 13%. Not co-incidentally, that percentage difference was what you got if you looked at the 100 best marathon times for men and women, but excluded Radcliffe’s three fastest times. In other words, the fourth best women’s marathon time would be roughly equivalent to the men’s world record now (2.02.57). The authors argued that the best women’s time – Radcliffe’s – is equivalent to a men’s 1:59.

How did a woman from Cheshire with a seemingly awkward gait destroy the world record in a sport dominated by East Africans?

One contentious and frequently cited aspect of her world record performance in London is that she ran the marathon alongside two men. Pacemakers can be important to fast times. For manifold reasons, it’s tiring to front-run alone. Pacers not only shoulder some of the psychological burden of pacing the race, they can physically shield an elite runner from the wind. Men pacing women is an ethical tangle, because male pacers with good personal bests can generally be more flexible than male pacers in men’s races, who must run flat-out. In an effort to untangle the rules, the International Association of Athletics Federations (IAAF) later brought in a clause for the women’s world record that it must be run in an “all-women” race, and Radcliffe’s record was rescinded for a period, before being reinstated.

In my mind, the pacers are a side issue. Almost all of the recent men’s world records have been paced. Haile Gebrselassie was occasionally shielded by a team of pacers, who surrounded him like a gaggle of migrating geese. Why shouldn’t Paula have received the same assistance? In fact, she says has always insisted that she raced the men who accompanied her, rather than using them in a traditional role as pacemakers.

It’s more interesting to look at how Radcliffe prepared. Her pain threshold was legendary. Gerard Hartmann, Radcliffe’s long-time physiotherapist, who lived with her for weeks at a time during training, told The Guardian in 2013: “I’ve worked with 63 Olympic medallists and there was nobody, from Haile Gebrselassie to Kelly Holmes, who on the treatment table could ever take that level of pain. She would hurt me rather than me hurt her. She would actually break me down because I’d have to go so deep into the sinews, I would have to ice my thumbs afterwards I was in such pain.”

Radcliffe, however, was no mere pain junkie. She was always working not just to be fitter, but to be better. One of the most instructive statistics about Radcliffe is that she improved her running economy by about 15% over the course of her career. Running economy is the measure of how much energy it takes to power an athlete down the road, and it’s one of the vital facets of one’s success or otherwise in elite distance running. Radcliffe may have looked ungainly, but she conditioned herself to be miserly with her fuel. In automotive terms, her miles-per-gallon ratio was exceptional.

The most important part of her body, however, was her head. I had a fascinating conversation with Radcliffe two years ago in which I asked her what time she had aimed to run the first half of the London Marathon of 2003. She told me she didn’t know. Her broad aim in marathons was to run a “negative” split – that is, to get faster in the second half. But, beyond that, she never chained herself to a schedule of splits throughout the race.

“I ran how I felt,” she said. “I had a mantra of ‘no limits’ throughout my career … So I never really ran to try and hit certain times at halfway, or whatever. The big thing was: Why would we set a limit? What if you felt better than that? What are you going to do? Slow down?”

This idea of ‘no limits’ sounds like common sense. But it is the very opposite of what happens in most marathons. I have sat in the meeting rooms of mid-range business hotels in Europe and America on the day before major races, as the organiser has set out his schedule of how fast the pacemakers will run the first half of a race, the first 30km, the first 35km. Two dozen elite East African runners with astonishing personal bests have nodded along. And, almost invariably, the plan has gone awry on race day – in large part, I always think, because most Kenyans and Ethiopians want to run as Radcliffe ran: on feel, not splits. Indeed, in Boston in 2011, when Geoffrey Mutai and Moses Mosop recorded what were then the two fastest marathons ever (2:03:02 and 2:03:06), Mutai says he had no idea how fast he was running, or what his split times were. He was just trucking.

Radcliffe’s legacy in the marathon is profound. 2:15:25 may not sound as sexy as 1:59:59, but it is just as earth-shattering a performance. In my view, it will be a decade before her record is broken. The performance has its own wisdom to impart, particularly in the men’s marathon, where the landmark two-hour marathon approaches. If the male elite have taken anything from Radcliffe, they will throw their stopwatches away and tattoo ‘no limits’ above their hearts.

Related posts:
09/30/2018 Fitness Comments Off on What was the secret of Paula Radcliffe’s exceptional London Marathon?
Diets News