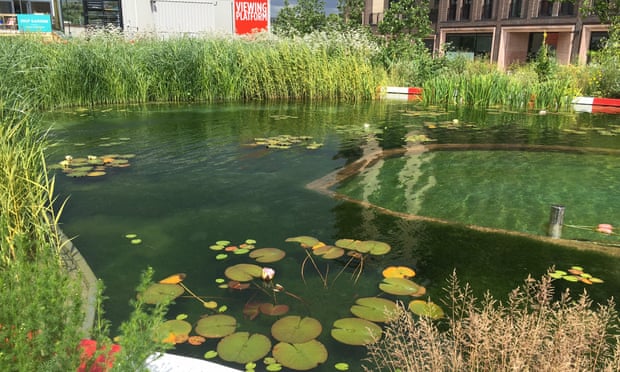 The Kings Cross Pond Club, which sidled on to London’s swimming scene at the start of 2015, capturing swimmers’ hearts, at the same time as becoming one of the city’s quirkiest tourist attractions, is to close.
Argent, the property developer that owns the land on which it sits, has taken the decision to close the pond. Although it was only ever intended to be temporary – and only has planning permission to last two years – pond users are aghast.
Over its short life, the pond has grown in popularity and has served more than 20,000 swimmers since it opened in May of last year. It serves the local community as a different and offbeat recreational facility, and attracts curious tourists. In addition, it is loved by outdoor and “wild” swimmers, who travel from far and wide to experience swimming in a naturally filtered fresh-water pool situated in a built-up area. A campaign, made up of a diverse group of pond users, has started to try to convince Argent, and local council Camden, to rethink its imminent closure. Imogen, who started a petition to save the pond and lived in Kings Cross in the 1980s until moving to East Anglia, says: “Swimming in the pond has drawn me back to Kings Cross.” Dr Chris is an academic, swimmer and TV presenter who has a keen interest in examining the effects of swimming in cold water on improving physical and mental health. He says: “The benefits of the pond are so wide-ranging in terms of the health of both the users and the area, that to dismantle it would be a tragedy.”

Ben, a young professional, is on the local tenants and resident’s association and lives so close to the pond he can stroll home from a swim still wet. Emphasising the community-building aspect of the pond, he says initiatives such as the pond “create a sense of place and ensure that, more often than not, residents have close friends across the development and know their neighbours”. And Barbara, a lawyer, has swum in the pond more than 100 times since it opened.For those of us involved in trying to keep the pond open, and for all who swim there, the facility has exceeded our expectations. It started out as a living art installation about the way man and nature can coexist. It means different things to different people, but has become so much more than art: in turns a tourist attraction; a solace; a way of coping with life; a way of experiencing nature at close quarters; an antidote to the grey and drab; a slowing down of the hurried pace of living in the city; an asset to its community; a short sharp shock in the middle of winter; a way of meeting new friends; a reason for being in the city.

The pond has come to represent a wild yet tranquil haven, which seems to stand proud holding an ever-growing urban sprawl at bay. And we, and several thousand more people, don’t want it to close.

Related posts:
09/30/2018 Fitness Comments Off on Kings Cross Pond Club: is this the end for city-centre wild swimming?
Diets News