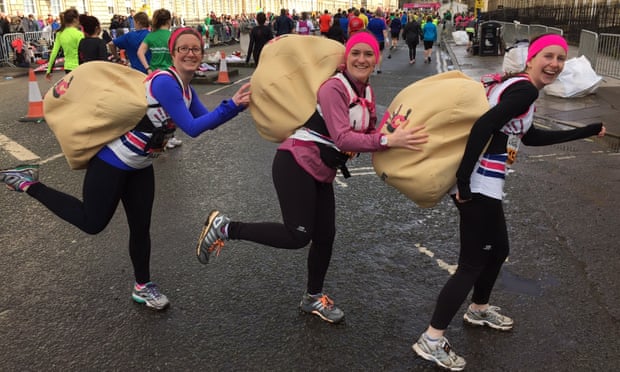 What’s the one thing all people who laugh at runners have in common? They’re the ones walking. And not in Lycra after a good workout!

Truth is, I’m used to people laughing at me when I run. And I really wish I wasn’t.

I’ll admit it. I’m not going to end up in a catalogue as a poster girl for the sport any time soon (although I do have great purple trainers with fluorescent laces).

My right foot turns in. My short hair goes wild in the wind. I have perfected the “girl dragged through hedge” look, which starts about five minutes in. I plod. I don’t run hard. And I can often be seen swinging my arms like a windmill.

Put it this way: one look at me in full flow wouldn’t inspire anyone to dust off their trainers and give it a go.

But here are a few reasons why it should – or at least get you staring at compression tights online. Let me explain my rather odd running action.

First, my foot turns in because I have hip dysplasia. Eleven years ago, I couldn’t dance at my friends’ weddings. I couldn’t dash for the bus. I couldn’t stand in a bar and chat like other people in their 20s. Every step on the commute to work was really, really hard.

Then, eight years ago, when I was 24, I had my pelvis sawn in three and pinned back together again (otherwise known as a PAO, or periacetabular osteotomy) with four long metal rods. I had to learn to walk again. I had to tell my brain that it wouldn’t hurt to take a step. When I was sat in a wheelchair back then, I never thought I would be able to run – let alone run three times a week.

So, why was it that I decided to buy my first pair of running trainers in 2014, you ask? The answer: breast cancer.

I started running because I didn’t want to gain three stone during chemotherapy treatment last year.

I started running because I wanted a reason to get out of bed and into the fresh air when times were dark.

I started running because I wanted to show cancer that it could take a lot of things – my hair, my right boob, my tummy fat (to create the new boob) and my dignity – but it would never take my smile.

I started running because I needed to keep moving forward.

That’s why, during chemo, I did my first 10K (complete with bald head, Picc line – a catheter that went in at my arm to my heart – and emergency acute oncology card) for Breast Cancer Care. That’s why I celebrated the end of active treatment by running another (and quicker) 10K in a giant boob for CoppaFeel. That’s why I ran the Bath half marathon in March and walked 20 miles through the night (at a pace not dissimilar to my running speed) this July. And that’s why I’m signed up for the London marathon next year.

Running is my world. And I’m still just a beginner.

The short hair may look wild, but I’m just grateful it’s there. The arm swinging may look strange, but it’s to help me avoid getting lymphoedema in my right arm (a permanent swelling that is linked to surgery for breast cancer). Every day I run, I risk ending up with an injury that will take me out of the race for ever. Every day I run, I don’t know whether I’ll come back in one piece. But the feeling I get when I do is the best feeling in the world.

I want more than anything to be standing on that marathon starting line in April next year. I just wish people didn’t laugh at my attempts to go the distance.

And then buy yourself some trainers to see what all the fuss is about.

You may never look back.

Related posts:
09/30/2018 Fitness Comments Off on I’m used to people laughing as I run – but do they ever wonder why I look so awkward?
Diets News