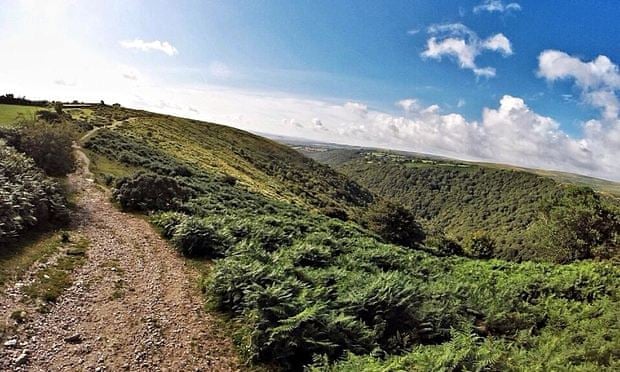 I run. A bit. Well, actually I run quite a lot, just sporadically. I’m a binge runner. These excessive indulgences where I lapse into a semi-permanent state of sweat-wicking material and a running visor almost always coincide with a grand plan of some sort.

The most enjoyment I get from running comes from seeing a route, planning the logistics and completing it, but that initial catalyst could come from a variety of sources – a photo, a flick through event listings, a “fancy this?” email from a friend or simply by looking at a map. And that’s how this one started, with a map. My new plan is run from coast to coast across Devon: 120 miles in all.

It’s not lost on me how fortunate I am to have grown up in Devon: its rolling fields, stark moorland and rugged coastlines are a great playground for those who like to be outdoors. And there, right through the heart of it, linking all that makes Devon beautiful, is this route. Initially the coast path, then the Two Moors Way, some country lanes and finishing back on the coast path. This challenge first gave me a little poke about three years ago when a dashed green line, one that I’d seen and walked along many times, jumped out at me from an OS map. Ever since I first quietly mentioned to my wife that I wanted to try running all 120-miles non-stop across two Moors and from coast to coast, my excitement has been building. Now, with just over a month until I take my first steps, it has fully consumed me. It’s there when I go to sleep, like when you see a fork of lightning and then you can still see it when you close your eyes. This little wiggly line, running north to south across Devon, is burned on to my retinas.

And then there are the demons, quietly nibbling away at me. What if I simply can’t do it? What if it’s just too far? What if I get ill? What if I twist an ankle and get injured? What if I get chased by a bull through one of the many fields? And the more people who know about the challenge, the more the pressure mounts. Yet the motivation of not being a disappointment is huge. If I aim for 32 hours and end up taking 50 then so be it. Every step forward is one further from the start and one closer to the finish, but by no means is this a solo effort. Yes, I’m the one running all the way, but there’s a team, without whom this just wouldn’t be possible. And therein lies the greatest satisfaction – the support, the camaraderie, the help, the involvement and the morale boost of doing this with your friends and family. The support could be via a donation to my chosen charity (The Devon Air Ambulance), it could be handing me a hot drink in the middle of the night as I cross Dartmoor or it could be running alongside me and keeping me company on the trail.

Somewhere I once saw a cheesy line, possibly typed in a hipster font on a slightly desaturated photo of a runner breaking out into the sunset on a mountain trail, along the lines of: “if you don’t have a go at what scares you, you’ll never achieve anything.” It’s one of the few to have stuck. Everyone has their own Everest. It could be your first 5k, your first trail run or your first marathon – the important part is the word “first”. Stepping over the start line and breaking out into the unknown, having a go. Whatever your ability, just having a goal on the horizon is incredibly motivating. There are thousands of races each year in Britain, which is great, but there are rewards to be had off the beaten track as well, so keep a decent stock of maps handy and get your mates involved.

@RossLovell has raced some of the world’s iconic events, from the eight-day Cape Epic mountain bike race in South Africa to The North Face 100 trail run in the Australian Blue Mountains. More recently he has turned to organizing his own challenges – you can follow his latest effort at lighthouse2lookout.co.uk.

Related posts:
09/30/2018 Fitness Comments Off on Why I am running 120 miles across Devon
Diets News