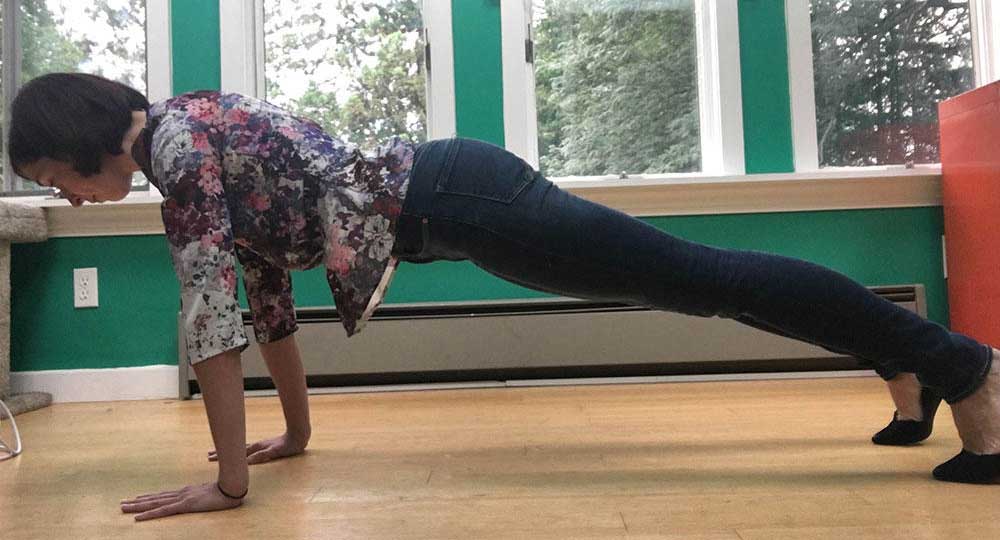 Confession: I usually eat lunch at my desk. I know it’s bad for my health (and my keyboard), but sometimes I just want to close my office door and listen to Spotify while scarfing my green curry and veggies. Outside of work I’m constantly on the move—I run every morning—but between 9 a.m. and 5 p.m., I’m a bit of a shut-in. Aside from coffee and bathroom breaks, I’m notoriously desk-bound.

At my last job, a coworker suggested our entire row of cubicles schedule twice daily “plank breaks” in the morning and afternoon to re-energize. For two days, we all diligently heeded our reminder notifications, got out of our desk chairs, and dropped into plank position for one minute. But by day three we were all clicking “ignore” and working through them.

Fast forward to a couple of months ago as I paired yet another packed lunch with Twitter. Feeling guilty, I wondered if I should revive the plank break to offset my sedentary lunchtime. So I pitched this story, set daily reminders for 10:45 a.m. and 3:45 p.m., and vowed to hold plank position for one minute and 30 seconds each time that pesky alarm sounded. Here’s how it went.

I felt super self-conscious at first.

Even though I had the luxury of closing an office door rather than planking in public, I was paranoid that a co-worker would walk past, see my feet sticking out from behind my desk, and rush in to see what the heck was going on. I imagine it’d be a little awkward to explain, “Oh don’t mind me, just planking!” Especially since I’m new here. Luckily nobody seemed to notice—or they just accepted that I was somewhat eccentric.

I learned the value of a minute.

As a regular yoga-doer (bring on the chaturangas!) I thought a minute and a half holding plank was going to be easy-peasy. Boy, was I over-confident. When I did them right, my core quaked, and I’d look desperately at the timer on my iPhone as it counted down to zero—a.k.a. plank freedom. I considered cutting my breaks to one even minute, but I’m not one to back away from a challenge, so I stuck with my original goal ’til the bitter end.

I finally focused on form—and learned how to mix things up.

I’m still far from perfect plank position, but trying to take photos for this experiment pointed out the flaws in my form: an arched back, dropped hips, a craned neck, rounded shoulders, all the usual suspects. With each workday, I strived to improve. Of course, the basic plank or forearm planks got boring day after day, so I spiced things up with side or raised leg planks. Jillian Michaels would be so proud.

It’s in my nature—I’m a three-snoozes-a-morning kind of girl—and I found myself doing the same thing when notifications popped up on my computer screen during work. Sometimes I’d delay the plank break to finish a task, but oftentimes I was just dragging my feet because that’s what I do. But whenever I finally got out of my seat and down on two hands, I always felt better afterward.

I found a plank buddy.

Remember that whole dragging my feet thing? It was so much easier to stay motivated when a coworker dropped by to join me. I got into the habit of inviting a friend for one of my sessions each day, and it was fun using that time to dissect character development in Stranger Things or catch up on what we each did over the weekend. Plus, it was nice to know that I wasn’t struggling through this alone.

I’m a running, hiking, biking sort, which is why you’ll rarely see me in the gym working out. Holding a stationary pose often bored me, and I found myself wishing I’d signed up for jumping jack breaks instead. Sometimes I’d do mountain climbers from plank pose when I was feeling antsy.

I felt re-energized and stronger.

As I ended each plank break with a good stretch in downward-facing dog, I could literally feel all that tension from sitting in my desk chair release. I was surprised by the jolt of energy I felt from such a short spurt of physical exertion, and it inspired me to move around more in other small ways, like taking trips to a bathroom on another floor or doubling my coffee breaks (oops). Not only that, but my abs strengthened. I didn’t quite realize it until the final week, when my plank hold felt considerably easier than during week one. Though I didn’t see a difference, I could feel it.

I might not continue daily plank breaks, but this exercise in willpower has inspired me to do something, anything, more often throughout the workday. Yesterday I did 10 jumping jacks when I was feeling restless, and sometimes I’ll shut my office door now to cycle through a sun salutation or two. When I’m done feeling so over-planked, I might even just drop down and give another minute-thirty.

This article was originally published by Prevention magazine.

Ready for a challenge? Get your fittest body yet in 18 minutes with All in 18, the new program created by Women’s Health international fitness expert Idalis Velazquez. Sign up today!

Related posts:
07/02/2018 Fitness Comments Off on I Took Plank Breaks At Work Every Day For A Month—This Is What Happened
Diets News