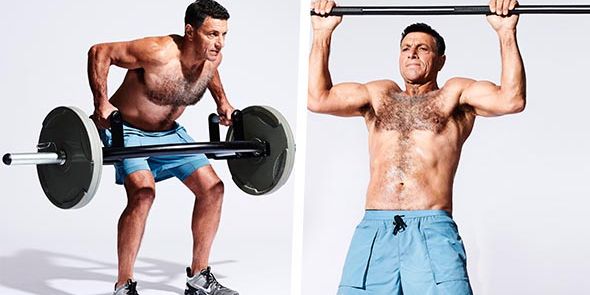 We interrupt our regular roster of athletes to shine a well-deserved spotlight on one of our readers. As is immediately obvious, at 63, Mr Depiano isn’t your average Joe. Our hope is that his drive will inspire you to kick-start your weight loss ambitions. It certainly worked for us.

Fitness didn’t come to him naturally. “I was the fat boy at school,” says Depiano. “I was told to try something else, not PE.” He didn’t listen and, within six months, he made the running team. “That was my first lightbulb moment: I realized that success requires hard work,” he says.

But tales of school sporting glory are nothing unique—it’s the longevity of his fitness that serves as inspiration. It’s what can turn the boom and bust of your January weight-loss regimen into a lifelong pursuit.

“The key to my long-term success is reinvention,” says Depiano. “I need to engage with fitness mentally to stay motivated.” Repetitive sets tend to get, well, repetitive after half a century.

Depiano’s mental and physical appetite for new challenges saw him become a karate black belt and compete nationally in the UK’s Ultra-Fit Championships. Designed as a test for the Royal Marines, competitors are challenged in 10 disciplines, including cardio, lifting and plyometrics. Think of it as proto-CrossFit. But as age moved the goalposts, Depiano adapted. Karate was replaced by yoga, strength training by endurance—an ability that can be improved long after muscles weaken.

“My goal is to achieve a 40-minute 10K. I’m currently at 42,” says Depiano. “The key is to always have a goal: If you don’t hit it, move on. It’s not a failure.” To him, exercise is a reward: “It makes you feel younger, happier and able to tackle anything.” In Depiano, fat and Father Time have met their match. Now, begin your own lasting legacy.

Related posts:
05/12/2020 Fitness Comments Off on How This Guy Got Into the Best Shape of His Life at 63
Diets News