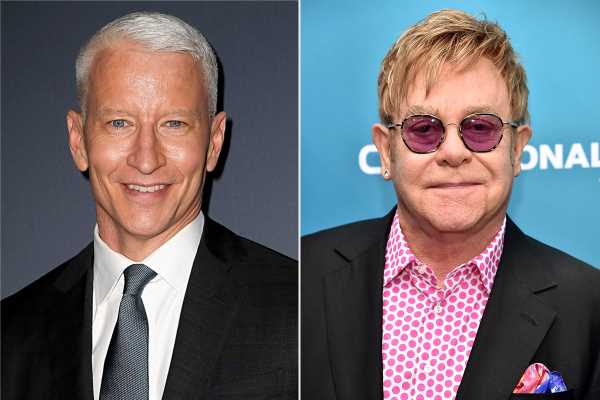 Anderson Cooper has received a slew of support since welcoming son Wyatt Morgan two weeks ago — even from some that took him by (pleasant) surprise.

On Monday's episode of his good friend Andy Cohen's Radio Andy SiriusXM show, the CNN anchor revealed that he had gotten an unexpected call from a music legend after his son's birth.

"People called me whom I've never talked to on the phone, really sweet and reaching out," said Cooper, 52. "I got a call from Elton John. … I've interviewed him and stuff over the years."

"Was he welcoming you, officially, to the Gay Dads Club?" quipped Cohen, 51, sharing that the "Tiny Dancer" hitmaker, 73, had sent his own son Benjamin Allen, now 15 months, Gucci duds after his birth in February 2019.

"I guess so!" Cooper answered, going on to say of John (who is dad to sons Elijah Joseph Daniel, 7, and Zachary Jackson Levon, 9), "He's paved the way in a lot of different ways. It was lovely. It was really cool." One week after Wyatt's birth, Cooper told Stephen Colbert that he was eschewing paternity leave given the nature of his career amid the ongoing coronavirus (COVID-19) pandemic.

"This is not some story — this is life and death. This is as serious as it gets, and it's more important than ever before that things be true and accurate," he said on May 4. "It's one of the reasons I'm not taking time off."

"Thankfully I can do some work from home, but I feel like this is an extraordinary time to be in this business as a reporter and to be able to try to help inform people and give people facts," he added. "Right now, facts and science and truth — it is the difference between life and death for many people."