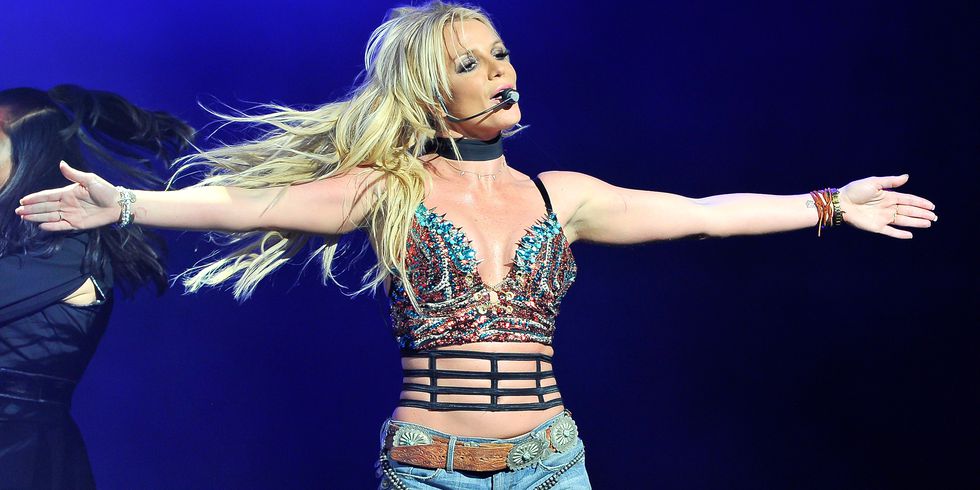 Oops, she did it AGAIN.

In preparation for her upcoming tour — Piece of Me, which will take her to 18 national and international destinations — Britney Spears is back in the gym and giving her Instagram followers a sneak peek of her new fitness regimen.

“Switching up my workout routine in the gym as I get ready for my #PieceOfMe tour,” the singer captioned the video. Apparently, “switching up” means adding in butt exercises, and lots of them (with a some extra core work, of course).

Brit’s been posting a lot of gym content these days, especially during her wildly successful Britney: Piece of Me Las Vegas residency. With all the complicated acrobatics involved on-stage, the 36-year-old clearly doesn’t skimp on gym time—although she did take a brief hiatus in January, telling her Instagram fans that “overdoing anything just isn’t good.”

But as she told Women’s Health in 2015, having two sons made it even more important to her to maintain a fitness routine: “After I had Jayden [her second son], it was real easy for me to get back in shape. But five years later, I started noticing changes in my body. My hips are a little bit wider because I’ve had kids. So it was crucial for me to be continuous with my exercise. Consistency is key.”

I love cardio and sweating, but over doing anything just isn’t good. It’s been nice working out a little less these last few weeks and enjoying my time off with my children!!!!

And when it comes to fitness, Britney is nothing if not consistent. Typically clad in a sports bra or comparably small top and tiny shorts, she regularly shows off her skills on Instagram. In a February video, the “Toxic” songstress showcased her talent for backbends and casual splits.

In a September video, she executes a string of back handsprings.

Fun day yesterday at gymnastics! So excited to hear the Olympics are coming to LA in 2028… already getting in the spirit ???

Followers can also count on her to post motivating selfies, displaying her totally fire abs.

It’s pretty refreshing to see how candid Britney is about how she works hard to keep her body in peak dance condition. She’s not like a regular mum, she’s a cool mum.

This article originally appeared in Women’s Health US.

Related posts:
07/02/2018 Fitness Comments Off on Britney Spears Is Serving Up Major #Fitspo With Her Latest Workout Routine
Diets News