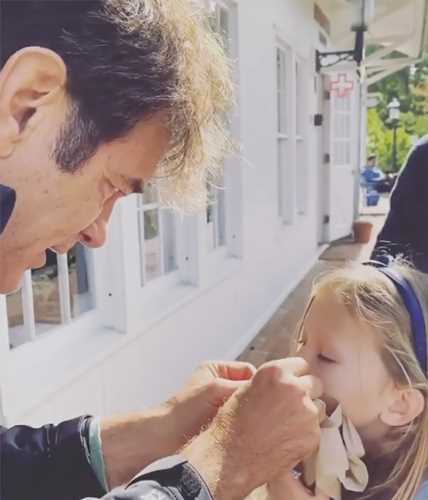 Dr. Mehmet Oz to the rescue!

On Sunday, the host of The Dr. Oz Show, 59, shared an Instagram video of him helping 6-year-old Carmen Baldwin take out her tooth as her mother Hilaria Baldwin watched the whole thing go down.

In the video, Hilaria, 35, stood beside her eldest child, whom she shares with husband Alec, as Dr. Oz used a string to rip out the young girl’s tooth. After the TV host successfully did so, he gave a napkin to Carmen to bite down on, while Hilaria, who appeared grossed out, looked away in the other direction.

“Carmen, you’re so brave. Everybody clap for Carmen!” family members said in the background as they cheered for Carmen, who barely flinched during the whole encounter.

In his Instagram caption, Dr. Oz joked that “a doctor is always on call,” and explained that Alec, 61, was not in the video because “he’s not one for the sight of blood.”

“I used a string to eject the tooth (it keeps the child from accidentally swallowing the tooth…and beats the old string and door trick),” he wrote. “I’m curious about your best tactics for removing baby teeth. An apple? Weeks of wiggling? Just let them fall out? And dare I ask what the going rate is for the Tooth Fairy? (My guess is a few bucks).”

Hilaria also shared the video of Dr. Oz taking out her daughter’s tooth, writing, “Tooth number 2 is out! I don’t know if I would be brave enough to pull it out😱!!”

The parents are currently expecting their fifth child together, and on Saturday, they revealed the sex of their family’s new addition: a girl!

In an Instagram video, Hilaria shared, each of their kids held a baby doll wrapped up in white blankets as they were instructed to look at the color of clothing their doll was wearing.

“Our little reveal 💙💖. We are so excited!” the mom-to-be captioned.

The actor and his wife last did a sex-reveal via cake with the help of Leo, Rafael and Carmen to find out that they would be getting a brother. (Romeo was born in May 2018.)

This time around, Carmen was really gunning for a little sister. While the Baldwins thought about no longer conceiving after Romeo, Hilaria has made a few comments about her daughter’s desire for another sister, after dealing with three younger brothers.

“She was a little bit disappointed. [She said,] ‘How about you have a girl first, then you can have another boy?’ I was like, ‘It doesn’t work that way!’ ” The Living Clearly Method author told PEOPLE in November 2017. “She’s like, ‘No, you don’t understand, Mommy. It’s going to be a girl.’ I was like, ‘No, I promise. I promise you it’s a boy.’ “

Despite already having an older sister in Ireland, Hilaria told PEOPLE of Carmen, “She is committed to a fifth child.”

The fifth-time mom-to-be shared last month alongside an Instagram video of the baby’s heartbeat that she and her husband are expecting again, not long after he teased that they were planning another pregnancy.

The spouses’ joyful news comes after the Mom Brain podcast co-host revealed in the spring that she had suffered a miscarriage and undergone a subsequent dilation & curettage surgery.