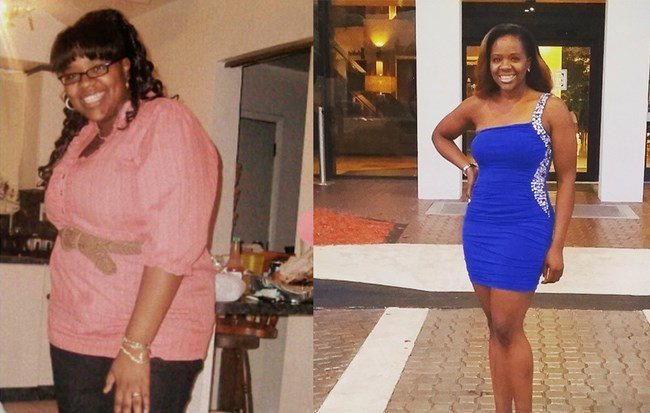 In high school, I was always fit and active because of my busy sports schedule. That all changed in my twenties when I got married and became a mum. Like many women, I stopped putting myself first and my healthy eating and exercise habits were thrown out the window. After the birth of my second child, the weight really started to pile on and I hit my highest weight of 120kg. I ended up with high blood pressure and was put on two daily medications. At this point, I wasn’t paying any attention to what I ate — my meals consisted mostly of meat and carbs, and portion control was the furthest thing from my mind. I was just trying to get through the day.

About five years ago, I realised I couldn’t keep up with my kids anymore because I was always tired. That really lit a fire under me to make a serious change. Initially, I didn’t even set out to lose the 45 kilograms — I just wanted to get off the blood-pressure medication. My doctor told me that if I started losing weight, the problem would resolve itself, so that was my first goal. Once the weight started falling off, I became motivated to keep going and make new goals.

At first, I concentrated on making small diet changes like swapping white rice for brown rice and measuring out portions. Another small goal I had was sticking to a low-sodium diet, keeping my intake below 1,500 milligrams (mg) a day. MyFitnessPal has also been a great tool in this journey — I use it to track my meals and make sure I eat between 1,500 and 1,700 calories a day.

A typical day of eating for me now starts with oatmeal and turkey sausage, or a protein shake if I’m in a rush. For lunch and dinner, I stick to a pretty consistent protein-carb-vegetable formula. I have 120 – 170 grams of turkey or chicken, half a cup of rice, and pair it with broccoli or a salad. For snacks, I like to keep fresh fruit and nuts on hand. I generally stick to this way of eating Monday through Thursday and am more relaxed on the weekends. If my kids want to get pizza, we’ll do that, but I make sure to only have two slices and drink lots of water, whereas before I’d down three to four slices without thinking. After a year and a half of eating like this, I lost 45kg.

At my heaviest, I purchased at-home workouts as well as an elliptical because I thought I was too heavy to justify buying a gym membership. I did some form of exercise at home for an hour every day. A couple months later, after losing 9kg, I signed up for a gym and did daily workout classes as well as workouts on my own there.

In the five years since I started this journey, I’ve done just about every workout out there — Zumba, yoga, CrossFit, boot camp, run club, and now, I even teach spin on the the weekends. For me, the key to staying active has been mixing up my workouts so that I’m always having fun and meeting a new challenge. That’s also been what’s helped me see results. For instance, I hit a plateau after losing around 18kg. The key to pushing past that for me was creating new goals around long-distance running. I started with the goal to run a 5K back then, and I just completed my first full marathon last January.

When I feel unmotivated, I utilise a lot of Post-It notes. If you go into my closet, they’re everywhere, filled with motivational quotes. I also do fitness vision boards. When I put pen to paper and map out what I want to accomplish, it makes me feel that much more capable of making it happen.

The biggest reward for me has been the improvement in my overall health — that was the original goal in the first place. That reward also serves as a great reminder to keep going. I’m improving my health every day for my kids, but interestingly, that requires me to put myself first sometimes. That was a major hurdle for me at first—as moms and wives, we’re so conditioned to put everyone else first that there’s nothing left for ourselves at the end of the day. Now, by taking care of myself, I’m able to care of my family and inspire others to do the same.

Keep going and never give up. There’s so much going on in this life, but if you can take just five to 10 minutes for yourself to do a quick workout, it’s worth it. If you make those small changes over time, they’ll lead to a greater lifestyle change.