Adam Krieger had always been a bigger kid—he played lineman in football, and wrestled in high school. For the latter, especially, he had to keep in shape, often cutting or gaining weight. But once he graduated, he stopped training; he also didn’t like the college initially, and in his unhappiness he took to binge-eating. He describes himself as the “trash can” for friends to dump their unfinished food.

Now back in school and reflecting on when things changed, the 22-year-old from Tarrytown, New York, says it took a Facebook ad to spur him to action. “At my heaviest I was around 355 pounds,” he says. “I was a bowling ball that could not sit comfortably in a movie theatre, stadium, or even just a regular desk.” He was unhappy and hard to be around; he felt aimless.

Then, while waiting in the drive-thru line at McDonald’s, he happened upon a Facebook ad for Gymguyz, which brings personal trainers to your home to build a customized workout. He reached out to his local franchise, eager to get started.

His trainer showed up and quickly devised a meal plan. Krieger was used to Italian meals; his new plan meant cutting back on pasta and carbs. He began eating meals every three hours, with greater portion control than he was used to. He also worked out at home, two or three mornings a week, with his trainer. He started with bodyweight exercises, ripping through lunges, squats, and pushups, and went to the gym on his own.

He’d set a goal of losing 100 pounds. In just over 4 months, he’d done it, hitting 247 pounds. “I was stoked,” he says. “I wanted to prove to everyone and to myself that I was capable of losing the weight and getting my life back on track.”

Krieger’s friends were mostly away at college while he was working out, so it was a big shock for them to see him more than 100 pounds slimmer. His parents were a great support; his mom had lost 125 pounds a little over a year before, which motivated him to keep going. 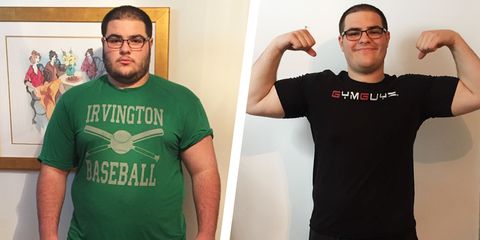 “The best side effect that came out of it was I broke my mini depression skid and decided to go back to school,” he says. Living with his family, working out in the basement, he found a new school he could attend, even joining the wrestling team. He’s now looking forward to graduating from college.

He admits it took him some time to find the right path. Even after he’d started training, he sometimes didn’t want to wake up and workout in the morning. But he kept at it. “One day at a time,” he says. “Make the right choice today—and most importantly do this for yourself. These changes are for you and nobody else.”