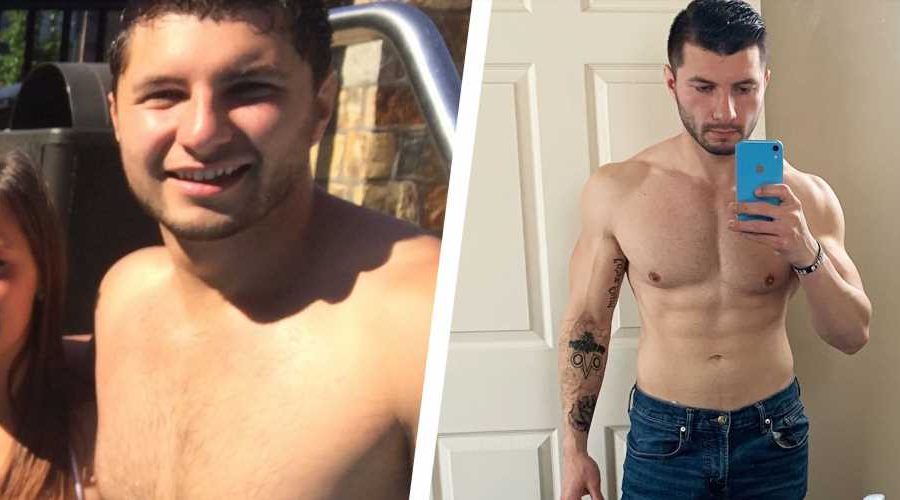 Cameron Castellanos thought he was going to die. At the end of a fun day on a houseboat with his then-girlfriend and her family, he’d decided to make one last jump into the water. He’d hesitated, because he wasn’t a great swimmer, but took the plunge anyway. Then he found himself swept away by the current, fifty feet away from the boat, struggling to stay afloat. He choked on water, saw spots, and finally blacked out.

“I remember thinking about the mistakes I had made and the things I wished I’d done differently,” Castellanos, now 26 and a sales rep in Las Vegas, Nevada, says. After his rescue—and after coughing up a lot of water—he realized one thing he wanted to change: How he took care of his body.

Castellanos had wrestled and played football in high school, so he was used to gaining and dropping weight—he’d lose as much as 30 pounds to wrestle. “Those weight cuts were extremely difficult to make but it taught me a lot of discipline and showed me what the human body could endure,” he says. But when he went to college, he joined a frat with a live-in chef; on top of regular drinking, he ate plenty of unhealthy food. Even with regular exercise, he gained 40 pounds. Eventually he could no longer convince himself he was just big and swole. “I thought to myself, ‘I’m only 22 and on the fast track to being the person I’d never thought I’d become,’” he says.

Nearly drowning forced him to decide who he was going to become. First, he had to fix his diet. He’d been eating like a football player doing two-a-day practices, but without ever burning off all those extra calories. Simply cutting back on food helped him lose weight, and as he learned more, he started tracking calories and macros. He settled into consuming 1,6000 calories a day, 35 percent protein, 35 percent fat, and 30 percent carbohydrates.

He also tweaked his workout, which had mainly focused on lifting. He started doing a push-pull-legs (PPL) routine twice a week, along with 10 minutes of ab work a day. “I remember my dad telling me that because of our “genetics” we could never have a six pack,” he says. “I wanted a six pack and was going to do whatever it took.”

He took a lot of motivation from YouTube fitness personalities such as Calum Von Moger, Steve Cook, and Christian Guzman. In about 18 months, he went from 220 pounds down to 165. “I couldn’t believe the results I had gotten,” he says, “What I thought was impossible became possible.”

He’s thrilled with his new physique, and still looking for his next challenge—mixed martial arts might be next on his agenda. He’s open to new ideas; after all, he went from thinking if he didn’t eat three meals a day his muscles would fall off, to today practicing intermittent fasting because it makes him feel so good. That, he says, is his biggest piece of advice when it comes to fitness: “Be open minded and receptive.”

Related posts:
09/05/2019 Diet & Food Comments Off on A Near Death Scare Motivated This Guy to Lose 50 Pounds and Get Ripped
Diets News