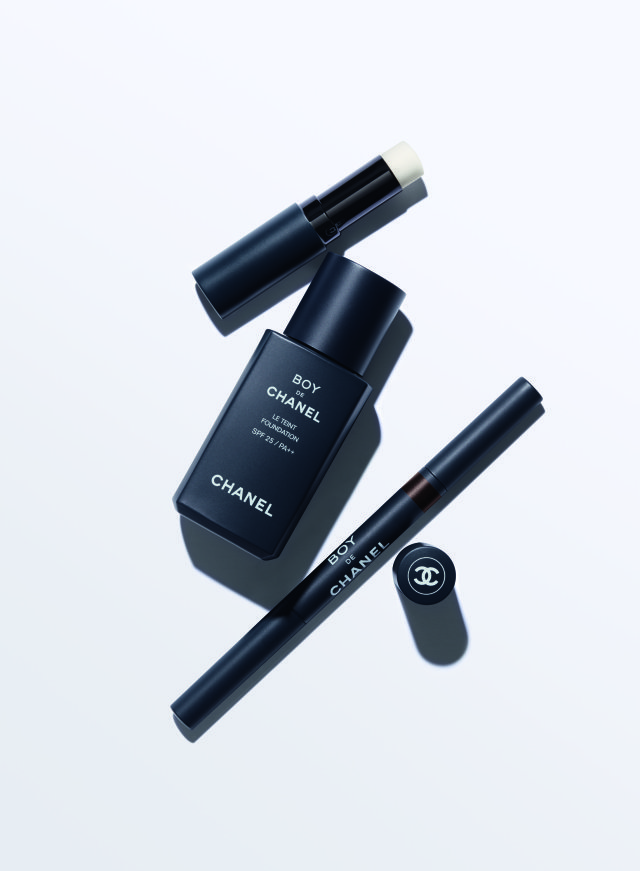 PARIS – Chanel is the latest brand to dive into the swelling men’s makeup market.
The French house said on Monday that it will introduce its first color cosmetics line for guys, a three-product range, starting in South Korea on Sept. 1.
The collection includes a tinted fluid, coming in four shades; a matte moisturizing lip balm, and an eyebrow pencil in four colors.
Boy de Chanel makeup will then be rolled out to the rest of the world in November on the house’s e-commerce platforms. And from January, it will be available in Chanel boutiques.
Chanel’s Boy franchise, which already counts products such as handbags and a perfume, is named after Boy Capel, the lover and muse of Gabrielle Chanel.
“Just as Gabrielle Chanel borrowed elements from the men’s wardrobe to dress women, Chanel draws inspiration from the women’s world to write the vocabulary of a new personal aesthetic for men,” the company said in a statement. “Lines, colors, attitudes, gestures…There is no absolutely feminine or masculine prerequisite: Style alone defines the person we wish to be."
Chanel executives could not be reached for further comment on Monday.
Although the brand does carry some products for men — including scents, such as Bleu de Chanel and Egoïste; skin care; and a smattering of fashion items — Chanel is primarily female-focused. Still, the world is changing, with much of what used to be considered gender-bending now flowing swiftly into the mainstream, and makeup for guys is no exception. Brands are taking note.
“The Korean market is one of the most interesting as far as concerned because they have a relation to beauty that is different,” said Leïla Rochet Podvin, founder and chief executive officer of Paris-based trends and consulting agency Cosmetics Inspiration & Creation.
Their open-mindedness makes South Korea’s men’s grooming market the largest in the world, with retail sales hitting $1.05 billion in 2017, according to Euromonitor International statistics.
“On a broader perspective, internationally, the male market is changing because of the influx of the younger, Millennial generation,” Rochet Podvin continued, adding that age group loves transformation.
Alex Dalley, founder of MMUK Man, the U.K.-based men’s makeup and skin-care brand and e-tailer, agreed that social media, like Instagram, has caused many to feel they must put their best face forward. And that has helped spur the trend in men’s makeup and beauty products.
After launching his brand in 2011, with about six products and marketing skewed toward the male gay community, MMUK Man has grown to more than 40 products purchased by a wide demographic. Foundations are the label’s bestsellers, followed by concealers, mascara (dubbed “Manscara”), beard filler, BB cream and anti-shine powders.
Thanks to the growing demand, MMUK Man is also expanding its European reach, with distribution centers and local online platforms starting up in France, Germany, the Czech Republic and Slovakia on Oct. 1.
Asos.com is catering to the budding men’s makeup market, as well. Last September, the online retailer changed how products are filtered. So now, for instance, via the men’s section it is possible to access the Face + Body category, where items for guys are found and each product listed in Asos’ Face + Body category for women filters through, too.
“So many retailers and many brands have suggested for so long that if you’re a guy you’re probably not going to be shopping for face products, and you’re probably not going to be shopping a purple glitter eye. But actually, we’ve moved on, we’ve evolved — and that’s not the case,” an Asos spokeswoman said.
Asos is hitting the labs, too. “We’re in the process of creating a skin-care and cosmetics line, which is coming out in Q1 of next year, and it will be a genderless range as a whole,” said the spokeswoman.
Some mavericks dipped into the men’s makeup market well before today, with limited success. Jean Paul Gaultier was one. He famously plunged into the category in 2003, with the Le Male Tout Beau Tout Propre line, which included eyeliner, bronzing powder and roll-on lip gloss.
Four years later, that was discontinued and replaced with a range called Monsieur, which had color cosmetics and skin-care products for men.
Source: Read Full Article