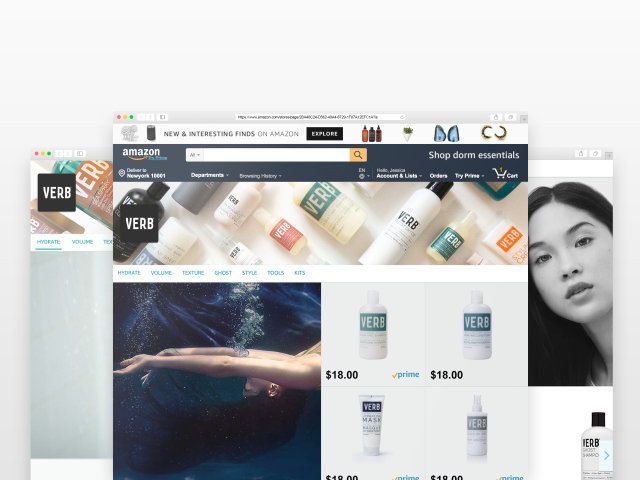 As of Aug. 3, prestige hair-care brand Verb launched on Amazon.
For a brand that's also sold through the salon channel, Urban Outfitters, Revolve and Sephora, an Amazon launch is a big deal, as the online giant is sometimes viewed as a threat. But for Verb, the Amazon question was more "when and how" rather than "if," according to founding member Claire Moses.
Plus, when Verb tracked down the amount of its products that were selling through 38 unauthorized sellers on the Amazon platform, the brand decided that "when" needed to be now.
"We're doing this now, before it gets too unmanageable," Moses said. Year-to-date, Verb estimates that $1.8 million in product has been sold through third-party sellers on Amazon — and it's not always showing up in mint condition, something that could wind up damaging brand equity. "The customer thinks they're buying from Verb," Moses added.
"The whole campaign behind what we're doing here is, 'Buy real, buy safe, buy from Verb,'" Moses said. "In order to do that, we have to take 10 steps back and actually talk about Amazon, which we're finding no one is really doing."
Over a period of 18 months, Verb carefully orchestrated its Amazon launch, starting with research and moving to a formalized plan with a hefty messaging component that details not just Verb selling on Amazon but the process in general, in an attempt to educate consumers on the marketplace.
There are three main ways to sell beauty on Amazon. One is through Amazon Luxury Beauty, where some brands are invited to sell to the e-tailer directly. The other two options — merchant-fulfilled, where the seller is in charge of packing and fulfillment, and fulfillment by Amazon, where the Internet company packs and fulfills, but the seller still owns the inventory — are part of the Amazon Marketplace.
Verb is using FBA, which means it will ship products to Amazon, and the online firm will be in charge of fulfilling orders. Most of Verb's products will cost $18 ($2 more than in its other channels) and of that, Amazon takes $5.89 per product, including a $3.19 FBA fee, according to Verb.
At Verb, the Amazon conversations started internally in May 2017. In January, when Verb set up its Amazon account, it chose a name other than Verb — EasyBeauty — so it could operate under the radar.
“Amazon knew it was us,” Moses said. “We were brand-registered and it was under all of our information, we proved we were the brand…but we weren’t quite ready to slap our name on it because we wanted to figure out what happens.”
Launching as EasyBeauty allowed Verb to test certain things — like competing on price — and learn about winning the buy box, which it has been able to do roughly 35 percent of the time, even without competing on price, according to the company.
To educate consumers on how the Amazon launch (and the e-tailer in general) works, Verb created an explainer-style blog post written mostly by its Amazon lead, Synda Machalani, who joined the brand specifically to tackle Amazon. The post ends with Verb's official name on Amazon — Verb Haircare — and a video that shows how customers can make sure they're getting product straight from Verb.
"Instilling a little bit of fear in the client that you're going to get something that’s not authentic is part of our messaging," Moses said.
Having similarly open conversations with distribution partners was also part of Verb's plan. So, in June, the brand started telling each retail and distribution partner about its Amazon plans. Those conversations included telling distributors they were going to be held to their contracts and not allowed to sell directly into Amazon warehouses, and having salon partners sign minimum-advertised price policies.
"If anything, the Amazon space is just going to create more brand awareness," Moses said. "The conversations have gone well, and for the most part, people get it."
Moses notes that selling directly on Amazon will give Verb more control of the brand. Now the company can control product descriptions, all imagery and the Amazon storefront for Verb Products. The move should also help guard against fake products, which have been a problem for Verb in the past and have caused negative reviews.
"Now that we're brand-registered, we can control all of this and once we locked in everything, no one's allowed to change it," Moses said.
For Verb, Moses said the Amazon launch is mainly to make sure the end consumer has a good product experience, but it allows Verb to capture part of the share of products that is already circulating on the Amazon marketplace. It also gives the business an opportunity to compete more broadly in hair on Amazon, she noted.
"There’s the potential of 8,400 units being sold every month, but there’s also potential of the millions of shampoos being sold every month. So, step one, step two,” Moses said.
Keys to Verb's Amazon Launch Strategy
• Set up on Amazon to build account equity. Verb sold product through an account called EasyBeauty before it was ready to switch the name to Verb Haircare in order to start building up product reviews. This also allowed the brand to gain control over product imagery and descriptions.
• Hold distributors to the contracts they sign. That means they can no longer sell directly into Amazon warehouses.
• Resellers sign a MAP policy that says they aren't allowed to sell Verb's products for less than $16.
• Conduct marketing efforts to educate consumers to get them to buy from the Verb Amazon account.
Verb's Amazon Launch Timeline
• May 2017: Amazon research began.
• January 2018: Verb launched on Amazon under the EasyBeauty alias.
• April 2018: Prep for a full Amazon launch began, including tightening distribution, adding to the Verb team, enhancing content, managing logistics, etc.
• June 2018: Verb told existing distribution partners about its Amazon launch.
• August 2018: Verb officially launched on Amazon as Verb Haircare.
Source: Read Full Article

Related posts:
08/08/2018 Beauty & Balance Comments Off on Behind the Scenes of an Amazon Beauty Launch
Diets News